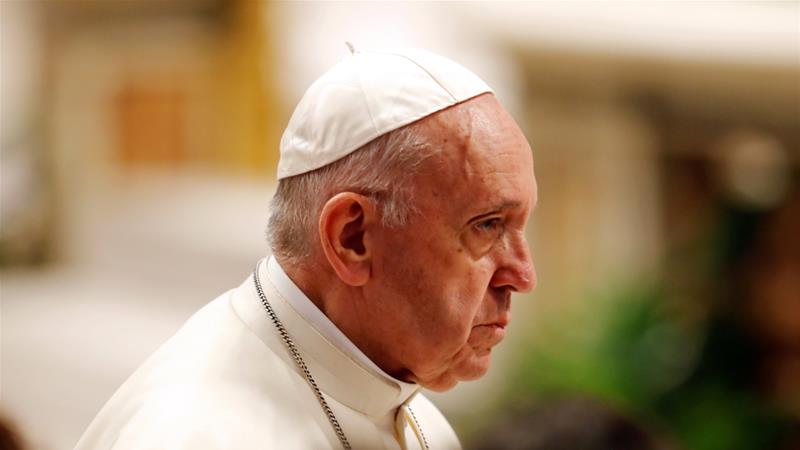 Pope Francis has enacted sweeping new laws to prevent child sexual abuse within the Vatican and other Holy See institutions in Rome, as well as by its diplomatic corps around the world.

The introduction of the legislation on Friday comes amid efforts by the Roman Catholic Church to tackle a series of recent scandals in Europe, North America, Latin America and Australia involving widespread claims of abuse – and cover-ups – by clergymen and lay members.

The new rules require officials and employees in the Vatican City State as well the Roman Curia, the central administration of the Roman Catholic Church, to immediately report any abuse against minors and vulnerable people or face fines or a prison sentence.

Anyone convicted of abuse must be “removed from office” under the legislation, which sets a statute of limitations for such crimes at 20 years from the date victims turn 18.

Francis said in a letter released with his “motu proprio” decree that it was the duty of everyone “to generously welcome children and vulnerable persons, and to create a safe environment for them”.

Previous church guidelines on handling sexual abuse cases did not cover officials and employees in Vatican City or the Curia.

The new legislation also mandates increased training for the affected staff on how to prevent abuse. A new service will also be set up to provide victims and their families with medical, psychological and social support.

While there are only several dozen minors who live inside the Vatican, the articles specifically mention a pre-seminary on the Vatican grounds where a boy alleged in 2017 that he had been abused by another minor and blamed inadequate supervision.

The law also applies to Vatican diplomatic missions, which have been involved in scandals in the past. In 2013, Archbishop Jozef Wesolowski, the Vatican’s ambassador to the Dominican Republic, was charged with paying boys for sex. He was recalled and jailed in the Vatican but died in 2015 before his trial.

The string of scandals have reached the upper echelons of the Vatican itself with the conviction of Cardinal George Pell, jailed this month for six years for abusing boys in his native Australia.

He had served as the Vatican treasurer and a member of the pope’s innermost council of cardinals until his conviction last year.

Other senior Church officials have been accused of knowingly covering up abuse, including the archbishop of Lyon who was convicted this year in France for failing to report abuse.

Senior bishops from around the world held a crisis summit last month to chart a strategy for ending abuse.

Addressing the summit, Francis said the Church would stop covering up the crimes of paedophile priests “as was usual in the past”.

Victims said the conference was merely a restatement of old promises.