US secretary of state vows to counter Iran, hails ‘outstanding’ ties between Trump and Netanyahu in pre-election visit. 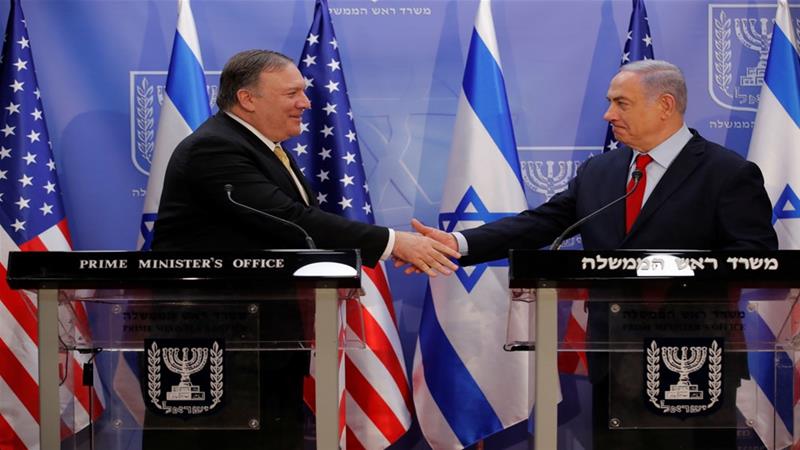 US Secretary of State Mike Pompeo and Israeli Prime Minister Benjamin Netanyahu have hailed strong ties between the two countries and vowed to counter Iranian “aggression” as the pair met in Jerusalem, weeks before Israel’s election.

Pompeo’s visit on Wednesday and warm words on Netanyahu’s leadership was widely seen as a boost for the Likud chief at the height of a tight re-election campaign.

The Israeli prime minister, who is facing a tough election challenge from a popular former military chief and reeling from a series of corruption allegations, has repeatedly sought to focus attention on his foreign policy record and ties with US President Donald Trump.

Netanyahu will visit Washington next week, where is set to meet Trump twice.

Speaking at a press conference, Pompeo and Netanyahu made no mention of the heated Israeli election campaign.

He accused Iranian leaders of seeking the “annihilation and destruction” of Israel and pledged continued American support for the country.

“With such threats a daily reality of Israeli life, we maintain our unparalleled commitment to Israel’s security and firmly support your right to defend yourself,” said Pompeo.

The Israeli people should have confidence that Trump, who is due to present a peace plan after the Israeli vote, will maintain a “close bond” with Israel, he said.

“I know that you and the president have an outstanding working relationship,” Pompeo said, addressing Netanyahu. “He sent me here to build upon that and to represent him here.”

For his part, Netanyahu thanked Pompeo for the Trump administration’s strong stance against Iran, which Israel regards as an existential threat.

The Israeli leader said he was working closely with the US “to roll back Iranian aggression” in the region and around the world. He also welcomed the US’s withdrawal from an international nuclear deal with Iran last year, as well as the tough sanctions Washington re-imposed on Tehran.

“This pressure is working,” he said. “We need to increase it. We need to expand it.”

Netanyahu is one of Trump’s strongest backers on the global stage. Since taking office, Trump has upended US policy and taken a series of steps welcomed by Israel, most notably by recognising Jerusalem as Israel’s capital and moving the US embassy there from Tel Aviv.

The controversial step prompted Palestinian leaders to sever ties with the White House, and reject the US as a broker in the stalled Israeli-Palestinian peace process.

Pompeo arrived in Jerusalem after a stop in Kuwait, where he renewed calls for a resolution to the ongoing Gulf crisis between Qatar and four other Arab nations.

Kuwait has been attempting to mediate an end to the crisis.

Pompeo said the dispute that has roiled the Gulf Cooperation Council for almost two years is hindering efforts to combat regional threats, including Iran.