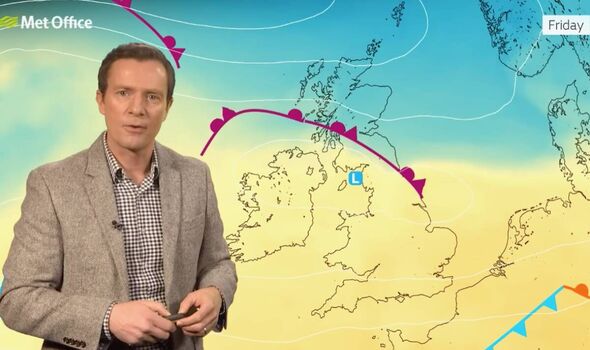 Tropical gusts from the Canary Islands will keep thermometers through the next 24 hours hovering above average. However, freezing Arctic air will spill into northern regions tomorrow engulfing much of the country by the weekend.

It will tussle mild air still nudging in from the south unleashing snow at the battle front, according to the Met Office

But after weeks of uncertainty, forecasters can now confirm snow on Christmas Day is ‘guaranteed’.

Jim Dale, meteorologist for British Weather Services, said: “By the end of the week the northerly airstream will have moved into Scotland as the Polar front shifts back over the UK.

“This could bring snow or sleet to the region before the cold air sinks into northern England by Saturday, and there will be more showery rain across the country through the end of the week.

“By the time we get to Christmas Eve, low pressure will have gone, and that northerly air will be across most of the country.

“It might be that the far south and the southeast may just escape and stay slightly milder.

“In terms of snow on Christmas Day, we can now be sure of something across parts of Scotland.”

Heavy flurries could arrive as early as Thursday as Polar air sweeps the country sending temperatures into freefall.

James Madden, forecaster for Exacta Weather, said: “It is becoming increasingly likely that we will see a return to cold conditions and the risk of snow in time for Christmas.

“Temperatures will start to drop from Thursday brining wintry downpours to the north, and these could become more widespread by Christmas Eve and Christmas Day.

“We can now say that for large parts of the north at least, a true White Christmas is on the cards.”

Bookies have continued to slash the odds on a Yuletide dusting with William Hill putting Leeds, Manchester, and Belfast odds on for Christmas snow.

Spokesman Lee Phelps said: “The north of England may have to start bracing for a white Christmas, as the odds of snow hitting Leeds and Manchester on Christmas Day have shortened significantly over the last 24 hours.

“Plummeting to 4/9, it is looking increasingly likely Leeds and Belfast will be hit by snow, and at 4/7, Manchester is also odds-on for a white Christmas.”

Ladbrokes spokesman Alex Apati added: “White Christmas odds have plummeted with the temperatures over the last few days, and we now look nailed on to see snow throughout the UK next Sunday.”

A ‘scrap’ between mild air from the south and cold northerly winds will set the scene for Christmas, according to the Met Office.

The most likely scenario is a weather front bringing snow across Scotland and northern England.

Met Office meteorologist Alex Deakin said: “Come the end of the week we have cold air sitting across parts of the north and mild air sitting to the south, and this is the big scrap that is going to take place between the mild and the cold as we go through the Christmas period.

“On Thursday, wind will be coming up from the south and coming down from the north, and we are starting to see the set-up of cold versus mild weather patterns, and that continues into Friday.

“Rain will move in but as it hits the cold air it could provide some snow for a time.”

A fierce jet stream fired up by cold conditions over the United States will push milder regions of low pressure towards the UK, he said.

He added: “There are a few areas of low pressure all being pushed along by the jet stream.

“But further north, the cold air is trying to push down.”

Despite continued uncertainty over how far south snow reaches by the weekend, Scotland is promised a White Christmas.

Jim Dale, an independent adjudicator for some of the bookmakers, said: “If you want a guaranteed White Christmas, head for the glens and the highlands of Scotland.”