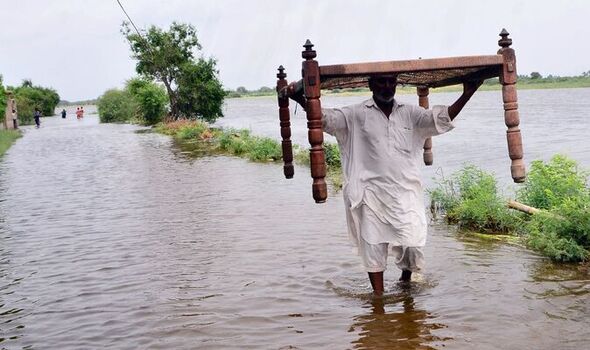 The nation has seen its worst flooding in more than a decade, described by one official as a disaster “of biblical proportions”. Thousands more people are injured, with an estimated 33 million citizens directly affected.

He said: “Pakistan has been grappling with economic issues, but now just when we were about to overcome them the monsoon disaster hit.”

Officials in the country have blamed climate change for the devastation.

Among the worst hit areas is the northwest of Pakistan where thousands of people fled their homes after rivers in Khyber Pakhtunkhwa province burst their banks, causing powerful flash floods.

Many saw their homes washed away.

Resident Junaid Khan, 23, said: “The house which we built with years of hard work started sinking in front of our eyes.

“We sat on the side of the road and watched our dream house sinking.”

The province of Sindh in the south-east of the country has also been badly affected, with thousands displaced from their homes.