In 2018, Bangladesh launched a ‘war on drugs’ after the proliferation of illegal substances, mostly pills called ‘yaba’. 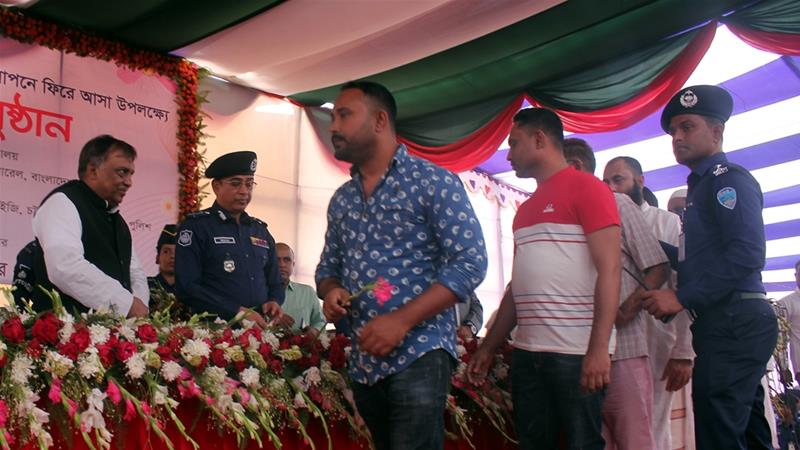 Dhaka, Bangladesh – Over 100 Bangladeshi drug dealers have surrendered to the authorities at a pre-scheduled ceremony in a coastal town seeking clemency and vowing to go back to a normal life.

The unprecedented event on Saturday was prompted by a Philippines-style massive anti-narcotic crackdown, which led to the killing of nearly 300 people and arrests of about 25,000 others since May of last year.

Bangladesh last year launched a “war” on drugs following a proliferation of illegal substances in the South Asian nation of 165 million people, mostly of cheap methamphetamine pills known as “yaba”.

Those who surrendered before the country’s Home Minister Asaduzzaman Khan at Teknaf town in the coastal Cox’s Bazar district included drug traders, traffickers and several “godfathers”.

They surrendered a total of 350,000 vanilla-scented, pink-coloured pills of “yaba” – which derives its name from a Thai word that means a “crazy medicine” – and dozens of illegal firearms.

“I was leading my life towards a wrong path. I regret my past activities,” said Sirajul Islam, one of the drug traffickers who surrendered.

“I want your blessings so that I would be able to live a better life and work for building a drug-free society.”

Islam hails from Teknaf, a southeastern coastal town bordering Myanmar, which is known as a hub of “yaba” smuggling and trading.

He was named in the list of 1,151 “yaba” traders prepared by the country’s Ministry of Home Affairs after the proliferation of the pills in the past few years.

Of those traders, 73 were named the “yaba godfathers”. On Saturday, a total of 24 such godfathers surrendered, police sources said.

Data from the country’s Department of Narcotics Control said some seven million people use drugs, with “yaba” the most popular substance.

In May of last year, Bangladesh started a Philippines-style war on drugs after Prime Minister Sheikh Hasina declared a zero-tolerance policy against illegal drugs.

In October, Bangladeshi authorities made “yaba” a class-A banned substance and the country’s parliament passed a law allowing the death penalty for those dealing in the drug.

“This formal surrender is a part of the government’s ongoing war against drugs,” said Home Minister Khan at the programme. “Those who surrendered would be given a second chance to live a normal life.”

“Those who haven’t surrendered yet would face dire consequences,” he warned.

Inspector General of Bangladesh Police Javed Patwary said the government will “sincerely try to ensure a better life to those who surrendered today, and if needed they will be rehabilitated”.

“The police will also advocate for lesser sentences for them,” said Patwary.

Cox’s Bazar police superintendent ABM Masud Hossain told Al Jazeera that the surrender of drug dealers was conditional and their ill-gotten wealth would be investigated by the authorities.

“They will not receive any general amnesty but will have to face legal action as per the law,” said Hossain, adding that two separate cases (for drugs and arms) will be filed against those who surrendered and they will be jailed.

When asked whether there would be any more public surrenders like this, Hossain said, “There might be. Our war against drugs hasn’t ended with these surrenders. There are still a lot of traders out there.”

“I believe those killings instilled fear among the drug dealers, thus this public surrender has happened.”

Like the Philippines, Liton said, the current Bangladesh regime wanted to create a public spectacle out of this “war on drugs”.

“What we need to monitor is whether this war would really reduce the proliferation of drugs in Bangladesh,” said Liton.