Few options remain for people in shelters – too afraid to go home and with little hope of resettlement. 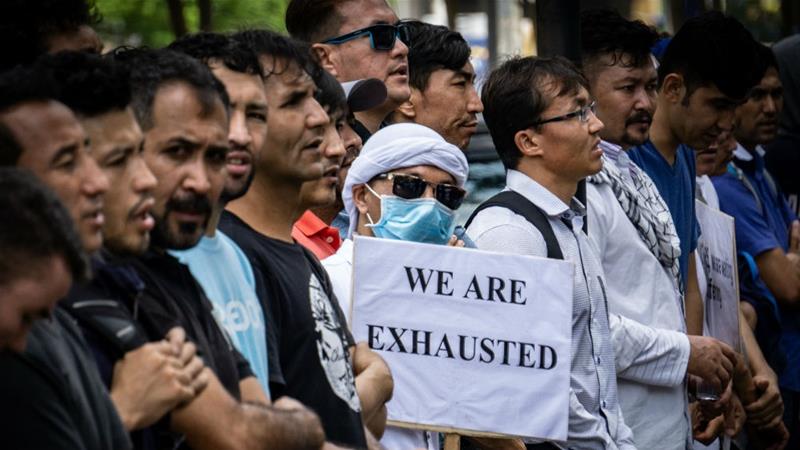 Makassar, Indonesia – Earlier this month Sajad Jacob, an asylum seeker from Afghanistan who had been living in an Indonesian detention centre for nearly two decades, died in the hospital. The 24-year-old had doused himself in petrol and set himself on fire.

Jacob was a Hazara, a Shia Muslim minority that has suffered violent persecution in Afghanistan.

“I tried to help as much as I can because I also care and have humanity,” Arthur Mawikere, head of the detention centre in Manado where Jacob and his family were living, told Al Jazeera. Mawikere said he didn’t know whether Jacob’s self-immolation was deliberate.

Jacob’s family had fled Afghanistan when he was a child and had been in Indonesia since 2000. They had tried at least twice to be recognised as refugees by the United Nations High Commissioner for Refugees (UNHCR), but had been rejected on both occasions.

The refugee agency offered to hear their case again last year but the family refused, instead taking to social media and hunger striking to demand immediate refugee status. Without the protection of being an asylum seeker, they became “illegal immigrants” at risk of deportation.

Jacob’s family members remain in detention. They could not be contacted because their phones had been confiscated.

There are increasing reports of mental health problems among the 14,000 people – asylum seekers and even those recognised as UN refugees – who now live in limbo in Indonesia. Most exist in immigration-controlled housing in a twilight world where they cannot work or get an education, and have little hope of resettlement elsewhere. Just 556 refugees got to leave Indonesia to start a new life in a third country last year.

Many find themselves in the archipelago as a result of Australian policies designed to deter people from arriving in the country by boat.

Since 2000, Australia’s government has funded the International Organization for Migration (IOM) in Indonesia, which handles relief for the UNHCR in Indonesia, part of a campaign to discourage people from trying to get to Australia by sea and claim asylum. Those who arrive by boat are sent to remote offshore camps on Nauru and Manus Island for “processing” with no chance of ever being resettled in Australia – even if they are found to be refugees. 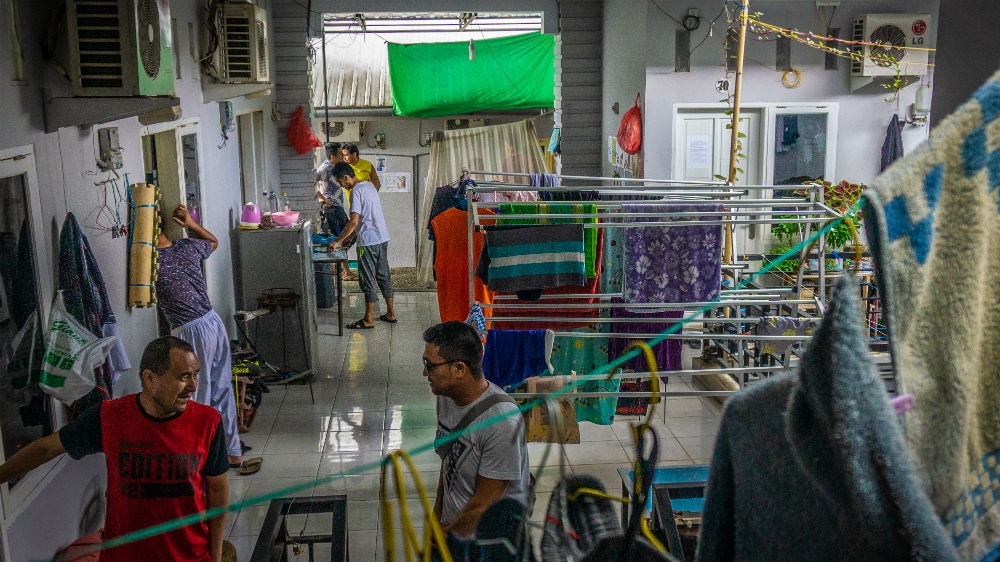 According to the UNHCR data, in 2017, Australia’s financial support for the IOM in the archipelago was more than three times its contribution to the refugee agency globally.

But now that funding is being reduced too.

“The reduction in IOM funding, which was used in part to provide emergency relief and shelter for refugees, has left people stranded and destitute,” said Asher Hirsch, senior policy officer with the Refugee Council of Australia. “This, combined with the lack of rights in Indonesia, has caused significant mental stress for refugees stranded in Indonesia.”

After the UNHCR decides a person is a refugee, the IOM manages their life in Indonesia until they can be resettled, providing them with a monthly allowance – $90 for an adult and $36 for a child.

This month, the Australian government said it would reopen its detention centre on Christmas Island, an Australian territory just south of Indonesia, after parliament passed a law allowing those confined to Manus and Nauru to be brought to Australia for medical treatment if doctors said it was necessary.

The move ratcheted up an already restrictive immigration environment ahead of Australian elections due by May.

Mark Getchell, the IOM’s chief in Indonesia, said Australia’s decision to cut its assistance to the Indonesia programme could have been recognition that served as a “pull factor” for refugees.

The Australian government declined to respond to Al Jazeera’s specific questions on its policies in relation to asylum seekers and refugees in Indonesia.

In a statement, a spokesperson for the Ministry of Home Affairs said its funding to IOM had “successfully supported irregular migrants in Indonesia while they pursue third country resettlement, where eligible to do so, rather than attempt the dangerous journey to Australia by boat”. 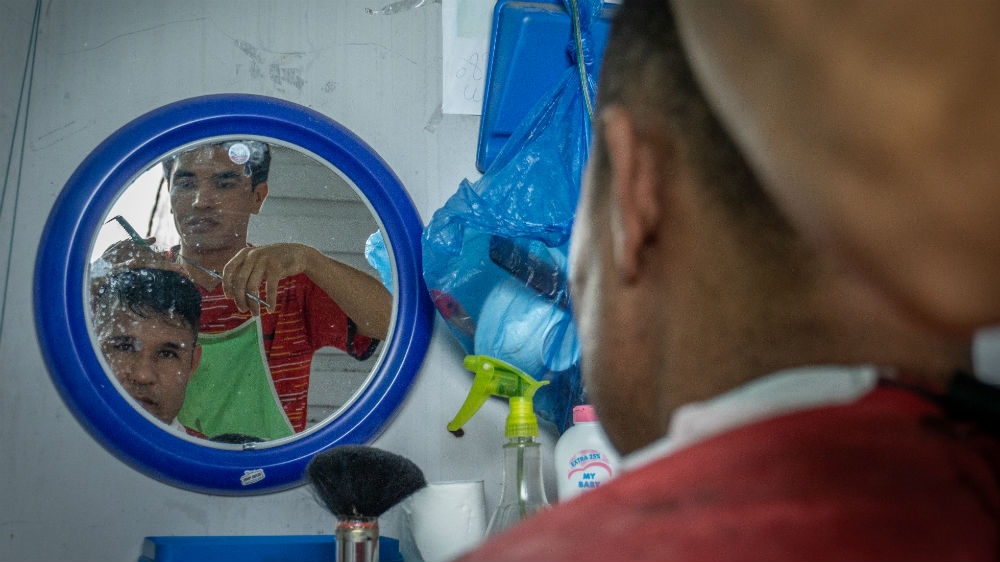 IOM stopped accepting new refugee applicants to the programme in March last year “to reduce the risk of irregular migrants drawn to Indonesia”, the spokesperson added.

Since 2010, Australia has been accepting an average of about 400 refugees from Indonesia each year, but that figure dropped to 85 in 2017-18, according to data provided to the refugee council following a Freedom of Information request.

Other countries are also accepting fewer refugees for resettlement too, and fearful of returning home – even with assistance from the IOM – the asylum seekers and refugees are instead living in IOM shelters run by immigration.

Almost 2,000 people are crammed into the hostels in Makassar, the biggest number after Medan, where rules include a 10pm curfew, no overnight stays outside the shelter, and a ban on protests.

Muhammad Joniad, a 25-year-old refugee and aspiring lawyer from Rakhine state in Myanmar, has gathered the stories of at least 17 people he says have died as a result of depression or a lack of medication. Jacob was the most recent entry on his list.

Like many, Joniad likens life in Indonesia to an “open prison” and is losing hope.

“I cannot tell my family the truth about here, because they are already suffering enough,” said Assadullah Amiri, 29, another Hazara refugee. “And now after six years, we’re told we’re still not vulnerable enough to be resettled?” 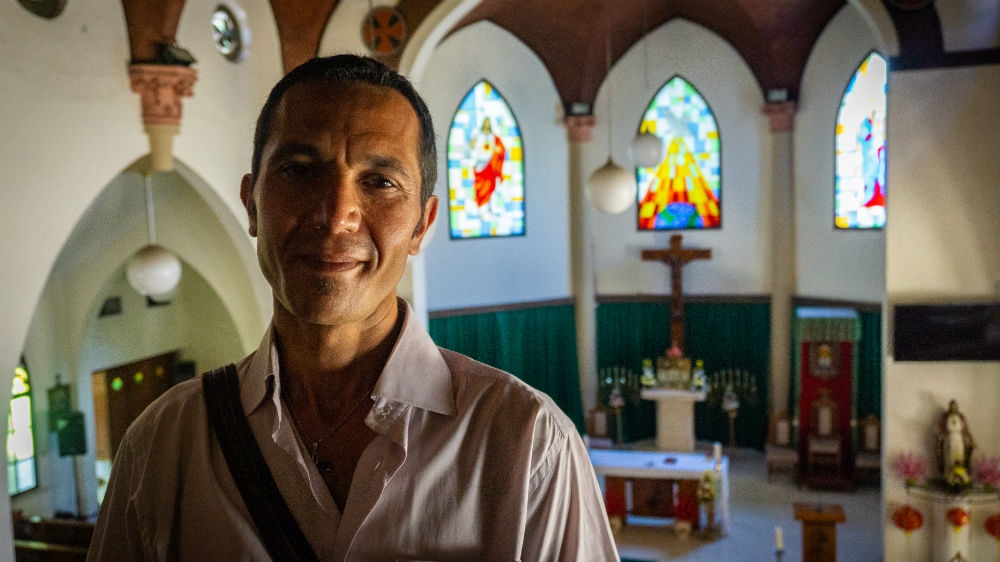 Those living in Makassar say they can be returned to immigration detention for unknown lengths of time, their stipend suspended for breaking any of the rules. Getchell said the IOM does not support such arbitrary, indefinite detention.

“Domestic law governs the legal status of immigrants in Indonesia, but makes no reference to asylum seekers or refugees,” Hirsch said. “Instead, the law focuses on criminalisation, describing any person without a visa as an ‘illegal immigrant’.”

Refugees in Makassar have resorted to social media and twice-monthly demonstrations in front of the UNHCR and IOM offices to press their case.

John Arash Sedigh, a Christian convert from Iran, has been there almost every morning since September.

He arrived in Indonesia with his wife in 2012 and after trying twice to get to Australia has been living for the past five years in the IOM shelter.

Sedigh has given up on getting a boat out of Indonesia, and says his family’s situation has become a kind of mental torture. His wife and young son rarely venture out of the tiny room they share and he says his wife is having suicidal thoughts.

“If there was hope, it would be better,” said Sedigh, 40. “But when there is no option to go back, to stay as a human, or to get resettled, maybe we will all end it ourselves.” 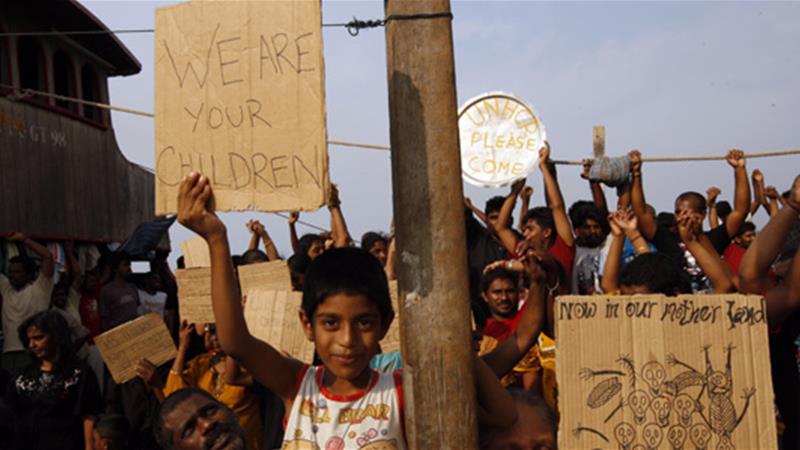