JUBA (Reuters) – Former rebel leader Riek Machar was sworn in as South Sudan’s first vice president on Saturday after he agreed to form a unity government with his long-time rival President Salva Kiir, a move that could end years of fighting in the country. 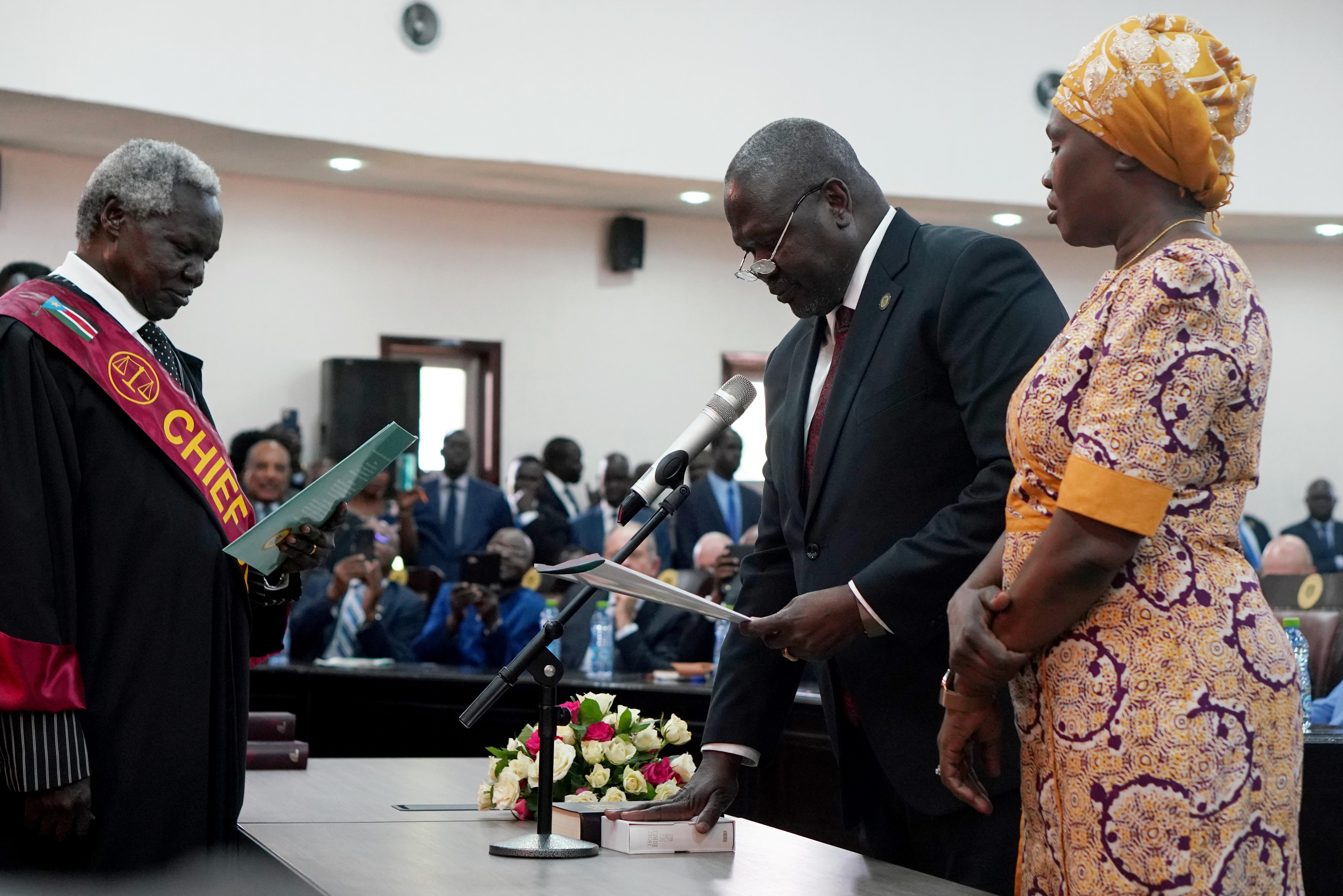 Kiir and Machar had repeatedly pushed back deadlines to form a government of national unity, a core component of a peace accord signed in 2018. The civil war killed 400,000 people and triggered Africa’s biggest refugee crisis since the 1994 Rwandan genocide.

Dressed in a black suit with a white shirt and red tie, Machar stood next to his wife Angelina Teny and took the oath of office in front of Kiir. Chief Justice Chan Reech Madut administered the oath.

Three other vice presidents were also sworn in at the ceremony.

“I want to assure you (the people of South Sudan) that we will work collectively to end your long suffering,” Machar said.

Kiir also expressed optimism for the future, even as analysts warned that the country still faces huge challenges achieving a durable peace.

South Sudan gained independence in 2011 but descended into fighting two years later when forces loyal to Kiir and Machar clashed in the capital.

“This action signifies the end to the war,” Kiir told the gathering of dignitaries and journalists. “Peace has come and it has come to stay.”

“My brother Dr. Machar and I are now partners in the peace agreement.”

Kiir met with Machar at State House in Juba on Thursday, saying afterward that a government will be formed and they will resolve outstanding issues, such as the unification of the army, in the coming days. Kiir named Machar as his first vice president on Friday.

“Forming a government is a significant step and one in which we should be optimistic about,” Peter Martell, who has written a history of South Sudan, told Reuters. “But creating peace is more than just about forming a government. The country has been wrecked by civil war, enormous challenges still remain.”

Security is one of the challenges, with the unification of the army key among them, and reining in other militia groups outside the deal, Martell said.

The country is almost entirely dependent on oil for revenues, and a binding peace agreement could unlock its reserves. Output currently stands at 180,000 barrels per day down from a peak of 250,000 bpd before the outbreak of the conflict in 2013.

“The time for war is finished, now is time for peace and development,” said Arkanjelo Tout, a resident in Juba, said on Friday. “I am expecting the new government to put the interest of its people first.”

“We are hoping that the new unity government would address the root causes of conflict to avoid going back to war again,” Angelo Wani, another Juba resident, told Reuters.

Resolving issues such as the return of refugees and economic reforms are critical to long-lasting peace, said James Okuk, a senior researcher at the Juba-based Center for Strategic and Policy Studies.

“People will be watching and will be criticizing whoever is lazy to deliver on time,” he said. “Every citizen is expecting that this should be a serious government.”

There is rampant corruption, militias are being armed and civilians deliberately starved, the Commission on Human Rights in South Sudan said in its report. More than half of the population of 12 million face food shortages, it said.

Kiir called on those who are not part of the peace accord to join in what he called “the way to reconciliation.”

“I want no more bloodshed in South Sudan.”