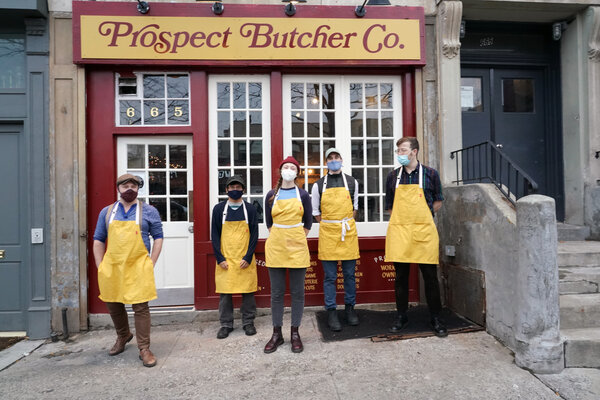 Personal need often drives the establishment of small, specialized food companies. Corey Hammond, who works in e-commerce and consulting, moved to Prospect Heights, Brooklyn, four years ago and missed having a convenient butcher. Then, as restaurants like Faun, Oxalis and Olmsted began opening in the neighborhood, he thought a local butcher might be welcome. He connected with Greg Brockman, who left Forager’s Market in Dumbo. In May, they opened a weekend pop-up butcher in the kitchen of Faun, and its success justified their idea. Now, they have opened their own butcher selling nose-to-tail meats from a number of local farms, 32 to 230 miles away as listed on their website. “We couldn’t have gotten started without the pandemic,” Mr. Hammond said. “The restaurant kitchen wouldn’t have been available for our pop-up.” The shop is worker-owned. “I wanted the people who helped to build this business to get something out of it,” Mr. Brockman said. “The food business is really difficult, and this way we can pay a decent wage and know the workers would be more dedicated.” There are three other people involved in the shop. In addition to a variety of cuts of meat and poultry, the shop will offer rotisserie chickens, charcuterie, condiments and seasonings, and sandwiches. Rebecca Brooks, one of the employees, worked at Dickson’s Farmstand Meats in Chelsea Market and has visions of making whipped lardo, headcheese and scrapple.

Harris Salat, who closed his ramen shop in Downtown Brooklyn in 2018 after six years, has reopened it from a ghost kitchen in TriBeCa. In partnership with RBM Restaurant Group, the owners of Sarabeth’s and others, his signature ramen bowls like Ganso Shoyu with braised pork belly, spicy miso ramen, and braised short rib ramen are available for delivery to the financial district, TriBeCa, SoHo, Greenwich Village and the West Village. Delivery to the Upper West Side and parts of Brooklyn is coming. In addition to ramen, the menu also includes gyoza dumplings, kimchi buns and a $48 Tokyo roast chicken dinner for four.

Chef in Residence at Stone Barns

Last August, Dan Barber, the chef and a partner in Blue Hill at Stone Barns, a restaurant, catering establishment and farm in Pocantico Hills, N.Y., announced that he would be stepping away from running the restaurant at the end of 2020 and would start this nonprofit chef-in-residence program. It would be a collaboration between the Stone Barns Center for Food and Agriculture, the nonprofit organization that operates the farm at Stone Barns, and Blue Hill restaurant. It’s now a fait accompli. The idea was to provide a showcase for chefs who have lost their jobs as a result of the pandemic. Mr. Barber is involved in managing the program; he will continue to participate in catering and special dinners at Blue Hill at Stone Barns. The first chef in the residency program from Jan. 13 to Feb. 6, will be Shola Olunloyo of Studiokitchen in Philadelphia. He plans to serve Nigerian-inspired fare, like spiced carrot soup with guinea pepper and ginger leaves; steamed cranberry bean cakes with lobster, habanada oil and country ham; fish with a green mango condiment, Uziza pepper and file grits; and spiced goat cooked in hay with rice steamed in turmeric leaves. All the chefs will interpret the food of a region with which they are familiar, using Hudson Valley ingredients. The pastry chef, Bill Yosses, will work with him into creating desserts. Following Mr. Olunloyo, from Feb. 17 to March 13, will be Omar Tate from Honeysuckle in Philadelphia; from March 17 to April 10, the chef will be Johnny Ortiz, who was at Saison in San Francisco; and from April 14 to May 8, the chef will be Victoria Blamey, formerly of Gotham Bar and Grill. The dinners in the dining room of Blue Hill from Wednesdays through Sundays, and lunches Saturdays and Sundays, will be $250 per person, including paired drinks. Prepayment of $1,000 will guarantee seats for all of them. (With social distancing, the room can accommodate only 30 people.) The visiting chefs will also participate in an educational component to the program that will be open to the public, and in the food box delivery program at this restaurant and at Blue Hill in Manhattan, where Mr. Barber has also stopped cooking for now. He said he expects the Blue Hill restaurants to eventually reopen.

Cuisine Solutions, a company in Sterling, Va., that specializes in sous-vide products mostly for food service, is now selling its prepared dishes for delivery from a Pret A Manger outlet. The project is a partnership with the sandwich chain. They call what they’re doing a dark assembly kitchen, or DAK, which is like a ghost kitchen but one where all the cooking amounts to reheating sous-vide preparations, nothing from scratch. The company offers its food in a number of categories like The Cutting Edge for a global menu including harissa-charred octopus; Cocina Oscura for Mexican fare; Mediterranean; and Poultry in Motion. Bodega by CS DAK sells sous-vide dishes like veal osso buco for the consumer to reheat at home. Burgers, Asian and vegan food are coming.

This diner-style Upper West Side staple, founded in 1951 at 66th Street and Amsterdam Avenue, closed in 1990 and reopened a block away in 1998, fell victim to the pandemic in September. It had been a favorite of many people connected with ABC News nearby, as well as Juilliard students and notables like Kevin Kline and Mikhail Baryshnikov. Now Louis Skibar, the restaurateur who is an owner of the Toloache restaurants, among others, and who started working at Old John’s in 1984 when he was 16, is reopening it soon. It will have a comfort menu with the chef, Grayson Schmitz, who worked at Jean Georges and Fiamma, in charge. Tanya Nganan, who was at Maze by Gordon Ramsay, will be doing pastry. It will have a bar. Whether the tables will be draped in white cloths at dinner, as was once the practice, remains to be seen.

This Mexican restaurant, which Josefina Howard first opened on the corner of 58th Street and First Avenue in 1984, will be returning to Midtown East, on two levels with additional patio seating. The owners, TriSpan Rising Stars, expect to open in the spring. The location at Lincoln Center remains open with outdoor seating, and Union Square is expected to reopen soon. Its restaurants outside New York remain open.