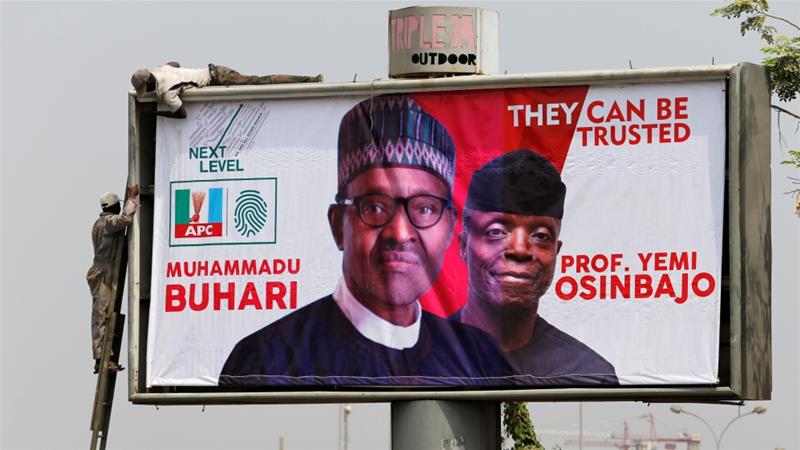 Abuja, Nigeria –  Nigeria’s top two presidential candidates have wrapped up their campaigns with big rallies in front of enthusiastic crowds, making their final pitches to voters and reiterating their commitment to holding peaceful elections.

As campaigning drew to a close on Thursday, President Muhammadu Buhari, of the ruling All Progressives Congress party,  and his main challenger, Atiku Abubakar, of the Peoples Democratic Party, addressed supporters in their home states of Katsina and Adamawa, respectively.

The election on Saturday is seen as one of the closest in Africa’s largest democracy, with Buhari facing a strong challenge from Atiku, a former vice president.

The two main candidates have vowed to fix the economy, bring security and create more jobs in Africa’s most populous country.

Security is a major concern before the vote, with fears of clashes between rival supporters.

Campaigning, however, has so far been relatively peaceful.

In a statement broadcast nationwide as campaigning ended, Buhari said Saturday’s vote would take place under a “secure and peaceful atmosphere”.

“It was indeed such free, fair and peaceful elections that made it possible for our government to emerge despite the fact the fact that they were contesting against a long-standing incumbent party,” Buhari said.

“Any comments or threats of intimidation from any source do not represent the position of the federal government of Nigeria,” he added, in the wake of inciting comments by some ruling party officials and opposition leaders.

“It shows he is a father of the country and does not want any trouble at all. Let other politicians respect the voters so that there will be peace everywhere,” he said.

Nigeria has a history of election-related unrest and both Buhari and Abubakar appear keen to prevent a repeat of the events in 2011, when 1,000 people were killed in clashes after the results of that year’s vote were announced.

Meanwhile, the electoral commission charged with organising the election said it was on track for a smooth operation.

A voter, Sani Usman, said he is happy not much violence was recorded during the campaigns.

“There were rumours of bloodshed before the election campaigns began,” Usman told Al Jazeera.

“We hope there will also be peace on Saturday when we go out to vote.”

A total of 73 presidential hopefuls are contesting for the country’s top seat.

More than 84 million voters out of a total population of nearly 200 million are registered to vote in Nigeria, the continent’s leading economy and its top oil producer.

Nigeria has one of the fastest-growing populations in the world, with 5 percent of the electorate between the ages of 18 and 35.