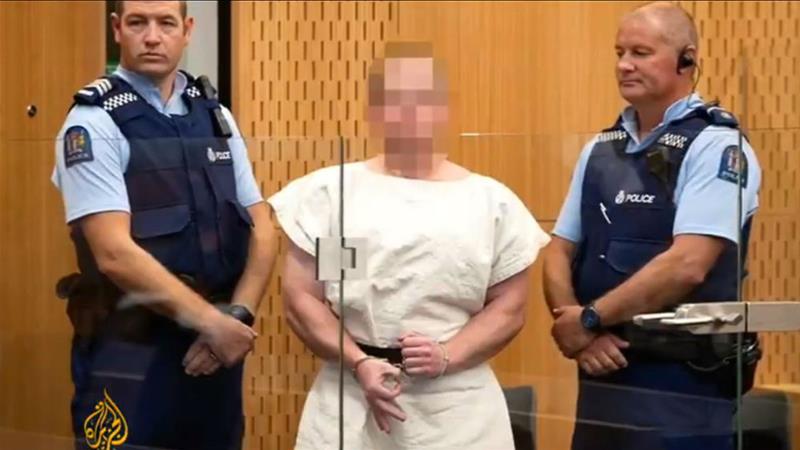 The Australian suspect accused of shooting dead dozens of Muslim worshippers in two mosques has appeared unrepentant in court in New Zealand, staring down media members with a smirk on his face.

Brenton Tarrant, 28, appeared in a Christchurch District Court on Saturday and was charged with murder after the worst ever mass shooting in New Zealand’s history, which Prime Minister Jacinda Ardern condemned as “a terrorist attack”.

He was remanded without a plea until his next appearance in the South Island city’s High Court on April 5.

Handcuffed, shoeless, and wearing a white prison suit, Tarrant did not speak. His court-appointed lawyer made no application for bail or name suppression.

He flashed an upside-down “OK” signal, a symbol used by white power groups across the globe.

“He came into court, he didn’t say anything at all. He stood there looking directly at the media in the courtroom and was smirking throughout his appearance,” Thomas reported.

Judge Paul Kellar allowed photos to be taken but ordered that the face of the former fitness instructor be blurred to preserve fair-trial rights.

Two other suspects were taken into custody while police tried to determine what role, if any, they played in the cold-blooded attack that stunned New Zealand.

None of those arrested had a criminal history or was on any watchlist in New Zealand or Australia.

With 49 people killed in the mosque attacks, it was by far the deadliest shooting in modern New Zealand history. Funerals were planned on Saturday for some of the victims.

Medical staff said 39 wounded people were being treated in hospitals, 11 in critical condition including a four-year-old girl.

Victims were from across the Muslim world, including Saudi Arabia, Turkey, Jordan, Bangladesh, Indonesia and Malaysia. The dead included women and children.

Egypt’s emigration ministry said on Saturday that authorities in New Zealand confirmed the deaths of the four Egyptians, including two 68-year-olds. The ages of the other two victims were not given.

Jordan’s foreign minister said that four Jordanians were also killed in the rampage.

The weapons had been modified to allow the quicker discharge of rounds, she said.

“I can tell you one thing right now, our gun laws will change,” Ardern told reporters, saying a ban on semiautomatic weapons would be considered.

She said the suspect intended to continue the rampage before he was caught by police.

“The offender was mobile, there were two other firearms in the vehicle that the offender was in, and it absolutely was his intention to continue with his attack,” Ardern said.

“I’m not privileged to a full breakdown at this point but it is clear that young children have been caught up in this horrific attack,” she added.

New Zealand, with a population of five million, has relatively loose gun laws and an estimated 1.5 million firearms, or roughly one for every three people. But it has one of the lowest gun homicide rates in the world. In 2015, it had just eight gun homicides.

Tarrant posted a jumbled, 74-page manifesto on social media in which he identified himself by name and said he was a white supremacist who was out to avenge attacks in Europe perpetrated by Muslims.

The gunman also livestreamed the attack at Al Noor mosque, where he sprayed worshippers with bullets, killing at least 41 people. Several more people were killed in an attack on a second mosque in the city a short time later. Police also defused explosive devices in a car.

Authorities did not say whether the same person was responsible for both shootings.

Tarrant’s relatives in the Australian town of Grafton, in New South Wales, contacted police after learning of the shooting and were helping with the investigation, authorities said.

Tarrant has spent little time in Australia in the past four years and only had minor traffic infractions on his record.

On Saturday, outside one of the two mosques, 32-year-old Ash Mohammed pushed through police barricades in hopes of finding out what happened to his father and two brothers, whose mobile phones rang unanswered. An officer stopped him.

“We just want to know if they are dead or alive,” Mohammed told the officer.

In the aftermath of Friday’s bloodshed, the country’s threat level was raised from low to high. Police warned Muslims against going to a mosque anywhere in New Zealand, and the national airline cancelled several flights in and out of Christchurch, a city of nearly 400,000. 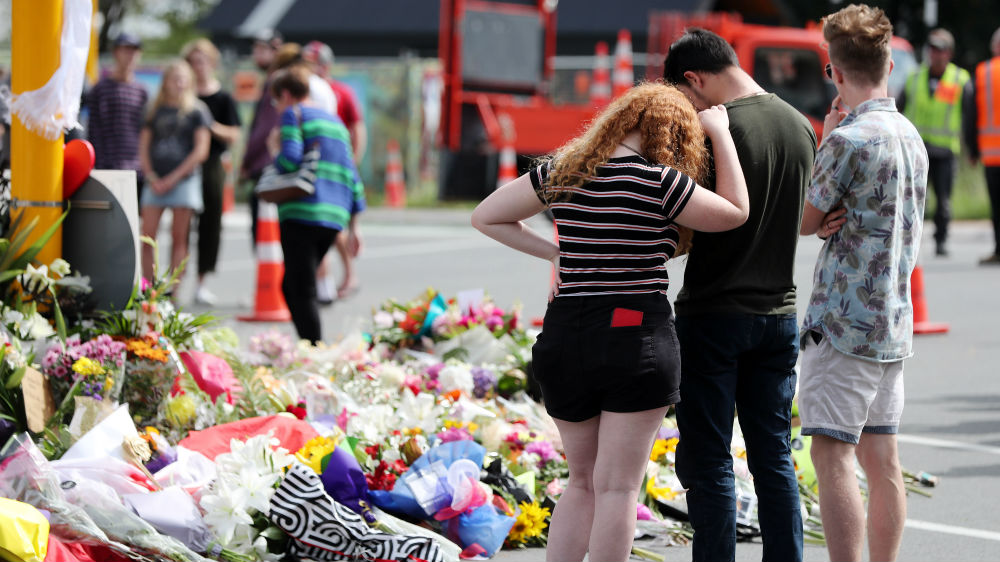 New Zealand is generally considered to be welcoming to migrants and refugees. On Saturday, people across the country were reaching out to Muslims in their communities on social media to volunteer acts of kindness – offering rides to the grocery store or volunteering to walk with them if they felt unsafe.

Muslims account for just one percent of New Zealand’s population, a 2013 census showed, most of whom were born overseas.

A website set up for victims had raised more than $684,000 in less than a day, and social media was flooded with messages of shock, sympathy and solidarity.

One image shared widely was of a cartoon kiwi, the country’s national bird, weeping. Another showed a pair of figures, one in a headscarf, embracing. “This is your home and you should have been safe here” the caption read.

The Al Noor mosque sits opposite a grand English-style park filled with towering oak trees. On Saturday morning, dozens of people stood silently, facing the building as police went about their work.

With the street closed, the only sounds to be heard were crickets and the occasional car engine in the distance. Occasionally, the sound of sobbing cut through.

A few hundred metres down the street where the alleged gunman drove after attacking the first mosque, bunches of flowers were slowly building in memoriam.

Many of those visiting this scene were migrants, newcomers to the city and a country that prides itself on its peace-loving nature.

Rizwan Khan, 32, originally from West Bengal in India, told Al Jazeera of his fortune when an appointment in town meant he was running late for his usual trip to the Al Noor mosque.

“Because I was running late I decided not to go,” said Khan. “I feel very grateful to God. I can’t imagine what would have happened. One of my friends called me, who I normally pray with in the mosque. And when I called him he just said he’d been shot in his shoulder.

“I was just saved by luck.”

Other stories were just as remarkable – for the wrong reasons.

Two young grief-stricken Muslim men described how their friend’s uncle came to visit him from India for a few weeks. He had gone to the Al Noor mosque the day before flying home, only to be shot in cold blood.

Facebook, Twitter and Google scrambled to take down the gunman’s video, which was widely available on social media for hours after the mass shooting.

In the video, the killer spends more than two minutes inside the mosque targeting terrified worshippers with gunfire. He then walks outside where he shoots at people on the pavement.

Children’s screams can be heard in the distance as he returns to his car to get another weapon. He walks back into the mosque, where there were at least two dozen people lying on the ground. 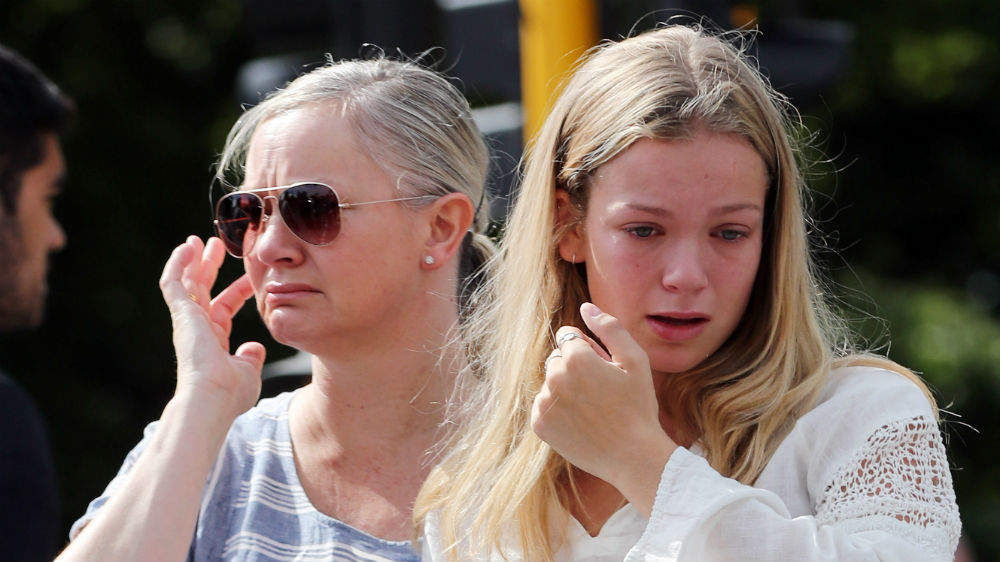 After going back outside and shooting a woman there, he got back in his car where a song can be heard blasting. The singer bellowed “I am the god of hellfire!” and the gunman drove off before police even arrived.

The second attack took place at the Linwood mosque about 5km away. Mark Nichols told the New Zealand Herald he heard about five gunshots and a worshipper returned fire with a rifle or shotgun.

The footage showed the killer was carrying a shotgun and two fully automatic military assault rifles, with an extra magazine taped to one of the weapons so that he could reload quickly. He also had more assault weapons in the boot of his car, along with explosives.

The gunman said he was not a member of any organisation, acted alone, and chose New Zealand to show even the remotest parts of the world are not free of “mass immigration”.

Bill Code contributed to this report from Christchurch