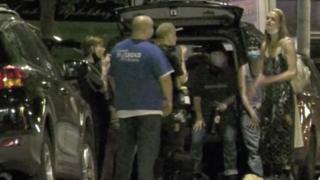 The arrest of a protester by New York City Police (NYPD) has led to outrage from officials and accusations of “kidnapping” by witnesses.

Footage of the dramatic arrest shows mostly plain-clothed men grabbing a woman and pushing her into an unmarked van during a policing protest.

The arrest on Tuesday comes amid furore over allegations of similar operations by federal agents in Portland, Oregon.

Marches against racism and policing have continued all summer in the US.

The NYPD later identified the suspect as 18-year-old Nikki Stone, saying she was wanted for vandalising police cameras near City Hall and spraying graffiti.

Ms Stone, a trans woman from Manhattan’s Lower East Side, was released early Monday morning to cheers from a crowd of protesters. She was issued an order to appear in court to face charges of vandalism and criminal mischief.

BREAKING: We're receiving reports that at least one protester was abducted off the streets today by unmarked “officers” — this time in New York City.

These dangerous, abusive, and indefensible actions must stop. Law enforcement must be held accountable. pic.twitter.com/I9VQo4Tvbx

The arrest took place on Tuesday evening at 25th Street and Second Avenue in Manhattan.

Footage shared on social media shows men in T-shirts and shorts grabbing a skateboarder and shoving her into a silver Kia minivan. It was unclear if the officers making the arrest had badges or any identifying information.

Uniformed police then rushed in and used their bicycles to form a barrier to keep other protesters back.

“We didn’t see where they came from,” one witness told the Gothamist, adding: “It was like a kidnapping.”

Police said the arresting officers were assaulted with rocks and bottles by the crowd, but protesters dispute this. Officers used pepper spray to disperse the crowd.

What is the reaction?

Congresswoman Alexandria Ocasio-Cortez, who represents the Bronx borough of New York City, tweeted: “Our civil liberties are on brink. This is not a drill.”

“There is no excuse for snatching women off the street and throwing them into unmarked vans.”

“There must be an immediate explanation for this anonymous use of force,” tweeted fellow New York City Congressman Jerrold Nadler.

The speaker of the New York City council called the video “incredibly disturbing” while the city’s comptroller said he was ‘deeply concerned”.

The arrest comes as federal police in Portland, Oregon, have been criticised for operations that involved officers dressed in military-style gear grabbing protesters off the street and placing them in unmarked vehicles.

President Donald Trump has vowed to deploy more federal police to cities that he says are facing unacceptable levels of unrest in wake of the 25 May death of George Floyd in police custody.

What happens to arrested protesters?

Any person arrested in the US is read “Miranda rights” by police, which inform them of their rights under the US constitution to refuse to answer police questions and the right to consult with a lawyer. However, some states do require people to identify themselves when asked by police.

If a suspect speaks to police during the arrest, a judge could later rule that they have waived their Miranda rights, according to the National Lawyers Guild.

Lying to investigators is a crime, and anything a suspect says during the arrest could be held against them later. Physically resisting can lead to additional charges, including resisting arrest or assault.

Depending on the severity of the alleged offence, a judge may issue a summons to return to court at a later date or hold the suspect in jail pending trial.

The NYPD Warrant Squad, who were involved in Ms Stone’s arrest, typically use unmarked vehicles and plainclothes officers in order to catch suspects off guard, according to police.

Broadly, US police do not have a requirement to provide identification, according to the Lawfare Blog.

Some cities or police department require police to display name tags or badges, or identify themselves as law enforcement during an arrest, but no requirement exists at the federal level.