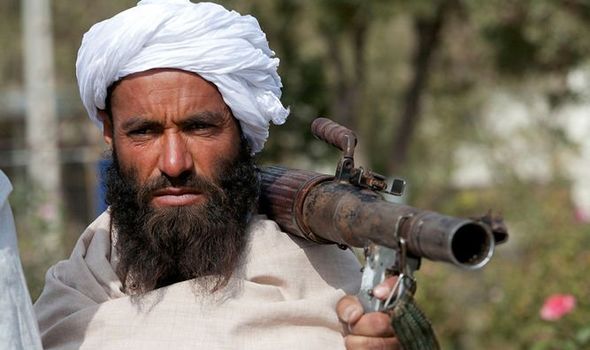 Sir Laurie Bristow, who is personally trying to speed the processing of UK citizens and Afghan allies at Kabul’s airport, said we must move fast while the militants still allow Britons to leave. Armed Forces chief General Sir Nick Carter described the coming hours as “pretty critical” and said our troops were aiming to remove 1,000 people every day.

The UK wants to help 6,000-7,000 British nationals and eligible Afghan staff to leave – but individuals must make their own way through Taliban checkpoints to Hamid Karzai International Airport and RAF flights.

That task became fraught with danger yesterday, as violence erupted on the city’s streets.

Sir Laurie, 57, said: “It is my choice to stay here. All of my staff here are volunteers. We are working very, very closely with our military colleagues and with others across Government to get through the workload and to get the people we need to get out of here to safety.

“We are working on the basis of days, not weeks. So we really do have to get those numbers through.”

Sir Laurie said it was “interesting” the Taliban was not impeding the UK evacuation. He said: “My assessment is they see it as in their interests to help it to happen.

“Obviously it’s in our interests for them to see it that way. So we’re working with them where we need to at a tactical, practical level.”

But it emerged last night that dozens of flights were taking off near-empty after the Taliban formed a ring of steel around the airport.

US cargo planes are taking off with an average of just 100 passengers from Kabul, despite being able to carry more than 600.

Flights bound for Germany, Australia, the Netherlands, France and Italy have been taking off with just a few dozen.

The first Dutch evacuation flight reportedly left Kabul without a single national on board after passengers were blocked by US troops.

And a German plane left with just seven people on board. Meanwhile, Taliban atrocities intensified, despite the group claiming a “huge difference” between them and the militants of 20 years ago.

The Taliban, just three feet away from the British soldiers, fired on crowds as they tried to reach the airport Tarmac.

An Army officer said: “It was terrible. Women were throwing their babies over the razor wire, asking the soldiers to take them. Some got caught in the wire.

“I’m worried for my men, I’m counselling some. Everyone cried last night.”

Fatima, a Kabul resident who reached British troops, only to be turned away, said: “Afghanistan is Taliban. Taliban is terrorist.”

Heartbreaking images showed young girls crushed against a gate begging American troops to let them through.

And British soldiers were forced to turn Afghan families away if they did make it past the Taliban checkpoints. The Taliban used whips, sticks, ropes and rifles to beat women and children trying to flee.

At least a dozen were carried away covered in blood.

A Kabul resident told the Daily Express the checkpoints are so scary “even criminals don’t have courage to take a wrong step”.

In a chilling return to brutal punishment, fanatics covered a suspected car thief in tar and paraded him through the city’s streets tied to a pick-up truck.

The group’s so-called “Angels of Salvation” are going door to door, dragging political opponents from their homes at gunpoint.

One suspect’s neighbour reported the Taliban said he would be hanged the next day.

Afghanistan is Taliban. Taliban is terrorist

German expats say they have become trapped in the chaos.

Those that made it to the terminal walls were whipped and beaten as they tried to slip through holes in the fence.

Prisoners have been executed in the western province of Herat as have civil servants in the south’s Kandahar province.

Militants in Jalalabad opened fire and beat people with batons after protesters replaced a Taliban flag with the Afghan emblem yesterday – the day before the nation’s independence day.

Mazari fought against the Taliban in the 1990s and was later killed by the group in 1996.

His statue stood where the Taliban infamously blew up two giant Buddha statues carved into the mountain 1,500 years ago. In an image shared by Afghanistan’s envoy to Poland, Tahir Qadry, a young woman lies in a pool of blood after being shot dead in Takhar province for allegedly refusing to wear a burqa.

A 21-year-old woman who was a teacher in Kandahar before it fell said she was now living “like a prisoner” in Kabul.

The Taliban claims it will not seek revenge on those who have fought against the group and is committed to the rights of women within the framework of Sharia law.

A senior leader said the role of women, including their right to work and education and how they should dress, would ultimately be decided by a council of Islamic scholars.

Yesterday the militant group appealed to former pilots and soldiers from the Afghan armed forces to join its ranks.