North Korea fired two cruise missiles from its west coast early on Wednesday, a South Korean military source reports. It comes after Pyongyang’s state media reported on Monday that Putin intends for the two countries to “expand the comprehensive and constructive bilateral relations with common efforts”.

In a letter to Kim for North Korea’s National Liberation Day, Putin said closer ties would be in both countries’ interests and would bolster security and stability on the Korean peninsula and the Northeastern Asian region, North Korea’s KCNA news agency said.

Kim also sent a letter to Putin saying Russian-North Korean friendship had been forged in World War II with victory over Japan, which had occupied Korea.

The “strategic and tactical cooperation, support and solidarity” between the two countries has since reached a new level in their common efforts to frustrate threats and provocations from hostile military forces, Kim said in the letter.

KCNA did not identify the hostile forces, but it has typically used that term to refer to the United States and its allies. 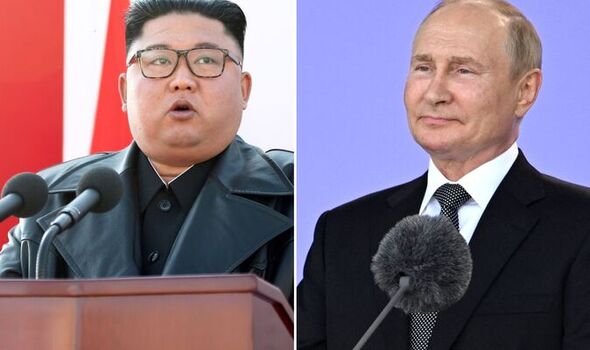 After the firing of the North Korean missiles today, Seoul announced it is working with the US military authorities to analyse details of the missiles’ flight, including the range.

The launches come a day after Seoul and Washington kicked four days of preliminary joint drills in preparation for a live field training.

Commenting on the strengthening of bonds between Russia and North Korea, rightwing-leaning author Douglas Murray wrote in The Sun that “Vladimir Putin is looking for friends wherever he can find them.”

He linked a partnership between Russia and North Korea to Putin’s ties to China, Iran, and Afghanistan and said that “the emergence of an axis of undoubted evil” can be seen, referring to George Bush’s phrase spoken in 2002 to justify the US’s War on Terror campaign.

Comparing North Korea to Afghanistan, the political commentator argued the Taliban regime is “aware of its pariah status” since the “disastrous American withdrawal from Kabul” and its emergence to power.

He then continued to dismantle Putin’s ties to China, which he called “the biggest outsider alliance of all”.

The conservative author added: “Now the Chinese are using a visit of American officials to Taiwan as an excuse to cosy up further to Russia.

“Before the Ukraine war, Russia and China announced a partnership ‘without limits’. It seems that they are now testing that.

“The Chinese recently condemned America for starting the war in Ukraine. As though it was American, and not Russian tanks, that rolled into the country. And they blamed the ongoing war on America.

“For helping to arm Ukraine. It is a view that could have been dictated by Moscow — and probably was. The Russians returned the compliment.

“After the recent US visit to Taiwan, Moscow condemned America for daring to allow its officials to visit. The Russians said that Taiwan is an ‘inalienable’ part of China.”