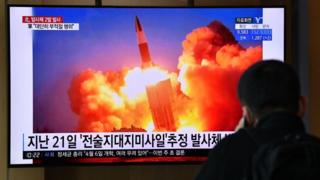 North Korea hailed a test of “super large” rocket launchers, just hours after the South condemned the state as “inappropriate” for pursing tests amid the global coronavirus outbreak

On Sunday, South Korea said two short-range missiles had been fired, the latest in a flurry of tests this month.

The North generally ramps up missile tests in the spring and the global virus outbreak has not deterred it.

It has reported no virus cases, but experts have cast doubt on this.

Sunday’s test was of two short-range ballistic missiles fired from the eastern city of Wonsan. They flew for 410km (255 miles) with a maximum altitude of around 50km before falling into the sea, the South Korean military said.

By then the South had already condemned the North’s actions In a harshly-worded statement,

“In a situation where the entire world is experiencing difficulties due to Covid-19, this kind of military act by North Korea is very inappropriate and we call for an immediate halt,” said South Korea’s Joint Chiefs of Staff.

No signs of stopping

This is the most missiles ever fired in a single month by North Korea, according to a senior researcher at the James Martin Centre for Nonproliferation Studies.

“The only time we’ve seen tests this frequently were in 2016 and 2017,” said Shea Cotton, who also posted details of missile tests that have taken place over the years.

This March is now tied for the most DPRK missiles launched in a month (alongside August 2019). Coming this early in the year, the only time we've seen tests this frequently were in 2016 and 2017, both of which were huge years for North Korea's missile program. pic.twitter.com/USEZwBSDIK

Mr Cotton also told the BBC that it was likely that North Korea would continue testing.

“Most recently they’ve hinted that they’ve developed other yet unseen missiles. I also think they might do tests of new missiles or might test their existing ones in different ways.”

North Korea had earlier announced it would be holding a session of the Supreme People’s Assembly, the country’s parliament, on 10 April. Analysts say the meeting will involve almost 700 of the country’s leaders in one spot.

North Korea borders China, where the virus emerged, and South Korea, where there has been a major outbreak. A top US military official said last week he was “fairly certain” there were infections in North Korea.

It quarantined around 380 foreigners – mostly diplomats and staff in Pyongyang – in their compounds for at least 30 days.

The restrictions were lifted at the beginning of March. Around 80 foreigners, mainly diplomats, were flown out of the capital on 9 March.