Tensions are growing in Myanmar as the military junta crack down on the ongoing anti-coup protests across the country.

The military is increasingly attempting to limit internet access to stop protesters from organising and spreading information, plunging Myanmar into a near-total internet shutdown for the past three nights, according to one agency monitoring internet shutdowns across the globe.

Human Rights Watch believes that the increase is connected to what they see as intimidatory tactics being deployed by the military and police against protesters. 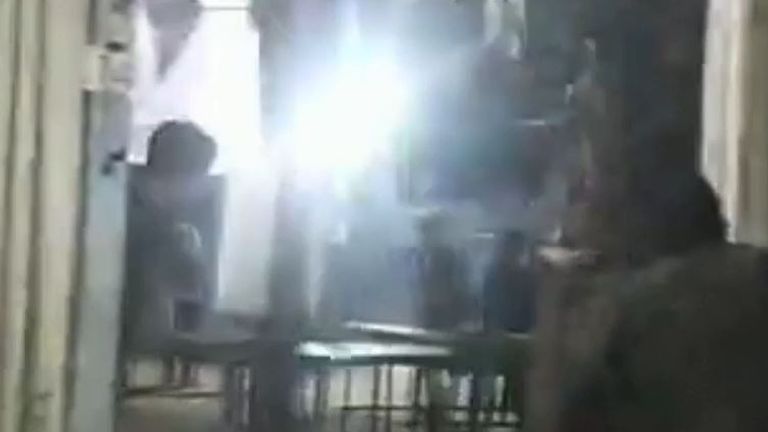 Despite this, demonstrations continue to take place in towns and cities and there is evidence to suggest that posts about the protests are reaching new platforms and bigger audiences.

Sky News analysis of tweets using the word “Myanmar” between 14 February and 16 February found that almost half of all the 80,000 accounts that shared those messages were created after the military seized power at the beginning of February.

But how has internet access been limited since the coup and why have nationwide shutdowns increased since the weekend?

How the internet has been restricted since February

Data collected by Netblocks Internet Observatory show that internet connectivity in Myanmar has been intermittently restricted since the military seized power.

From Sunday to Tuesday, the internet was operating at around 15% of ordinary levels across Myanmar from 1am to 9am.

Nation-wide shutdowns of this kind have been imposed five times since the coup began, with three of those in effect in recent days. Social media platforms Facebook, Instagram, Messenger, WhatsApp and Twitter have all been blocked on at least some, if not all, of the main internet providers in Myanmar as protests against the coup intensified over the weeks.

It’s thought that the military is attempting to quell the protests by limiting protesters’ ability to communicate with one another on these platforms as well as stopping information reaching the outside world.

Some have found ways to circumvent the restrictions by using virtual private networks (VPNs), which encrypt the user’s connection so their location cannot be identified.

Others have used international sim cards to sidestep the restrictions. “This is a new thing for the military. They have not really dealt with the internet in the way that they’re facing now with these protesters and with young people really knowing how to use it and knowing how to evade blocks such as the blocks on Facebook, Twitter, Instagram and WhatsApp,” Phil Robertson, deputy Asia director at Human Rights Watch told Sky News.

“How quickly those [blocks] were evaded with the use of VPNs – this was something the military didn’t quite understand. So over the past two nights, they’ve literally just flipped the switch on the internet from 1am to 9am and it dropped off to almost nothing.”

But why are shutdowns on this scale happening more often?

The military has not said why the internet was so heavily limited over these three nights, but Human Rights Watch believe it is connected to intimidation tactics which they say are being deployed by the military and police.

“There’s an 8pm to 4am curfew and [the military and police] are engaged in a lot of night-time raids to locate and arrest people who are protest leaders or people who are seen as important activists who are really generating the connections and enthusiasm for the continued protests,” said Mr Robertson. 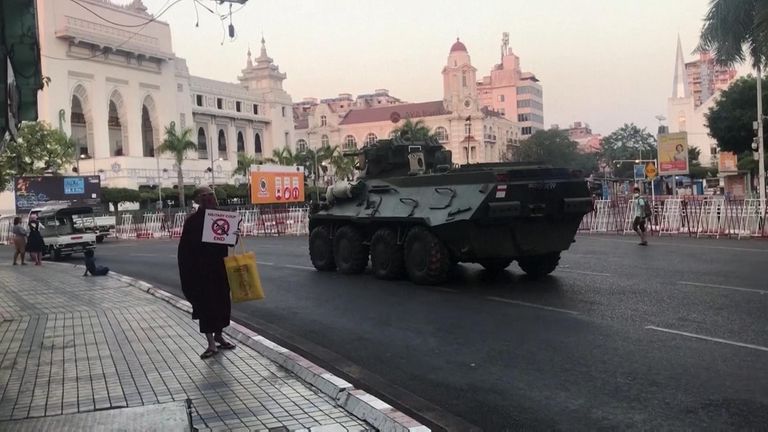 “Part of the reason for shutting off the internet from 1am to 9am is to allow the police to operate without having their photos or their video immediately put up on the internet, which is what was happening previously.”

Sky News South East Asia correspondent Siobhan Robbins said: “The shutdown could be a cover behind which something more far sinister is happening, it could be a psychological scare tactic to tire out the opposition who are living in a constant state of high alert or it could simply be a means of the military flexing its muscles to show the people that it can control their communication lifeline if it wants to.

“The point is no one knows for sure – that uncertainty alone is a weapon and that’s why fear is growing.”

How protesters are evading restrictions

Despite these overnight shutdowns, anti-coup activists are still managing to share pictures, videos and posts about the protests. Sky News analysis indicates that some are finding new ways to share their message online, with thousands moving on to Twitter.

We analysed all 215,000 tweets that mention “Myanmar” from 14 February to 16 February and found that around half of the 80,000 accounts tweeting were created after the military seized power.

Most of these tweets were in support of the protests, indicating that supporters are moving to other platforms to reach wider audiences.

“There’s been a huge, massive surge on to Twitter,” said Mr Robertson.

Mr Robertson believes that Twitter’s newfound popularity among anti-coup protesters could be down to the presence of global leaders, international news channels and organisations like the UN on the platform.

Facebook remains one of the most popular ways to share information online in Myanmar, including by government officials. But Twitter offers potential for anonymity that could be attractive to protesters in Myanmar.

“We’ve seen it similarly in Thailand, there were a lot of Twitter accounts created so that people could speak out and say things without being immediately identifiable and couldn’t be immediately retaliated against because they weren’t using their real names or real photos.”

This comes as the military junta is attempting to push through a cyber security bill which would grant authorities access to user data and greater controls over the internet.

The legislation would require online service providers to block or remove content that falls outside of the authorities’ guidelines, which Human Rights Watch say would effectively “allow the military authorities to order the removal of any content it does not like”.