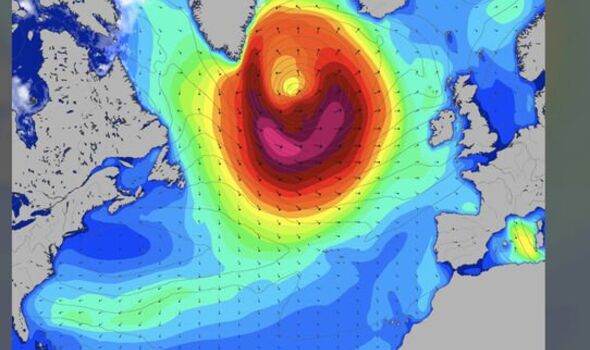 A monster storm brewing in the Atlantic threatens a Bonfire Night deluge sparking warnings to ‘have waterproofs ready’.

A huge low-pressure system churning the north Atlantic is heading eastwards on a collision course with Britain.

After a wet and windy start to November, the weather will take a turn for the worse mid-week with torrential downpours and gales forecast.

A brief respite on Friday will give way to a ‘bonfire night soaking’ as revellers brace for thunder and strong winds.

Jim Dale, meteorologist for British Weather Services, said: “We are in the middle of quite an unsettled spell of weather at the moment.

“The jet stream is coming down further southwards and this is helping to push low-pressure systems towards the UK.

“There will be a lot of rain around on Saturday morning and some soggy bonfires.”

Rain will die down through the day before the next deluge arrives in the evening, he warned.

As the churning vortex ploughs in from the Atlantic, western regions will bear the brunt of the assault, he added.

He said: “It is looking like a pretty clear nationwide split in the evening with the northwest looking ugliest as this low moves closer.

“It is a timing issue at the moment as to how it develops and how far in it comes, but there is the likelihood of heavy downpours and gusty winds.

“With the unstable atmosphere, there will also be a risk of thunderstorms through the weekend.

“So, all in all, the weather is going to soak a few bonfires this weekend.”

Wet and windy weather will set in during mid-week as the weather comes under the influence of a turbulent jet stream.

The Met Office has issued warnings for wind across western and northern Britain on Wednesday with another rain alert in force in Scotland.

Met Office meteorologist Alex Deakin said: “A set of weather fronts is tied into an area of low pressure, and as this moves in, the isobars squeeze together, and that’s where we will see some of the strongest winds initially for Northern Ireland, but then moving across Wales and over much of northern England with gusts of 55mph and maybe as high as 65mph.

“There is the potential for some disruption with ferries affected by gusty winds across Irish Sea coasts, but also the wind could potentially bring some branches down, and that heavy rain after recent downpours could cause some flooding.”

Friday will be calmer before Britain is thrust back into the washing machine at the weekend, according to Met Office meteorologist Aidan McGivern.

He said: “Friday’s drier and brighter interlude does not last long because the next low is gearing up out towards the west, picked up by a lively jet stream and deepened over the open waters of the Atlantic.

“Saturday will be a dry start for some, but it will soon turn wet and windy.

“The weather is staying very autumnal, there won’t be many leaves left on the trees by the end of this week.”

Weathertrending’s John Hammond added: “As cooler air feeds in and winds die down a bit there is the possibility of some overnight frosts in some rural spots but generally the theme is very unsettled and as we end the week and into the weekend.

“If you have fireworks planned, good luck with those, have waterproofs at the ready because it looks pretty unsettled and at times pretty wet and windy through the weekend.”