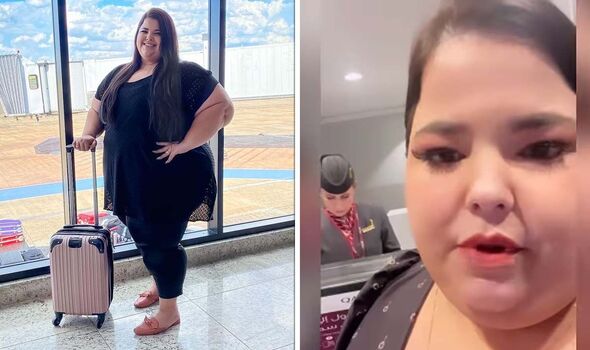 A plus-sized model will receive thousands of pounds worth of therapy, paid for by Qatar airways, after she claimed staff denied her flight because they thought she was a “fat monster”. Juliana Nehme, 38, from Brazil, was set to fly from Beiruit, Lebanon to Doha but was denied from boarding unless she bought a first class ticket, she said. The woman ended up staying with her mother in Lebanon where she had been enjoying a holiday.

In San Paolo Brazil, a court judge ordered the company to pay for Ms Nehme to have psychotherapy to help her deal with the stress of the ordeal.

They declared her treatment has to include “a weekly therapy session worth $78 for a period of at least one year, totaling $3718 to be deposited in the plaintiff’s bank account”.

In an instagram video post to her 167,000 followers at the time, she said: “They are denying my right to travel … I’m desperate, help me, they don’t want me to board because I’m fat.

“What a shame for a company like Qatar to allow this type of discrimination against people! I’m fat, but I’m just like everyone else!”

San Paolo’s Judge Carvalho said the therapy would help with “granting of urgent relief is a reasonable and proportionate measure to ensure that the stressful and traumatic event is overcome”.

Back in Brazil, Ms Nehme told the media: “It was like I wasn’t a human being to them. I was a fat monster that couldn’t get on board. It was horrible. I’d never imagined going through something like this, ever.

“It hurts me now to remember how much I blamed myself because I blamed myself a lot, I even asked my mother for forgiveness several times. I said, ‘Mum, forgive me because me being like this stopped you from going home.’ And she said it wasn’t my fault.”

Qatar airways responded to the claim in a press statement, suggesting they treat all passengers with “respect and dignity”.

The airline’s defence included a claim that the Nehme was “extremely rude” and “aggressive” to check-in staff.

It wrote in the statement: “Qatar Airways treats all passengers with respect and dignity and in line with industry practices and similar to most airlines, anyone who impedes upon the space of a fellow traveler and cannot secure their seatbelt or lower their armrests may be required to purchase an additional seat both as a safety precaution and for the comfort and safety of all passengers.

“The passenger in question at Beirut Airport was initially extremely rude and aggressive to check-in staff when one of her traveling party did not produce required PCR documentation for entry to Brazil.”

It added: “As a result, airport security was requested to intervene as staff and passengers were extremely concerned with her behavior.”

The model first traveled Brazil to Lebanon with ease.

But when she tried to get her first indirect flight to Doha, from where she would get a flight back to San Paolo, staff of Qatar airlines reportedly told her she needed the first class ticket, costing over $3,000 to allow for her size.

She said on her Instagram she asked for a refund for the original flight but was refused.

While Nehme was waiting in Lebanon for the situation to resolve, the Brazilian ambassador reportedly called Qatar airways who then arranged to fly the model back three days later without further payment.

In a video from Beirut-Rafic Hariri International Airport, she told followers: “I was threatened.

“Trying to record what they were doing, the counter lady pushed me and nothing worked. I’d be f***** if I didn’t stop recording.

“They wanted my mom out and leave me alone here in Lebanon. But I don’t speak English or Arabic. She said no to it

“My sister and my nephew went to Brazil

“I’m spending money on hotel and taxi that I didn’t need! Can’t afford to hang around any longer.”