In total, the Met Office has issued five severe weather warnings for the next three days.

Met Office Chief Meteorologist Frank Saunders said: “This week has been fairly unsettled and we’ll see this typical autumnal weather continuing over the weekend, with heavy rain and strong winds expected to bring disruption and risk of flooding to some areas.

“Although Friday will be bright for most, heavy and persistent rain will arrive across western areas later this evening as Storm Aiden arrives in the UK.

“Several yellow rain and warnings are in place from Saturday until Monday, covering western parts of the UK.” 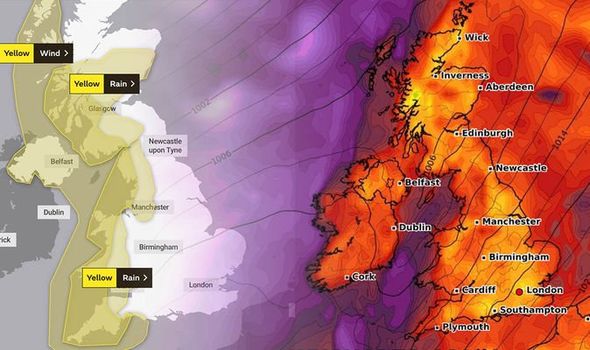 The Met Office has updated a severe weather warning for rain on Saturday.

The update was issued to extend the area covered by the warning to include new parts of northeast Scotland.

The warning reads: “Persistent and heavy rain is expected to spread northeast across Scotland on Saturday morning, with 0.8 to 1.6 inches (20mm to 40mm) rain falling quite widely across southern, western and central Scotland and into the northeast, with perhaps more than 2.4 inches (60mm) over hills and mountains.

“Given the time of year, strong winds will lead to enhanced leaf fall, which may result in additional surface water flooding due to the blocking of drainage channels.” 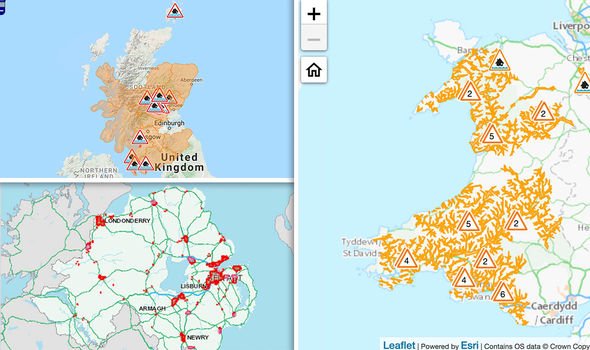 The rain warning is in effect from 3am to 7pm on Saturday and warns of heavy rainfall which is expected to impact parts of Scotland leading to a chance of travel disruption and flooding.

The following regions will be impacted by the warning:

DON’T MISS
Met Office warning: Lives at risk amid up to 6 INCHES of rain [FORECAST]
BBC Weather: Europe braces for ‘clusters of thunderstorms and showers’ [MAPS]
‘Barrage’ of Atlantic storms to strike with hail and thunder [INSIGHT]

The start and end times of the warning were changed and delayed based on new forecasts.

The area covered by the warning has also been extended eastwards, affecting parts of northern England.

The Met Office warning reads: “Outbreaks of rain will spread across the UK during Sunday with prolonged spells of heavy rain developing during the afternoon in many western areas.

“Following heavy rain in these areas during previous days, flooding impacts and disruption to transport is possible.

“Strong to gale force southwesterly winds are likely with potential for leaf fall to exacerbate flooding in places.” 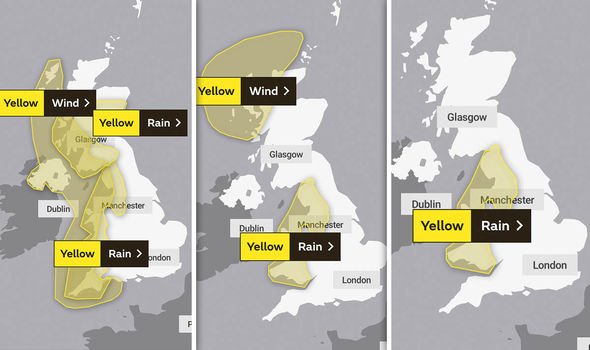 The rain warning is in effect from 12pm on Sunday to 8am on Monday in the following regions and authorities including:

The Met Office has also issued two wind warnings for the weekend.

The first is in effect on Saturday from 6am to 9pm covering western parts of the country.

The warning reads:”A belt of very strong and possibly squally southerly winds will develop on Saturday morning with gusts of 60mph to 65mph, perhaps 70mph on exposed coasts and hills.

“The winds will become more westerly during the afternoon and gradually ease across England and Wales.

“However, they will remain very strong across Scotland and Northern Ireland into the evening, with possible gusts around 75mph across the Western Isles.”

The second wind warning is in effect from 12pm to 9pm on Sunday after northwestern parts of Sunday.