UAE and Saudi media outlets focus their reporting on losing side, Japan, with some not even mentioning the word Qatar. 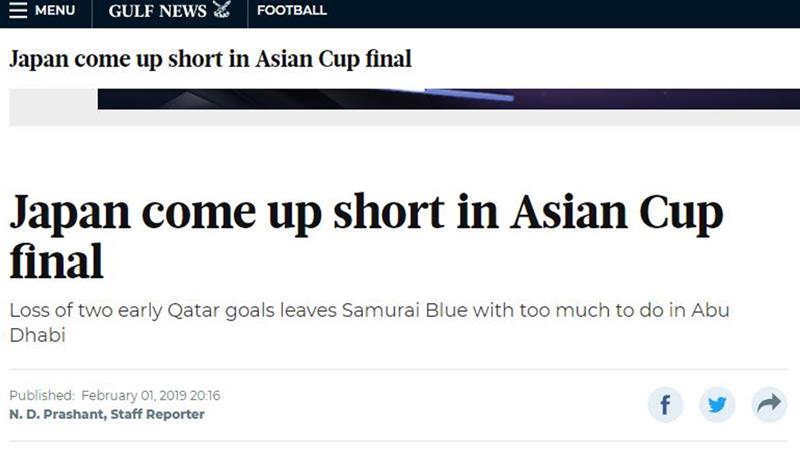 Following Qatar’s win of the Asian Cup on Friday, media outlets in the United Arab Emirates and Saudi Arabia struggled with recognising the Gulf country’s victory.

Several Twitter users criticised UAE and Saudi news media for solely focusing on the losing side in the final, Japan, with some not even mentioning the word “Qatar”.

Several outlets had already stopped reporting about the tournament altogether following Qatar’s 4-0 win over the UAE, the tournament’s host, in the semifinals on Tuesday.

The UAE, Saudi Arabia, Bahrain and Egypt imposed a land, sea and air blockade on Qatar in 2017, accusing Doha of supporting terrorism and fostering closer ties with Iran. Qatar denies all the charges.

Qatari football fans were barred from attending the tournament in the UAE because of the bitter political rift and their national team was forced to play almost entirely without support from the stands.

Lordie lord, that is PATHETIC yet funny pic.twitter.com/DN4mSW564T

On Saturday, Gulf News, one of the major newspapers in the Emirates, focused its reporting mostly on Japan being the losing side, with a headline reading “Japan come up short in Asian Cup final”.

The Khaleej Times had a story headlined “Unlucky Japan lose AFC Asian Cup final”, saying that “Japan fought until the last second, and like a champion side, dug deep to grab a positive result but couldn’t succeed”.

“It was a sad end to the biggest Asian Cup tournament for Japan as Qatar won the title,” the article concluded.

The difference with last year’s FIFA World Cup was striking, when headlines in both Gulf News and the Khaleej Times celebrated the winner, France, instead of highlighting who lost the final.

The last news article about the Asian Cup on the Emirates 247 website was about Japan’s semifinal match against Iran, held last Monday and the lead up to Qatar’s 4-0 win semifinal over the UAE. That match and Qatar’s win 3-1 in the final were not reported on by the site.

The website did, however, report on the Dubai Police concluding the Dubai Football Challenge.

Meanwhile, UAE’s Arabic media outlets also focused most of their attention on the losing side.

Back to the absurdity we call #UAE ?? so-called journalism @AlBayanNews’ front page had NO mention of the #AsiaCup, just didn’t happen folks

Sports section reported “#Japan ?? couldn’t hold on to the title”

Both Al Bayan and Al Etihad had more interest in Japan’s side and the fact that it won the Fair Play award than Qatar’s win over the four-time champion, with Al Bayan not even mentioning the word “Qatar”.

The Saudi newspaper Saudi Gazette reported only on a dismissed complaint by the UAE Football Association after the Qatar vs UAE semifinal.

Meanwhile, former Dubai police chief Dhahi Khalfan took to Twitter, calling the Qatari side “a litter of stray dogs”, adding that Israel was somehow involved in Qatar’s victory after an Israeli army spokesperson congratulated Qatar on its victory.

“A blessing from their master,” Khalfan said in his tweet.

The responses come after Qatar beat Japan on Friday with 3-1 in the final of the 2019 Asian Cup, hosted by the UAE.

It was the first time Qatar, which only conceded one goal in the whole tournament, made it to the final.

Following the win, people in Qatar took to the streets to celebrate the victory of their national team.