Martin Ennals Award given to Abdul Aziz Muhamat, who has been advocating for refugee rights on Papua New Guinea island. 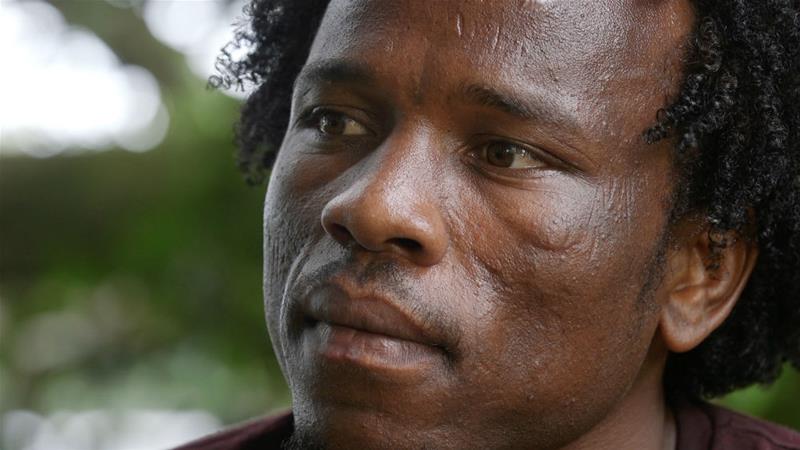 The 25-year-old, who has been tirelessly advocating for refugee rights during his five-year detention, was named the winner of the 2019 Martin Ennals Award in the Swiss city of Geneva during a ceremony held on Wednesday night.

Muhamat, who fled the war in Darfur in western Sudan, was sent to PNG’s Manus Island by authorities after the boat he was travelling on to reach Australian shores was intercepted in 2013 as part of Canberra’s strict and much-criticised offshore immigration processing policy.

More than five years later, Muhamat is still languishing on the remote island where he’s working around-the-clock to help some 500 other refugees and asylum seekers – from providing impromptu counselling and talking friends and counterparts out of self-harm and suicide, to teaching them English and liaising with journalists and lawyers.

Their detention and living conditions have been denounced as “inhumane” and “systemic torture” by the United Nations and human rights organisations.

“This award sheds light on the very cruel refugee policy of the Australian government,” Muhamat said in an acceptance statement.

“It also brings international attention to the dangers and ill-treatment faced by refugees all over the world, including in countries that claim they uphold the Refugee Convention.”

Following a PNG court ruling that declared it it illegal, the Manus Island centre was officially shut down by Australia in late 2017 – its last remaining men violently ejected and moved on to “transition centres” – after a large cohort spent several weeks resisting the power, water, food and medicine cuts, gaining a sizeable amount of media coverage.

Muhamat was at the forefront of the refusal to leave the centre.

“I never felt that I’m free in five-and-a-half years, except those 24 days,” he told Al Jazeera last year. “I felt that people are calling my name, ‘Aziz’, instead of Q and K and zero, zero two.”

Having been moved from the prison-like detention centre, the refugees are now in poorly serviced camps which they are free to leave. Most, however, stay put,

For Muhamat, the day-to-day ritual of helping others over the years –  has been part and parcel of survival.

Muhamat was granted a temporary Swiss visa to travel to Geneva to accept the annual award, which is named after a Nobel Peace Prize-winning British activist and been given out to human rights defenders since 1994. He is set to return back to Manus next week.

Since arriving on the island, Muhamat “never stopped raising his voice for those who have been stripped of their most basic rights together with him”, said Dick Oosting, Chair of the Martin Ennals Foundation.

“He showed extraordinary tenacity and courage, always resisting peacefully even after a police officer shot him in the leg.”

“The Australian government must meet its international obligations and put an end to these inhumane practices,” Oosting said.

The UN refugee agency (UNHCR) in a statement lauded Muhamat’s advocacy work, urging “that solutions be found for all refugees and asylum-seekers under Australia’s offshore processing in Papua New Guinea and Nauru as a matter of urgency.”

Muhamat’s honour comes just weeks after another Manus detainee, Iranian-Kurdish author Behrouz Boochani, was awarded one of Australia’s most prestigious literary prizes for a book he wrote.

On Wednesday, Australian Prime Minister Scott Morrison announced the reopening of an immigration detention camp on Christmas Island in the Indian Ocean after his government lost a parliamentary vote on the issue of medical evacuations for refugees in offshore immigration detention.