Met Office warnigns for issued across a stretch of the UK today as the weather agency warned “bands of thunderstorms will likely bring some disruption”. The yellow thunderstorm warning is in effect across a huge proportion of England, from parts of Devon and Cronwall stretching up to the East Midlands and beyond. And with thunder, there’s always lightning – and weather maps show exactly where the lightning is hitting the UK in realtime.

Storms and rain are forecast for much of the UK throughout the afternoon and into tonight.

Havy showers will persist through the day and will turn thundery in places.

Showers will gradually fade to leave it largely dry overnight with clear spells, but there will still be a few showers for the north and west of the country.

Moving into Sunday, there will be even more wet and windy weather in store. 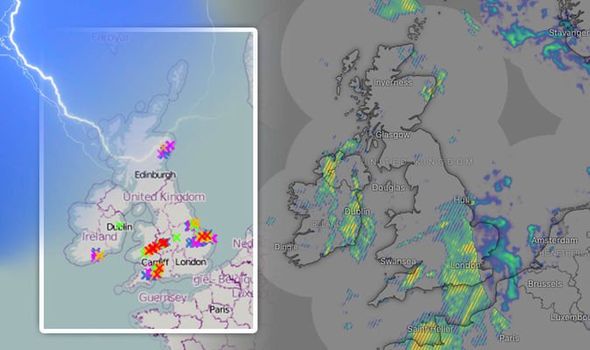 UPDATED 5.30pm BST: Lightning is currently striking in a band of storm from Exeter up to Wells, with a msathering reports beyond up to Bristol.

The NEtWeather maps show dozens of lightning reports are also coming in from between Peterborough and Norwich.

While a further smattering of storm action has been seen just south of Hull.

Wales is also getting in on the lightning action, with a band of strikes reported between Lampeter and Llanwrtyd Wells, stretching acrodd the Wales-England border to Clun, Hereford and towards Birmingham. 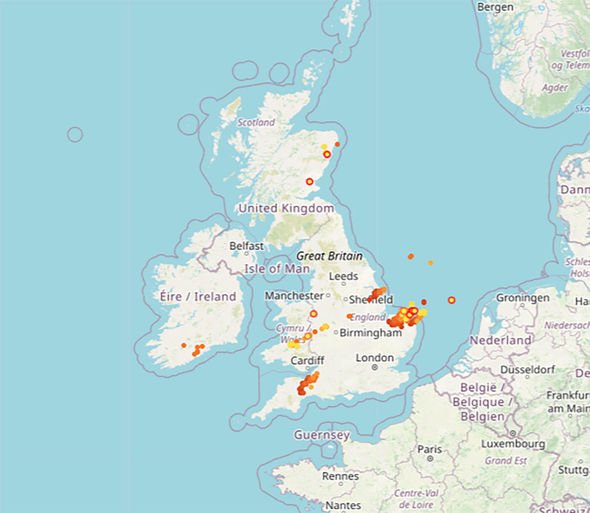 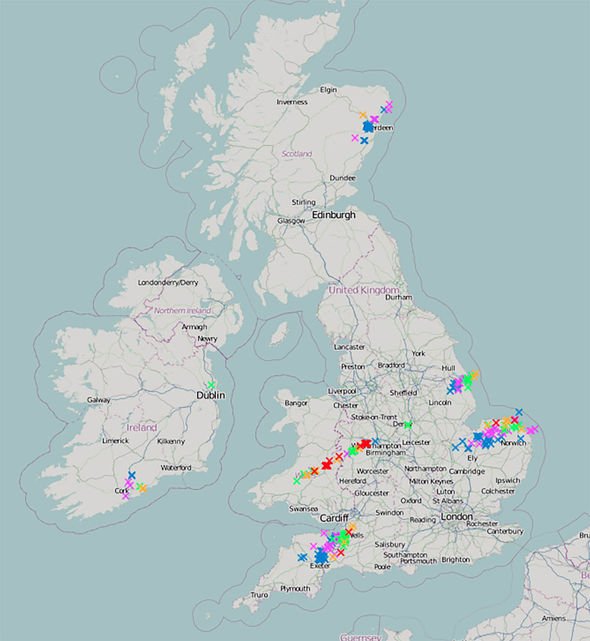 BBC Weather forecaster Sarah Keith-Lucas warned that with the thunder and lightning today, there will also be plenty of rain.

She said: “Coming out of that cloud some very torrential downpours at times later this afternoon.

“There could be some thunderstorms around as well but not everywhere is going to see the rain, they’re fairly hit and miss.

“This big area of low pressure is driving our weather so weather fronts are going to be pushing their way west to east over the next 24 hours or so, bringing those outbreaks of rain and fairly blustery winds too.

“Many places waking up to a fairly damp start to the morning. Heaviest of the rain this morning across parts of Scotland. Further south we are going to be seeing those torrential showers into the afternoon.”

Southern England is expected to become the main target of the downpours but much of the country will be hit by the dreary weather this weekend.

But despite the damp conditions, temperatures are expected to be rather on the warm side, at about 18C to 21C.

“The warmest spot probably in the east, East Anglia has 23C or so,” she added.

Wet and windy conditions will continue through Sunday, with the breeze to take hold across northwest Scotland.