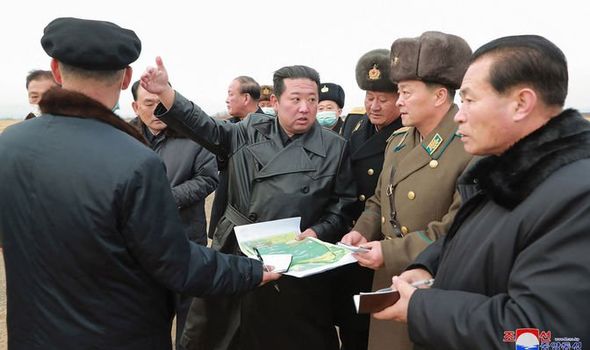 The supreme leader was shown struggling to walk in a new North Korean documentary broadcast on Tuesday. Kim Jong-un could be seen limping in the 110-minute film titled “The Great Year of Victory, 2021”, which chronicled a series of achievements throughout the year including on missile development, construction and efforts to beat the pandemic.

It comes as Kim tackles the impoverished country’s “worst-ever hardships” amid the coronavirus pandemic and sanctions over its weapons programmes.

At one point in the film, Kim was seen struggling to walk down makeshift stairs during a visit to a rainy construction site.

The narrator says: ”This video showed his motherly side where he completely dedicated his own body to realise people’s dreams.”

The film did not directly refer to Kim’s weight loss, but the 38-year-old has appeared increasingly thinner in recent state media photos.

It comes after state media said North Koreans were “heartbroken” to see an “emaciated” Kim in a rare such dispatch, after he reappeared following absence from the public eye for almost a month.

International media, intelligence agencies and experts closely watch Kim’s health due to his tight grip on power and the uncertainty over succession plans.

Previous reports suggested the North Korean dictator had transferred some of his power to his younger sister Kim Yo-jong over concerns of “stress”.

The narrator repeatedly lauded projects as signs of “victory” led by a noticeably thinner Kim.

The documentary also showed Kim watching the sunrise alone while riding a white horse on a beach.

On another ride, he was seen with military officials including Pak Jong Chon, chief of the General Staff of the Korean People’s Army, followed by a clip of tanks staging live-fire drills.

The film included rare images of a new 80-storey skyscraper and a large apartment district, as well as some clips and images of a defence expo in October and previous missile tests.

The film did not elaborate on the hardships but reclusive North Korea faces deepening food shortages amid the sanctions, drought and floods, according to UN agencies

The hermit state has not confirmed any COVID-19 cases, but has closed its borders.

But it has been steadily developing its weapons systems amid an impasse over talks aimed at dismantling its nuclear and ballistic missile arsenals in return for relief from UN and US sanctions.

In December, Kim said the ruling party had some success in implementing a five-year economic plan he unveiled early last year, but warned of a “very giant struggle” this year, citing the pandemic and economic difficulties.

It comes after Kim was pictured inspecting a munitions factory for the first time in years.

On Friday, North Korea confirmed it had test-fired an upgraded long-range cruise missile and a tactical guided missile this week.

The official Korean Central News Agency said it “conducted the test-firing for updating long-range cruise missile system and the test-fire for confirming the power of conventional warhead for surface-to-surface tactical guided missile” respectively on Tuesday and Thursday.