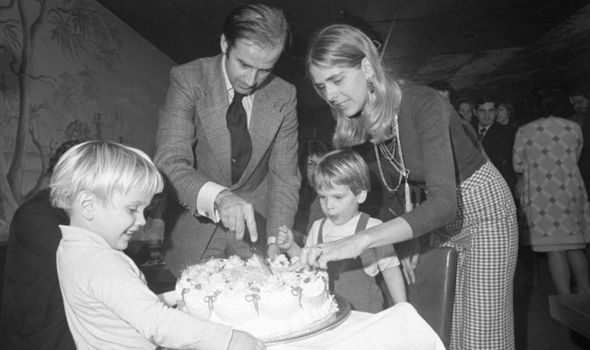 The truck hit the Chevrolet broadside, pushing the car 150ft into a line of trees, crushing the back seat and tearing off the left rear wheel. Minutes later, Joe Biden, newly elected to the US Senate, received the phone call that told him his wife Neilia, aged 30, and their 13-month-old baby Naomi, had been killed in the accident.

His sons in the back seat were badly injured: Joseph, known as Beau, aged three, suffered numerous broken bones, and two-year-old Robert, known as Hunter, had a fractured skull and head injuries that doctors feared might be permanent.

The tragedy in 1972 has indelibly shaped the man who is on the brink of becoming the 46th president of the United States.

The son of a car salesman, Joe had met Neilia on a beach in the Bahamas and, after a whirlwind romance, they married and had three children.

When his family was ripped apart, he was only days from beginning his first term as a senator. Those close to Biden say that terrible loss forged in him an empathy and a compassion that have come to define his authenticity in America’s cynical and self-serving political arena. 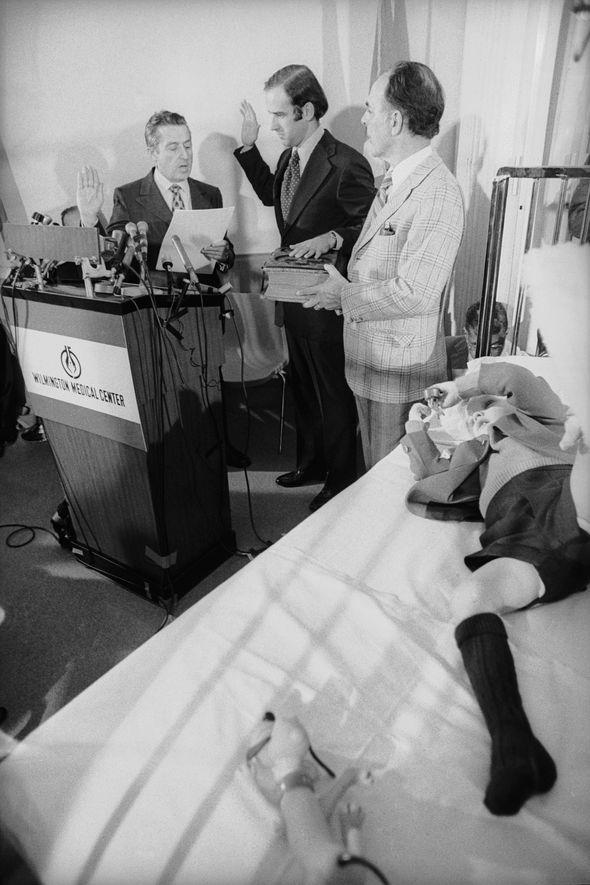 Biden, aged 77, rarely speaks about his suffering, reluctant to exploit his family tragedies – and he has endured several – for political gain. But he has on occasion admitted to the depths he plumbed after the car crash.

“I began to understand how despair led people to just cash in; how suicide wasn’t just an option but a rational option,” he confessed.

“But I’d look at Beau and Hunter asleep and wonder what new terrors their own dreams held, and wonder who would explain to my sons my being gone, too. And I knew I had no choice but to fight to stay alive.”

Days before taking up his Senate seat, Biden was ready to quit politics, but was persuaded to stay and give it a six-month trial. He was sworn in not in the Senate but in his sons’ hospital room. Working in Washington DC, he took the 90-minute train home to Delaware every night to be there for his boys.

Yet a year after the tragedy Biden felt his loss all the more.

“Neilia was my very best friend, my greatest ally, my sensuous lover,” he recalled. “The longer we lived together the more we enjoyed everything from sex to sports? When you lose something like that, you lose a part of yourself that you never get back again.”

Nearly 30 years after that terrible accident, Biden would confess: “Sometimes it just overwhelms me.”

Yet tragedy was to strike again in 2015 when Delaware state Attorney General and Army captain Beau Biden died after a two-year battle with brain cancer. “It happened,” Joe Biden wrote in his diary that night. “My God, my boy. My beautiful boy.”

Says Senator Coons: “The suffering he went through over losing Beau was just unspeakable. The depth of his grief over Beau’s passing was just beyond imagining.”

Yet at Beau’s funeral it was Joe Biden who spent several hours comforting his fellow mourners. “He was consoling more people than were consoling him,” said his lifelong friend Fred Sears. 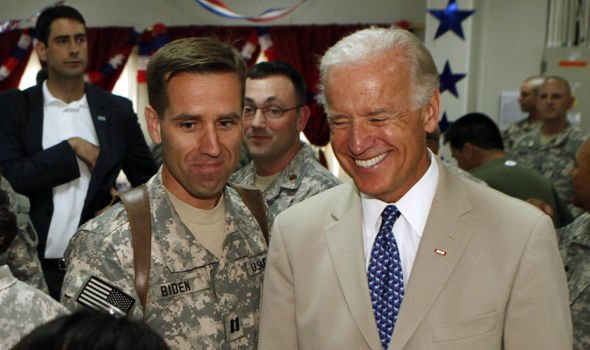 His grief over his son’s death went so deep it prevented Biden from running for president in 2016, the year Hillary Clinton lost to Donald Trump.

Biden confessed: “I wasn’t sure if I would be able to find the emotional energy.”

The following year he wrote of that loss in his book, Promise Me, Dad: “I miss him so terribly? Beau could always chase my fears away. He saved my life, along with Hunter, 40 years ago, after Neilia and Naomi died in the car accident.”

Biden’s working-class roots and Irish Catholic upbringing gave him resilience and a strong moral compass, along with the struggle to overcome a childhood stutter that persisted into his 20s, and which still emerges under stress, leading to sometimes painful pauses in this year’s presidential debates.

Joseph Robinette Biden Jr was born on November 20, 1942, in Scranton, Pennsylvania. His family struggled financially so they moved in with his hard-drinking maternal grandparents, before settling in Wilmington, Delaware. 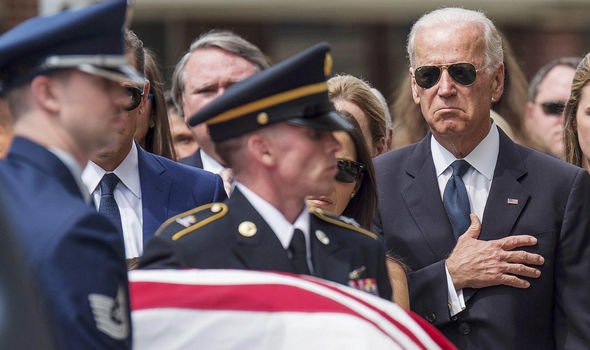 As Donald Trump has been quick to point out, Biden was no scholar: though elected school class president he was a poor student, and at the University of Delaware in Newark he ranked 506th in his class of 688, barely graduating with a degree in history and political science.

Biden married school teacher Neilia Hunter in 1966 and quickly had three children as he earned a law degree, escaping the draft for the Vietnam War because of his asthma.

He became a Delaware county councilman in 1969 and, three years later, made a giant political leap, when he was elected the second-youngest senator in US history, aged 29.

After losing his wife and daughter, Biden earned a reputation for reaching across the aisle to work with political opponents, finding common ground. He became best friends with Republican senator John McCain.

Yet Biden still longed for love, finding it on a blind date with English teacher Jill Jacobs. They wed in 1977, producing daughter Ashley four years later. 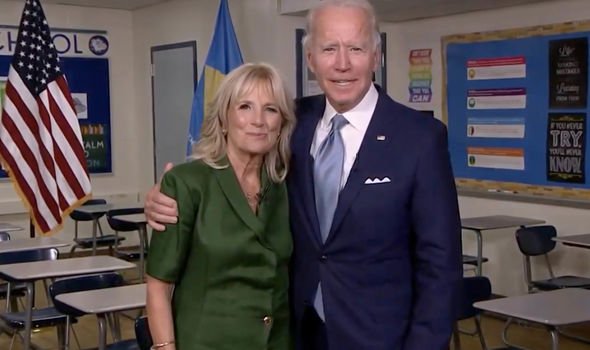 After a Senate career in which he was tough on crime but fought for gun control, Biden first ran for the presidency in 1988, but was forced to drop out after being exposed for plagiarising then.

He finally made it to the White House in 2008 when Barack Obama chose him as his vice president, and he served for eight years. But son Beau’s brain cancer cast a pall over his final years in office, and Biden also had to deal with son Hunter’s self-destructive lifestyle.

Hunter – married with three children – became embroiled in an affair with Beau’s widow, Hallie. Hunter’s wife sued for divorce, claiming he had blown a fortune on drugs, prostitutes and strip clubs.

President Trump ambushed Biden last month with dubious information from a computer laptop that once belonged to Hunter, which allegedly held video of him smoking crack cocaine from a pipe and indulging in sex acts with unidentified women. 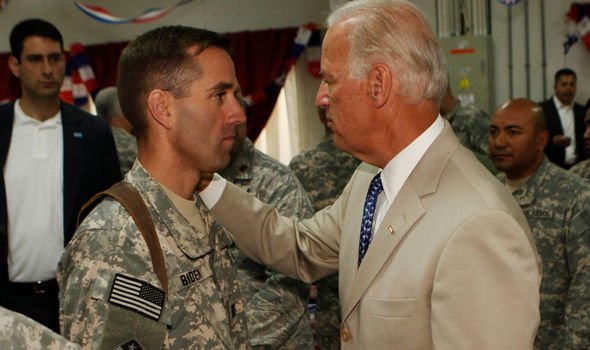 The FBI warned this data may have come from a Russian disinformation campaign. Trump also savaged Hunter’s issues in the presidential debates, though US voters appear to have ignored the personal attacks.

Hunter said: “My father has been a constant source of love and strength in my life… He loves me. And he loves the American people far too much to let any form of adversity stand in the way of service.”

Trump, who has struggled to convey empathy, in defeat may take comfort from Biden’s inspiring triumph over loss.

“The pain had seemed unbearable in the beginning, and it took me a long time to heal,” Biden said. “But I did survive the punishing ordeal, I made it through.”

Related posts:
Hot News
Gold prices headed further south as hopes rise for coronavirus vaccine
Dyson plans $4.9b in investments across Singapore, UK, Philippines
EU braced for bombshell Italexit as plot to leave in TWO years emerges
Sicko lured girl, 11, to windmill before raping her and cycling away
Amazing athlete smashes records as first Down’s Syndrome Ironman finisher
Recent Posts
This website uses cookies to improve your user experience and to provide you with advertisements that are relevant to your interests. By continuing to browse the site you are agreeing to our use of cookies.Ok