Number of hospitalised patients falls in the nine days up to May 7 while capital reports only 10 new cases on Wednesday. 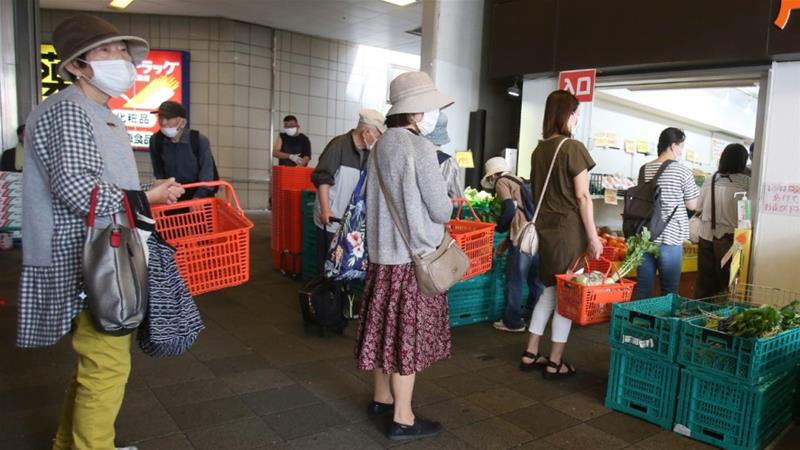 Japan’s government is holding a coronavirus task force meeting on Thursday to secure experts’ approval on a plan to lift an ongoing state of emergency in most areas ahead of schedule, except for Tokyo and several other higher-risk areas.

Prime Minister Shinzo Abe declared a month-long state of emergency on April 7 in the capital and six other urban prefectures and later expanded it to the whole country until May 31.

With signs of the infections slowing, Abe wants to relax the measure and balance disease prevention with the economy.

He is expected to make a statement later on Thursday to outline his plan for the world’s third-largest economy.

Japan has more than 16,000 confirmed cases of coronavirus, with about 680 deaths. The number of new cases has significantly decreased nationwide.

While Japan has avoided the kind of explosive growth seen in the United States and elsewhere, its testing has also been among the lowest, at 188 polymerase chain reaction (PCR) tests for every 100,000 people, compared with 3,159 in Italy and 3,044 in Germany.

Although Japan’s state of emergency declaration lacks enforcement powers, mobility data has shown a marked drop in the movement of people.

The government this week reported a 20 percent fall in the number of hospitalised COVID-19 patients in the nine days to May 7, to 4,449. In Tokyo, new cases fell to just 10 on Wednesday.

Economy Minister Yasutoshi Nishimura, in his opening remarks at the task force meeting on Thursday, asked experts to provide a basis for easing the measure, a well as its possible tightening, in case of a resurgence of the outbreak.

Experts and officials have urged people to adopt “new lifestyles” and continue practising physical distancing measures such as remote working, even after the state of emergency is lifted.

The government is set to add four economists to its advisory panel for combating the epidemic, and another review will be conducted again in about a week.

Economists said any normalisation would be gradual as the government treads cautiously with an eye on a possible second wave of infections such as seen in countries such as South Korea and China.

“The focus is whether the government will lift the emergency on the big areas such as Tokyo and Osaka before the end of May, as was initially planned,” said Atsushi Takeda, chief economist at Itochu Research Institute.

“If it does, economic recovery will likely be faster than previously estimated.”

Fast Retailing Co, owner of casual clothing chain Uniqlo, which had already started to reopen outlets across the country, said it planned further reopenings from Friday once the state of emergency is lifted.