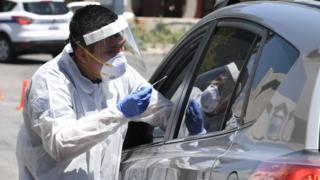 US President Donald Trump says the US has done the “greatest testing” in the world – but Chinese state media says China has carried out three times more tests than the US.

“We have more cases because we do the greatest testing… Other countries, they don’t test millions.”

The US has carried out almost 31 million coronavirus tests, according to the latest data.

That is more than any other Western country, but significantly less than China’s reported total of over 90 million.

Exact testing comparisons can be difficult. Some countries count the number of people tested, while others count the total number of tests as someone can be tested several times if the first test doesn’t work properly.

The US largely reports people tested, but some states report the total of tests carried out. China’s reported total is of the number of tests conducted.

“Throughout China, the number a week ago was 90.41 million, three times the number in the US.”

In a tweet containing these figures, Hu Xijin, the editor-in-chief of the Global Times, a state media outlet, also called President Trump’s claim that the US had carried out the most tests a “pure lie”.

The Chinese National Health Committee’s data, which is compiled by the Chinese government and cannot be independently verified, confirms, as of 22 June, China had conducted 90.41 million tests.

So the total is roughly three times the amount in the US, but China has a much larger population.

Based on these figures, China has carried out about one test for every 15 people, compared with about one in 11 in the US. So that’s slightly more per head of population in the US.

And China’s testing has been more localised, with over a third of tests carried out in Beijing, Wuhan and the most populated province, Guangdong, according to local reports.

The methods of testing are also different in the two countries.

China’s daily testing capacity has rapidly increased thanks to batch testing – grouping samples together and carrying out individual tests only if a batch proves positive.

Dr Anthony Fauci, the White House’s top infectious disease expert, has said the US is “seriously considering” this method.

But it would work only in regions where the number of infections is low, as it is inefficient if a high proportion of the batches test positive.

Send us your questions