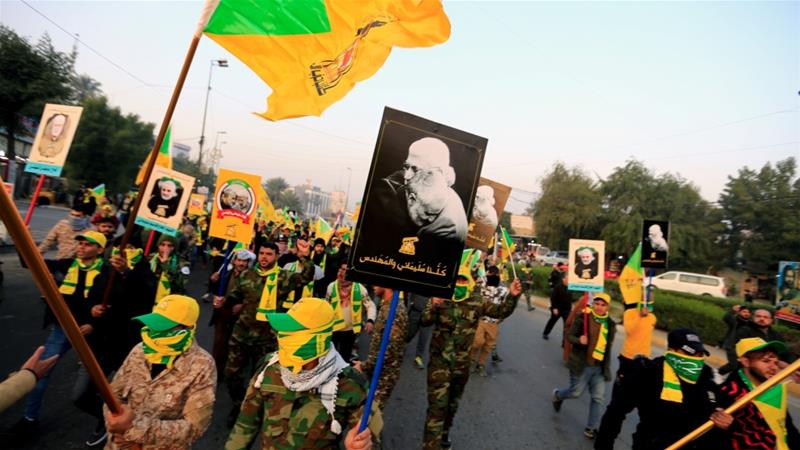 Iraqi security forces have raided a base belonging to a powerful Iran-backed armed group in southern Baghdad and detained at least 14 militia members, sources have told Al Jazeera.

The raid late on Thursday was the most brazen action by Iraqi forces against a major Iran-backed group in years and targeted the Kataib Hezbollah faction, which United States officials have accused of firing rockets at bases hosting US troops and other facilities in Iraq.

Al Jazeera’s Simona Foltyn, reporting from Baghdad, said Iraq’s elite Counter Terrorism Service seized at least 10 rockets during the operation, which was “carried out an in effort to pre-empt an impending rocket attack on the Green Zone and Baghdad International Airport, both of which house US troops”.

“Subsequently, dozens of armed Kataib Hezbollah fighters arrived in the Green Zone and laid siege to one of the buildings belonging to the Counter Terrorism Service, demanding the release of the detainees, claiming they were arrested illegally without an arrest warrant,” she said.

Kataib Hezbollah itself is part of Iraq’s security apparatus, she noted, as the group is part of the state-funded Popular Mobilisation Forces (PMF), a Shia paramilitary dominated by Iran-backed armed groups.

The raid was the first sign that the government of Iraq’s new prime minister, Mustafa al-Kadhimi, intends to make good on promises to take tough action against groups that have targeted US installations.

It took place after a number of rocket attacks near the US embassy in Baghdad and other US military sites in the country in recent weeks.

“If those detained are released, this would be a rather embarrassing to the new government,” said Foltyn, “as the raid was carried out on al-Kadhimi’s orders and the prime minister has made it one of his priorities to constrain the weapons in the hands of the state and to rein in groups such as Kataib Hezbollah.”

The Reuters news agency said a spokesman for the US-led coalition in Iraq and Iraqi paramilitary sources denied claims that any of those arrested had been handed over to the US military.

Tensions between Washington and Tehran especially on Iraqi soil have been high for at least a year.

It nearly spilled into regional conflict in January after the US killed Iranian General Qassem Soleimani and PMF commander Abu Mahdi al-Muhandis in a drone strike at Baghdad airport.

Foltyn said Thursday’s events were “very much a throwback to December 31 of last year, when Kataib Hezbollah laid siege to the US embassy inside the Green Zone after the US attacked its base on the Iraqi-Syrian border”.

She added: “Those events ended up escalating, culminating in the killing of Qassem Soleimani on Iraqi soil. There is fear that events could once again escalate.”

Yasmin Amin-Zaki, Iraq analyst and former chief of communications for the United Nations mission in Iraq, described the raid as an effort by al-Kadhimi to assert control over the state.

Since the defeat of the Islamic State of Iraq and the Levant (ISIL or ISIS), “it’s been increasingly clear that the biggest threat to the Iraqi state is these Shia militias,” she told Al Jazeera from Memphis in the US.

But curbing the PMF’s influence remains a huge challenge for al-Kadhimi because of Iran’s support for the paramilitary force, meaning the proxy war between US and Iran was likely to continue in Iraq, said Ami-Zaki.

“What we’ll likely see now is a stalemate between the two, as they continue with this proxy war. And I think it’s increasingly clear now – particularly following the events of December 31 – that these two countries are not necessarily interested in going to war with one another. But they are very much interested and motivated to continue this proxy war in Iraq,” she added.

Both Tehran and Washington supported al-Kadhimi in becoming prime minister in May.