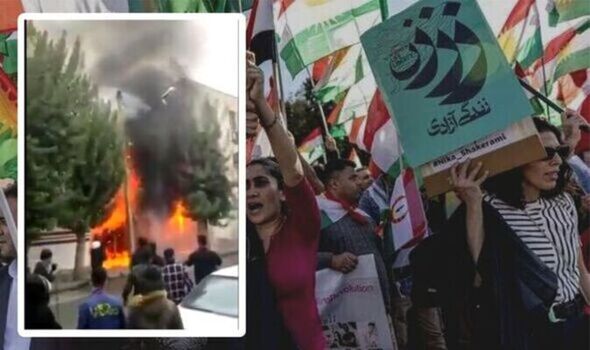 Images have emerged purportedly showing a governor’s office being burned down in the Iranian city of Mahabad. Tens of the thousands have taken to the streets again in a continuation of widespread protests following the death of Kurdish Iranian woman Mahsa Amini last month. The escalation occurred following demonstrations marking 40 days since Ms Amini’s death. Crowds chanting ‘death to the oppressor’ took charge of a local police station, on-the-ground witnesses have told Express.co.uk. State media has reported that three demonstrators were killed during clashes with Iranian security forces.

Express.co.uk was shown reports, by a local in Iran, of protesters occupying a Governor’s office in Mahabad on Thursday.

A source  said “men and women from all age groups and sectors” are fighting back against the government’s “repressive regime”.

Following a night of heavy protests on Wednesday, Iran’s security forces are said to have reacted by using firearms against demonstrators.

While state media has not identified the victims, opposition outlets claimed a man and two women were shot dead.

Express.co.uk has not been able to independently verify these allegations.

The burial ceremony of Ismail Moloudi, which was attended by a large number of people, turned into an anti-government protest, eyewitnesses said.

Protesters later occupied the Governor’s building, setting fire to it, according to on the ground accounts, who have supplied video from the scene.

At the same time, other demonstrators stormed into a local police station and took control of the building.

No one inside is believed to have been hurt.

Friday marks the 42nd day of the uprising in Iran, which has seen protests in over 199 cities, following the death of Mahsa Amini.

Tens of thousands of people have taken to the streets over the 22-year-old’s death. Ms Amini died in police custody after she was arrested in Tehran for allegedly breaching the Islamic dress code for women.

There have been an estimated 400 deaths and 20,000 arrests by Iran’s forces since the uprising erupted six weeks ago.