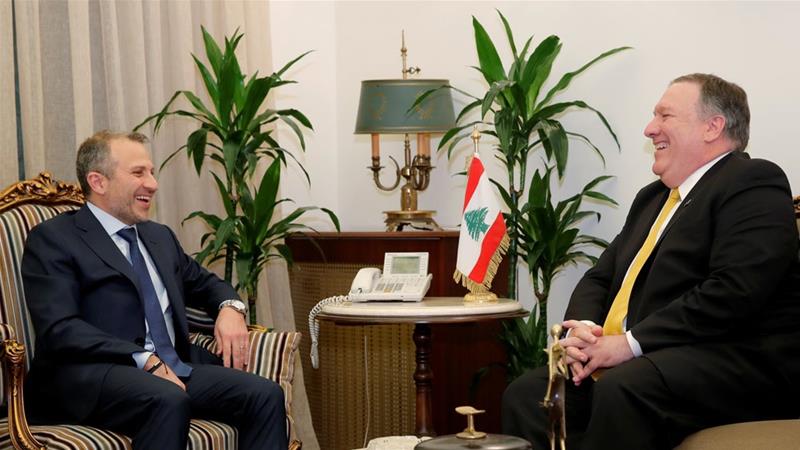 US Secretary of State Mike Pompeo has warned Lebanon’s leaders of what he called Hezbollah’s “destabilising activities” in the country and across the region, in comments that put him at odds with his Lebanese hosts.

Pompeo, who is on a Middle East tour to drum up support for Washington’s harder line against Iran, urged Beirut on Friday to pick a side as his country sought to build a united front against Tehran and its Lebanese ally.

“Lebanon and the Lebanese people face a choice: bravely move forward as an independent and proud nation or allow the dark ambitions of Iran and Hezbollah to dictate your future,” Pompeo said standing alongside Lebanese Foreign Minister Gebran Bassil during a joint news conference.

“The US will continue to use all peaceful means, everything at our disposal to choke off the financing, the smuggling, the criminal network and the misuse of government positions and influence,” he added in a veiled reference to the fact the Lebanese armed group holds three cabinet posts.

Pompeo also said that US sanctions on Iran and Hezbollah were working, citing a speech this month by the latter’s leader, Hassan Nasrallah, asking the group’s supporters for funds as evidence of the punitive measures’ efficacy.

“Our pressure on Iran is simple. It’s aimed at cutting off the funding for terrorists and it’s working,” Pompeo said, adding that Iran gave Hezbollah as much as $700m annually. “We believe that our work is already constraining Hezbollah’s activities.”

The United States has branded Hezbollah a “terrorist” organisation.

While a few inches separated Washington’s top diplomat from his Lebanese counterpart, their positions on the topic seemed to be anything but similar.

“Hezbollah is a Lebanese party, not a terrorist group, and it enjoys a wide popular base,” said Bassil, who is a political ally of the group.

Lebanon’s presidency also said President Michel Aoun had similarly told Pompeo during a meeting that Hezbollah was Lebanese party, suggesting that it enjoyed all the rights and prerogatives afforded to political organisations.

“Preserving national unity and civil peace is a priority for us,” Aoun told Pompeo, the presidency said on its Twitter feed.

“We don’t want our ties with America to be affected and we want to work together to solve problems, including the issue with Hezbollah,” he added, stressing that Lebanon’s stability is of mutual interest to both states.

A Lebanese foreign ministry official said a question and answer session with the media was cancelled “at the behest of the Americans.

Pompeo also met Nabih Berri, the speaker of the Lebanese Parliament, with the men discussing among others “the need to maintain calm along the boundary between Lebanon and Israel”, Robert Palladino, deputy spokesman of the US State Department, said.

Lebanon and its southern neighbour Israel are still technically at war, even after Israeli troops withdrew from the south of the country in 2000. Israel and Hezbollah fought a devastating month-long war in 2006, and skirmishes still erupt along a UN-patrolled demarcation line.

Hezbollah’s Ali Damush questioned the timing and purpose of Pompeo’s visit during his Friday sermon.

“What are the Lebanese expecting from America and its foreign minister after these two announcements that are totally biased in favour of Israel, except for inciting (Hezbollah) and turning Lebanese against each other?”.

Hezbollah fighters have backed government forces in neighbouring Syria in the war that broke out there in 2011.

Pompeo “commended the Lebanese people for hosting more than one million Syrian refugees”.

In a meeting with Interior Minister Raya al-Hassan, Pompeo “discussed regional and internal security challenges facing Lebanon and how the United States can help support the interior ministry’s efforts”.

Hassan became the first woman interior minister in Lebanon and the Middle East in a cabinet line-up unveiled in late January following an eight-month delay.