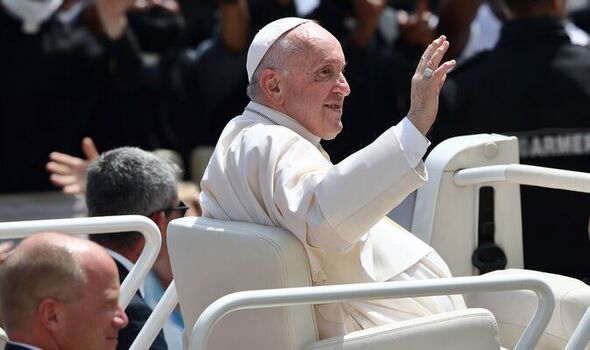 The dialogue occurred during his weekly general audience last Wednesday. A video of the 85-year-old pontiff asking for the famous Central American drink was posted on social media and quickly went viral. The conversation was filmed by one of the Mexican priests in attendance, 20minutes.fr reported.

The priests kindly asked the pontiff about his health, and how he has been coping with the knee pain that left him with difficulty walking.

Pope Francis has been struggling with mobility issues as he suffers from sciatica, a condition where the sciatic nerve, which runs from the lower back to the feet, is irritated or compressed.

During the past few weeks, he has been attending public engagements using a wheelchair.

But when he was asked how he was feeling last week, he candidly replied: “Do you know what I need for my leg? A bit of tequila,” to which everyone laughed.

And the priests replied: “If we ever go to Saint Martha’s, we’ll bring you a bottle,” they assured him, referring to the Pope’s residence in the Vatican.

A priest then said to the Pope: “Thanks for your smile, your joy in being here despite your problems. You also give a good example for future priests.”

Because of his condition, the pontiff had to cancel a trip to Lebanon scheduled for mid-June.

Back in April, the Pope said he was mainly treating his knee pain by regularly putting ice on it and taking painkillers.

Sciatica can cause stabbing pains that can cause burning, or shooting sensations, according to the NHS website.

This is not the first time that the Argentine pontiff has joked and displayed his good sense of humour with the people who greet him during the general audience.

Nor does he spare ironic comments about the pain in his right knee that he has been suffering for months.

In January, he explained his health problems to the congregation at a general audience: “It’s a temporary thing.

“They say it only happens to old people, and I don’t know why it happened to me…” he concluded with a smile, to the applause of the audience.