Analysis of the video suggests it is genuine, but experts said it was not possible to state when or where it had been filmed. Ukrainian politicians reacted with outrage and repeated calls for Western nations to arm them so they could push the Russian invaders from their borders.

Since the invasion began over five months ago, Russian soldiers have been accused repeatedly of dreadful crimes against civilians and captured fighters.

Ukrainian women and children are said to have been raped by Putin’s occupiers, and there have been widespread accounts of torture.

The gory castration footage was shared by a Telegram account believed to belong Yevgeny Rasskazov, a member of the DShRG Rusich company – an allegedly neo-Nazi outfit linked to the Wagner group – who has previously praised Adolf Hitler.

The account, referring to Ukrainian soldiers as “children of prostitutes”, accused the defending forces of “very often question our soldiers, and often soldiers who cannot possess any information that would be expedient to obtain through torture. 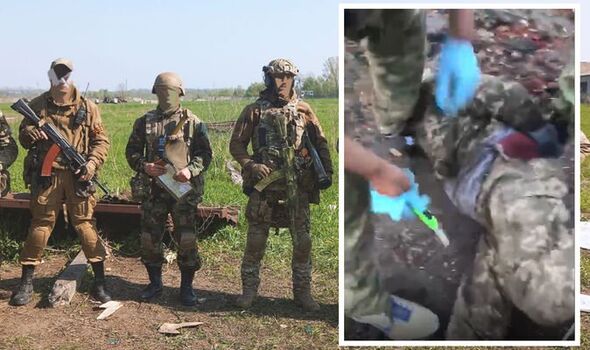 “They do it out of sadism, often recording crimes on camera. So, Ukrainian bastards, know that the heads of your sons are already decorating the fences of some houses in the liberated territories, their genitals are being eaten by stray dogs,” they claimed in a foul-mouthed rant.

In the video, a man – who appears to be a Russian soldier or mercenary, wearing the now-famous ‘Z’ symbol – is seen wielding the Stanley knife while other men hold the captured soldier down.

The Ukrainian soldier is kicked in the head as he struggles on the floor, his arms bound and his mouth gagged.

The first man proceeds to rip the captive’s army fatigues open and mutilate his genitals, holding them up in his hand triumphantly before tossing them to one side. 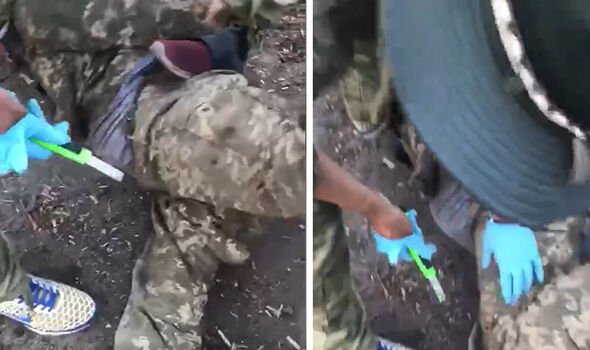 Aric Toler, a researcher for investigative website Bellingcat, told the Times that “unfortunately the video is genuine” and showed no signs of editing or manipulation.

Several other Russian soldiers are visible in the horrific footage, some of whom were filmed on the front lines in the Donbas region last month.

Mr Toler said he had been able to identify the Russian soldier – potentially called Arslan – because he had appeared in a Russian television clip filmed at the seized Azot chemical plant in Severodonetsk.

The soldier filmed in June was wearing the same distinctive hat and bracelet in both clips. A ‘Z’ symbol on a car in the new footage also suggests the incident occurred since the invasion of Ukraine began. 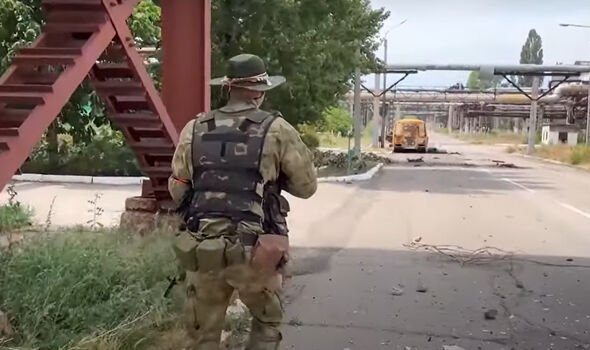 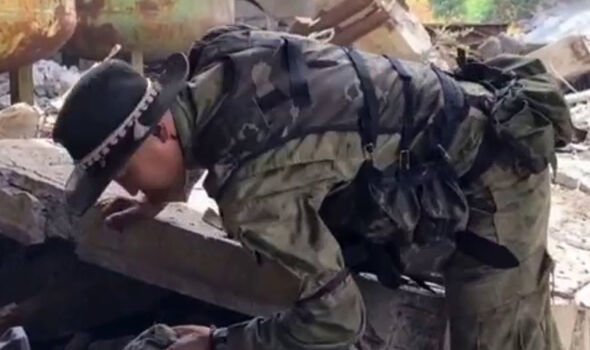 Reacting to the disgusting clip, Mikhailo Podolyak, an adviser to Ukrainian President Volodymyr Zelensky, wrote on Twitter: “All the world needs to understand: Russia is a country of cannibals who enjoy torture and murder.

“But the fog of war will not help to avoid the punishment of the executioners. We identify everyone. We will get everyone.”

Inna Sovsun, a Ukrainian MP, commented: “Russia has to pay for it.”

Hours after the footage was first posted online on Thursday, a Telegram account belonging to DShRG Rusich offered further commentary on the video. 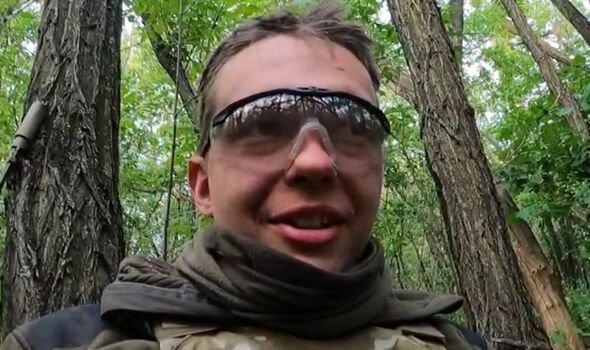 It argued: “Russia is waging this holy war with the hands of a Russian soldier. Right now, at this very second, thousands of young Russian men, being in the hardships of war, risking their lives, are working for the future of our country.

“And if one of these men decided to castrate a soldier of the Ukrainian Armed Forces, then he had damn good reasons for it.”

The account went on to allege that “our enemy does this en masse, laughing and raging at his own impunity, because he knows that the most terrible thing that awaits him is deprivation of freedom, delicious Russian rations and qualified medical assistance.

“There are people who are quite rightly not satisfied with this. We do not condemn these people.”