Pro-democracy legislators carried out of assembly as pro-Beijing legislators attempt to seize control of key committee. 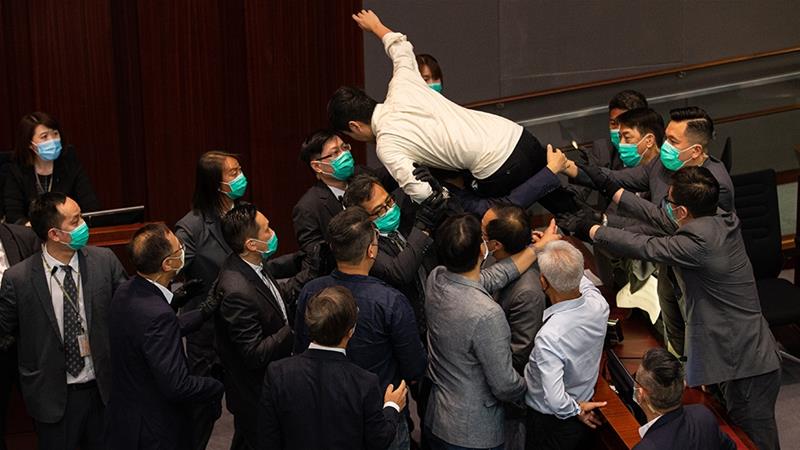 Scuffles broke out between pro-democracy and pro-government legislators in Hong Kong over the leadership of a key committee which could pave the way for a debate on a controversial China national anthem bill.

In chaotic scenes on Monday, pro-democracy legislators charged at security guards surrounding pro-establishment legislator Chan Kin-por, who had taken the chairman’s seat in the meeting against procedural objections by the opposition.

One video posted on social media showed Democratic Party Chairman Wu Chi-wai being grappled by the chamber’s security personnel, while another showed legislative member Ted Hui being physically carried by at least seven masked personnel out of the hall.

“It’s an illegal meeting. I hope you can leave immediately,” Hui shouted at Chan.

As the scuffle erupted, Claudia Mo, another independent member of the council, was seen holding up a sign which read, “CCP tramples HK Legislature”, referring to the Chinese Communist Party.

The house committee’s role is to scrutinise bills before a second reading in the legislative council. It is facing a backlog of bills after failing to elect a chair since late last year.

The backlog includes one bill that would criminalise alleged “abuse” of China’s national anthem, which is expected to be given a second reading on May 27 despite the procedural chaos.

Protesters have been calling on social media for city-wide demonstrations on that day.

Physical distancing measures imposed as a result of the pandemic helped slow anti-government rallies that had become increasingly violent as 2019 wore on, but protesters have begun to re-emerge in recent weeks.

The arrest of 15 activists in April, including veteran politicians, a publishing tycoon and senior lawyers, thrust the protest movement back into the spotlight and drew condemnation from the United States as well international rights groups.

The trial of the accused opposition leaders and activists is scheduled to begin later on Monday.

China’s Hong Kong affairs office warned this month that the city would never be calm unless all “black-clad violent protesters” were removed, describing them as a “political virus” that seeks independence from Beijing.

Beijing blames foreign forces for fomenting unrest and says protesters are undermining the rule of law in Hong Kong.

The legislative council has become a battleground between the pro-China and pro-democracy factions of the city, which is supposed to enjoy freedoms not seen elsewhere in China under the “one country, two systems” framework that was agreed when the former British colony was returned to Chinese rule in 1997.

Tensions have escalated over what residents perceive as China’s efforts to curb those freedoms.