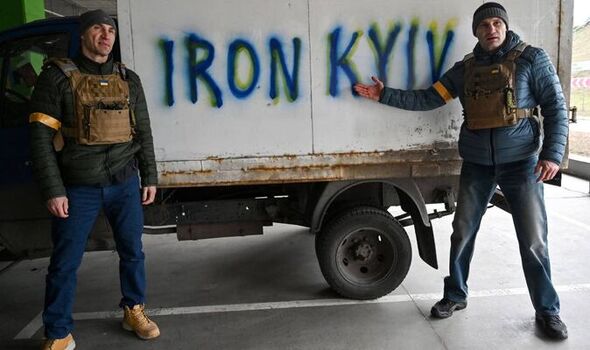 The former world heavyweight champion and his brother Vitaly, mayor of capital Kyiv, are inspiring freedom fighters against the Russian invasion.

The 6ft 6in Ukrainian, whose run of 19 consecutive world title fight wins was ended by Fury in 2015, warned from his country’s front line: “Boxing is sport – this is war, and our people are dying.

“During this conversation…innocent women, children and civilians will be subjected to bombs, missiles and horrifying reality of war. People say this is the biggest fight of my life, and I agree – it’s so sad to realise how terrifying the war is.”

He urged “all the people of Great Britain to back our campaign and to act now, in any way possible, to help Ukraine.”

He added: “To isolate Russia from all sporting competition is not an act of aggression. We do this to stop the war, in the name of peace. I have nothing personal against the athletes, but I have a lot against the aggression of Russian leader Putin.

“Sanctions on different levels, including sport, are crucially important. The athletes will ask their leader, ‘Why will nobody compete against us?'” A smiling Wladimir, 45, earlier visited a maternity hospital in Kyiv. In footage on Sky he said: “Life goes on – 82 kids were born in this hospital since the beginning of the war, so more Ukrainians are coming up.

“Innocent civilians are being forced from their homes. With each passing moment the situation becomes more serious and Ukrainians are dying. It’s important to act now. Don’t delay because every single minute, every single hour of every day counts. Women and children are fleeing their homes…they have no idea if they will see their husbands or fathers or sons again.

“It is so important that governing bodies follow the IOC (International Olympic Committee) example by excluding Russian athletes from international events. We must exclude Russian teams to play.”

The boxing Klitschkos had a total of 40 world title bouts. Sons of a former Soviet air force major-general, they are now standard bearers for Ukraine’s resistance against Putin’s troops. Wladimir signed up for the Kyiv Territorial Defence Brigade last month to defend the city.