After days of cloud and drizzly rain, the weather is due to pick up from today (Thursday, July 15), with many areas expected to see temperatures above 20C on Friday. The Met Office told Express.co.uk earlier this week some isolated highs of 29C could be possible in the south-east on Friday, with some hot weather also forecast to continue over the weekend.

However on Sunday the temperatures are expected to dip slightly, and WXCHARTS weather maps indicate the start of next week will not be quite so hot.

But later in July the mercury is forecast to rise once again, with many parts of the country expected to see temperatures above 20C.

According to WXCHARTS maps, which use data from MetDesk, the temperatures will noticeably start to rise from Thursday, July 23.

On this date much of central, eastern and southern England are forecast to see maximum temperatures above 20C. 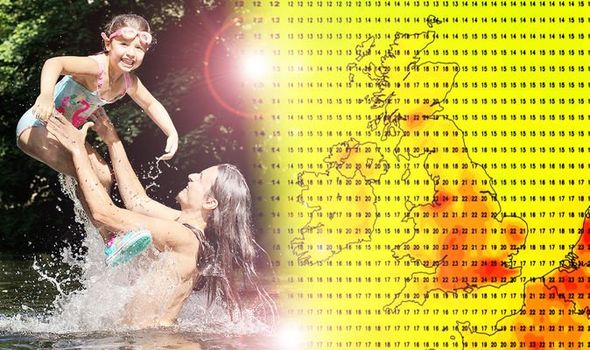 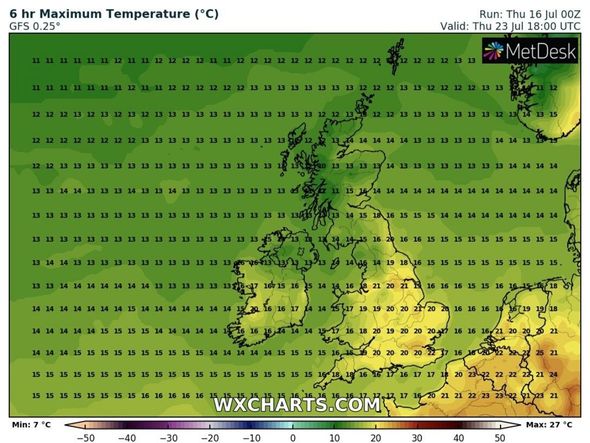 The highest temperature of 22C is forecast for the south-east of England.

However weather maps for Friday, July 24 show the heat spreading a bit further northwards, with parts of northern England also expected to see maximum temperatures hovering around 20 to 21C.

By the weekend, Netweather maps show maximum temperatures of 25C could hit the south-east of England on Saturday, July 25.

Across the south-east and south of England, maximum temperatures are forecast to be in the range of 21C to 24C. 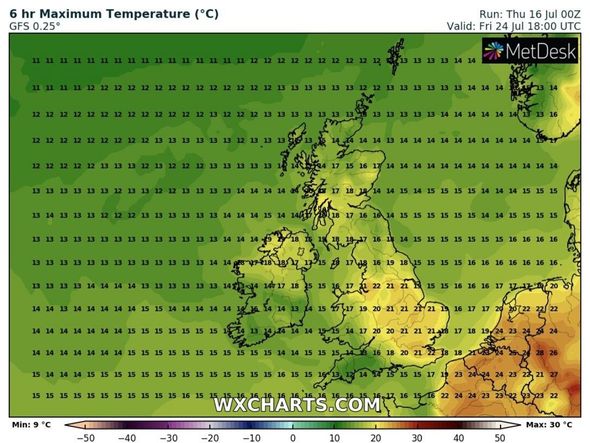 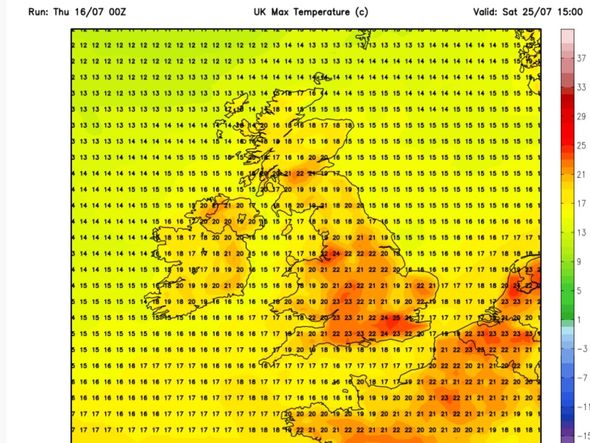 A similar picture is also forecast for parts of northern, eastern and central England.

Scotland is predicted to see widespread temperatures within the high teen’s range, with some areas getting heat as high as 22C.

Northern Ireland is also likely to see temperatures above 20C on this date, as are many parts of Wales.

In their long-range weather forecast for Monday, July 20 until Wednesday, July 29, the Met Office are predicting “dry weather and sunny spells” around the time of the weekend of July 25 to 26 for some regions.

However northern and northwestern parts of the UK will also see some rain spells and some strong winds at times.

The Met Office state: “Most areas will be mostly dry into the middle of next week, beyond which it is likely that the settled conditions will continue for many central and southern areas, bringing dry weather and sunny spells here.

“Northern and northwestern parts will probably turn increasingly unsettled with spells of rain accompanied by stronger winds at times.

“Later in the period there is a chance that the unsettled conditions across the north may spread more widely across the rest of the UK. 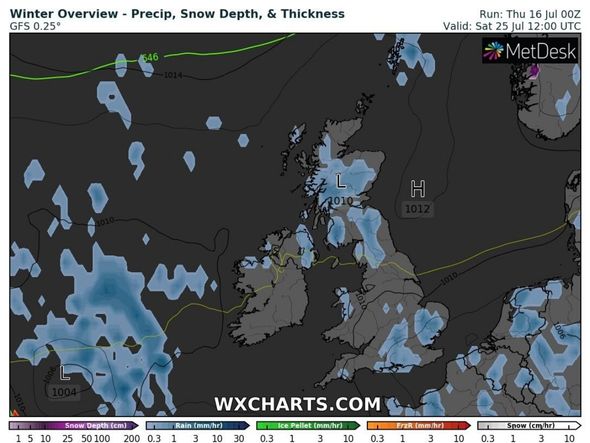 “Temperatures near or slightly above average but perhaps warm or at times very warm in the south.”

As July turns to August, the Met Office are predicting many parts of the UK “are likely to see periods of drier and settled weather”.

The south is expected to see the best of the warm weather at the start of August.

And although there will be some sunny spells, there are also expected to be some spells of wet weather, largely across the north and west of the UK.

Related posts:
Hot News
Girl, 11, pregnant after being ‘raped by predator, 41, in supermarket car park’
Colorado geophysicist charged in Capitol riot claimed to be “patriot warrior” who answered “call to battle” – The Denver Post
Golden retriever’s hilarious reaction to smelling shampoo leaves viewers howling
Covid-19 coronavirus: UK’s ‘tsunami’ of grief as deaths pass 100,000
hair loss synthroid
Recent Posts
This website uses cookies to improve your user experience and to provide you with advertisements that are relevant to your interests. By continuing to browse the site you are agreeing to our use of cookies.Ok