Survivors and families of those killed during country’s internal conflict march to reject proposed amnesty bill. 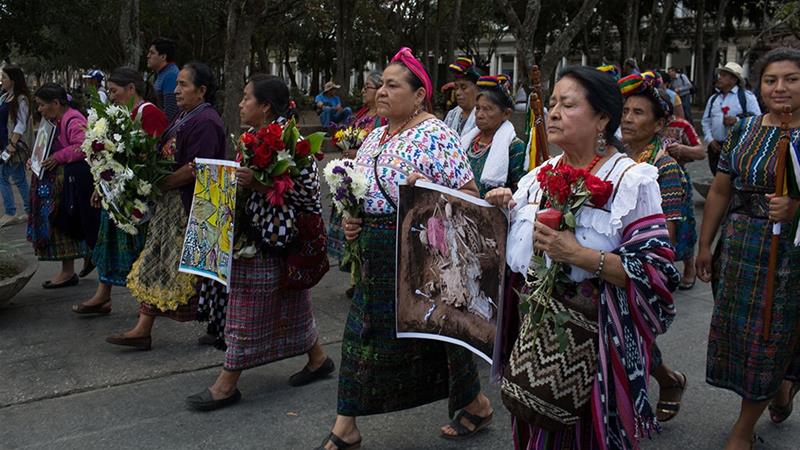 Guatemala City, Guatemala – Cristina Yaqui was 19 years old when her husband Simon Saq’boch was abducted by the Guatemalan military from the municipality of Patzun in the Guatemalan Department of Chimaltenango in 1984. Yaqui, now 53, never saw him again.

“He always remains in my mind,” said Yaqui, a Maya Kaqchikel woman and a member of the Mutual Support Group, an organisation founded in the 1980s to help family members locate their loved ones who have gone missing in Guatemala. The Guatemalan military has been blamed for their abduction during the country’s internal armed conflict.

“We do not know what the military did with him,” she told Al Jazeera. “Others have found their loved ones [in mass graves]. Maybe they took him to another place.”

During the war, Yaqui also lost her father, uncle, cousin, and both her parents-in-law.

The Guatemalan internal armed conflict raged between 1960 and 1996, killing an estimated 200,000 people and displacing more than one million people. Forty-five thousand people are still unaccounted for.

Yaqui searched from town to town, at military bases and police stations in the neighbouring regions, only to encounter indifference from the police and soldiers.

‘We are still afraid today’

More than three decades later, she is still searching for her loved ones.

“We are tired of continuing to struggle and struggle without an answer,” she said. “We were displaced and filled with fear. We are still afraid today,” she added.

The day of commemoration for the victims of the war was established following the signing of the Peace Accords in 1996 as a day to remember those affected by the war.

The march also commemorates the 20th anniversary of a United Nations-backed Commission for Historical Clarification report: The Memory of Silence.

Furthermore, the commission determined that 83 percent of the victims were indigenous Maya, while 17 percent were non-indigenous. As a result of these findings, the commission concluded that acts of genocide occurred during the war.

The proposed reform would extend amnesty to military officials accused of war crimes. The law is set to be debated in the second round of discussions on Wednesday.

During the march, organisations attempted to deliver letters to congressional representatives rejecting the amnesty law.

“We cannot permit [that the law is] applied,” Rigoberta Menchu, the 1992 Nobel Peace Prize laureate and survivor of the internal armed conflict, told Al Jazeera.

“We have many means in the courts to stop it,” she said. “This is a new opportunity of struggle that we have.”

Most of those gathered outside the country’s Supreme Court for the march were affected by the war and have spent decades demanding justice for their loved ones.

She was 17 years old in 1984 when her-then 18-year-old brother, who wanted to be a primary teacher and still at school, was forcibly abducted by the military in a night raid at the family’s home in Guatemala City in search of weapons. No weapons were found.

Manuel was tortured in the family’s home before his abduction.

“We didn’t hear anything more about my brother until the Military Diary was released in 1999,” Salanic told Al Jazeera.

The Military Diary was a list of 183 people who were forcibly disappeared by the Guatemalan military between 1983 and 1985. While their names appear on the list, few of the remains of the missing have been recovered.

“The truth is that is this a cycle that we have not been able to close,” Salanic said, holding back tears. “It still hurts. We will not ever forget him,” she added.

“We are not able to forgive [the military] or forget what happened.”

As the Guatemalan Congress pursues the amnesty law, families of the missing continue to demand a law that would set up a commission to search for those still unaccounted for. The law has remained in discussion in Congress for 12 years.

“We have the right to rise up to demand justice for our dear family members,” Yaqui said.