Supreme Court vacancy will bring social issues into greater focus in campaigns so far dominated by coronavirus and race. 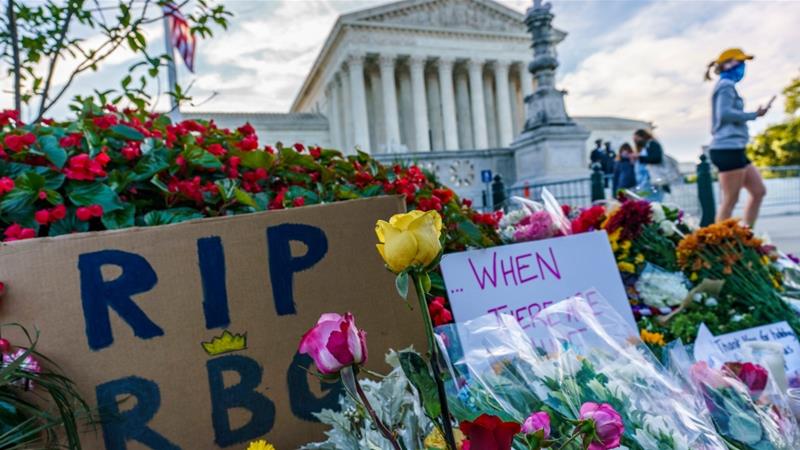 From gun and voting rights to the Obama-era Affordable Care Act, several social issues elbowed out of the US election season due to the coronavirus pandemic and racial unrest are now expected to come to the forefront following the death of Supreme Court Justice Ruth Bader Ginsburg, and the pledge by Senate Republicans to vote on her replacement before the November 3 polls.

With conservatives jockeying to create a six-to-three majority in the highest court in the land, the coming weeks are also set to bring new urgency to the ever-contentious battle over abortion. An appointee by President Donald Trump would further stack the Supreme Court, which already has five justices with staked positions against abortion rights.

“All of the people Trump has named as potential nominees are known to be anti-abortion,” Melanie Sloan, a former federal prosecutor, told Al Jazeera, referring to a list of more than 40 Supreme Court candidates Trump previously promised to choose from in case of a vacancy.

“There’s already a five-four majority of anti-abortion judges, and if Trump is able to put somebody else on the bench that’ll give them a six-three majority,” said Sloan, who was council for the Senate Judiciary Committee during Ginsburg’s 1993 confirmation hearing.

“A new anti-abortion judge would be all they need to overturn Roe vs Wade,” she said, referring to a landmark 1973 ruling that federally protects a woman’s right to seek an abortion without excessive government restriction.

In a statement on Friday, the Susan B Anthony List, a leading anti-abortion rights group, said the opportunity to fill Ginsburg’s seat was “a turning point for the nation in the fight to protect its most vulnerable, the unborn”.

Meanwhile, Republican Representative Doug Collins garnered rebuke for tweeting on Friday: “RIP to the more than 30 million innocent babies that have been murdered during the decades that Ruth Bader Ginsburg defended pro-abortion laws”.

He added that Trump would nominate a “replacement that values human life”.

On the other side of the issue, officials from Planned Parenthood – the largest provider of reproductive healthcare and abortions in the US – and other groups that advocate for abortion rights said they would uphold the legacy of Ginsburg, a stalwart champion of abortion rights.

Justice Bader Ginsburg understood that those with power and means will always be able to get an abortion while unnecessary barriers push care out reach for the rest.

“The stakes just got even higher this election – our health, our bodies, and our lives are all on the line,” Jenny Lawson, executive director of Planned Parenthood’s voting outreach arm said in a statement, warning Senate Republicans who vote to approve a Supreme Court nominee before the election that they will be held accountable at the polls.

“The fate of our rights … and our country depend on what happens over the coming months,” Alexis McGill Johnson, president of Planned Parenthood, said in a statement.

Abortion and the electorate

With anti-abortion rights sentiment an “anchor” of the Republican base, the coming weeks may help Trump shore up evangelical and conservative Christian support before November 3, either by giving him an election-year coup in having his third Supreme Court nominee appointed or by hanging the prospect of shaping the court for years to come over the ballot box, said Thomas Patterson, a professor of government and the press at Harvard Kennedy School.

“In the 2016 election, Trump won the white evangelical Christian vote by four-to-one. And they had the highest turnout of any demographic group – up around 85 percent turnout,” Patterson told Al Jazeera, adding the demographic accounts for about a quarter of the electorate.

“[Trump] was never going to lose their vote … but there appeared to be some weakening of his support with that group,” he added. “In a close election, votes on the margin matter.”

A threat to abortion rights may also play into the ongoing battle for the support of suburban women in key battleground states, said Joe Watkins, a former aide to ex-President George HW Bush. Trump has tried to appeal to the demographic through a “law and order” message that says cities and suburbs are under threat from violent agitators amid months of racial justice protests.

“You’ll hear Democrats say to suburban women: Ruth Bader Ginsburg was a champion for women’s rights. And we don’t want to see the clock turn back. And so they will use that as a way to win back suburban women,” Watkins told Al Jazeera.

“And if Republicans try to rush a Republican conservative nominee to the Supreme Court, Democrats will cry foul, and they’ll use that as a reason to say that’s why we need to elect Joe Biden as president,” he said, referring to Trump’s Democratic rival.

If Republicans do prove successful in pushing through a nominee before the election, and Democrats then win the presidency and take control of the Senate, there will be “immense pressure” on them to “pack the court” as a corrective measure, added Sloan, referencing a term that traces back to the 1937 legislative effort by then-President Franklin D Roosevelt to extend the Supreme Court from nine to up to 15 judges.