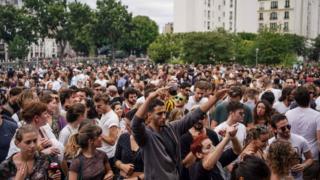 Revellers ignored social distancing rules and danced in the streets for the Fête de la Musique, known as Music Day in English.

Police clashed with some revellers in Paris and with demonstrators in Nantes, using tear gas against protesters.

France has eased many of its coronavirus restrictions. President Emmanuel Macron declared a “first victory” over the virus earlier this month, and on Monday schools reopened for all pupils under the age of 15.

But there are worries the government is lifting the lockdown too quickly. France has confirmed 160,377 cases of the virus and 29,640 deaths – the fifth-highest tally worldwide.

What happened on Sunday?

Millions of French people usually pour onto the streets for the annual event, celebrating at official events and also with impromptu concerts.

Health minister Olivier Véran asked people to “continue to respect [social distancing measures] in all circumstances, to protect yourself and your loved ones”.

But images posted online showed thousands thronging roads in cities across the country – including in the Canal Saint Martin and Marais districts in Paris – ignoring distancing rules and largely partying without face masks. Current rules prohibit public gatherings of more than 10 people.

People celebrated well into the night and early into Monday morning. At Les Invalides in Paris police fired tear gas to disperse crowds after some threw projectiles.

In the end, seven people were arrested in the capital.

In France people are supposed to maintain 1m (3.3ft) distance from each other in public, masks are required on all public transport and gatherings of 5,000 or more will not be allowed until 31 August at the earliest.

In Nantes, there was also a demonstration in memory of Steve Maia Caniço, a 24-year-old who drowned in the river during last year’s festival, following a police raid on a free concert.

Thousands marched through the city and eventually clashed with officers.

Many criticised the events online, fearing the mass gatherings could lead to another surge in infections.

“I understand that the Fête de la Musique is liberating but couldn’t we avoid it this year?” asked Dr Gilbert Deray of Paris’s La Pitié-Salpêtrière hospital, saying it would be “catastrophic” if the epidemic returned.

The event came as France prepared to further lift restrictions brought in to tackle the pandemic.

On Monday it became compulsory for all children up to the age of 15 to return to school. French Education Minister Jean-Michel Blanquer on Monday thanked school staff for ensuring children could finally return to class.

Cinemas also reopened throughout the country – albeit with tight restrictions in place.

Authorities say every attendee must have an empty seat on either side of them and must wear a face mask, and no cinema can be more than half-full at any time.