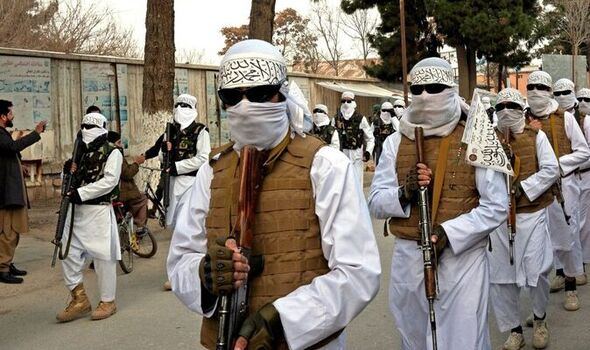 Andrew North was detained in Kabul along with eight colleagues, which included ex-Beeb cameraman Peter Jouvenal.

Family members and friends fear for their wellbeing.

Mr North’s distraught wife Natalia Antelava said: “Andrew was working for the UNHCR trying to help the people. We are extremely concerned for his safety and call on anyone with influence to help secure his release.”

Veteran BBC correspondent John Simpson, 77, added: “Very concerned, not just about Andrew but also about Peter. He is being held in a tiny cell with another Brit. Very little food, no medical care.”

It is not clear when Mr North – who was with the BBC for 14 years as a correspondent for regions including Kabul, Baghdad and Washington – was detained but he has not posted on his Twitter feed since February 3.

It is claimed he was working as a contractor for United Nations High Commissioner for Refugees.

This is the first time the Taliban have detained foreign reporters since storming to power in August.

Former Afghan vice president Amrullah Saleh tweeted about Mr North, saying a lack of media and a “suffocating atmosphere of corruption” under Taliban rule means their “atrocities” are going unexposed.

He added: “As an example, nine citizens of western countries have been kidnapped — among them Andrew North of the BBC and Peter Jouvenal.”

Mr North recently said on his website he had been meeting with Taliban leaders. He added: “The group, once dubbed Islamic Maoists, has not been quite as ruthless as many feared – so far.

“That came through clearly during several weeks I spent travelling around Afghanistan, meeting various Taliban figures and seeing the results in daily life. It all adds to a sense of malaise, with an ominous feeling of worse to come.”

Friends of Mr Jouvenal, a British- German dual national, said he had been held since early December.

They added: We are deeply concerned for his safety. We believe that he may have been detained in error as he was in Afghanistan to discuss investments in the mining industry and had meetings with Taliban officials.” ” Mr Jouvenal is said to be a former soldier and a Muslim who is marriedmeeti officia to an Afghan woman.

UNHCR said: “Two journalists on assignment with UNHCR and Afghan nationals working with them have been detained. We are doing our utmost to resolve the situation.” The

Taliban are increasingly restricting the lives of Afghans, especially females, while an economic crisis has worsened a humanitarian disaster.

The Taliban’s Zabihullah Mujahid said: “Foreign nationals who identified themselves as belonging to an international organisation were detained as they did not have identity cards, licences or necessary documents.

The Foreign Office said: “We are providing support to the families of a number of detained British men.”