The blaze erupted before dawn at Hotel Arpit Palace in a congested part of central New Delhi. 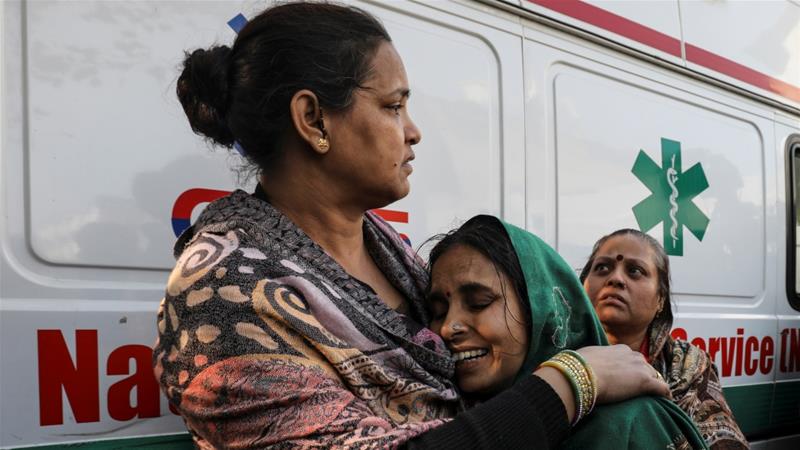 A fire at a hotel in New Delhi has killed at least 17 people, including a child, according to officials.

The blaze erupted in the early hours of Tuesday at Hotel Arpit Palace in a congested part of central New Delhi.

Fire brigade and police officials said the death toll had risen from nine to at least 17 people, with four others sustaining injuries. Images and videos posted on social media showed thick smoke and flames billowing out of the top floor of the hotel.

After an hours-long operation, firefighters rescued 35 people from the hotel, most of which was engulfed in flames.

Among those rescued was Sivanand Chand, 43, a hotel guest who was jolted awake around 4 am, struggling to breathe.

“When I got out of my room, I could hear ‘help, help!’ from adjoining rooms,” Chand told The Associated Press news agency, adding that he opened the window and saw flames rising very fast.

The rescue took about 30 minutes because fire engine ladders could not initially reach his floor, he said.

The injured were taken to local hospitals, but their medical conditions were not immediately known.

The hotel is located in Karol Bagh, an area in India’s capital city full of shops and budget hotels that is popular with tourists.

Accidental fires are common across India because of poor safety standards and lax enforcement of regulations.

In December, six people were killed when a fire engulfed a hospital in Mumbai, the capital of western Maharashtra state.

In 2017, 14 people were killed, also in Mumbai, when a huge blaze tore through a popular restaurant.