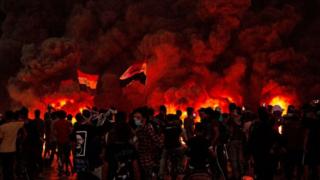 A female political activist has been shot dead in the Iraqi city of Basra, in the third such attack in a week.

Riham Yaqoob, a doctor who led local anti-government protests, was killed by unidentified assailants on Wednesday.

The killing on Friday of another activist, Tahseen Osama, saw protesters take to the streets to demand the authorities uncover those responsible.

Following the killing of Dr Yaqoob, he vowed to “do everything necessary for the security forces to undertake their duties”.

“Complicity with the killers and submitting to their threats is rejected and we will do everything necessary for the ministry of interior and security agencies to carry out the task of protecting the security of society from the threats of outlaws,” he added.

A #woman activist and #medic , Dr Riham Yaqoob, was shot dead today in #Basra in south #Iraq , where #Iran-backed militias have been targeting protesters and critics. Iraqi activists are living in fear as assassinations are becoming increasingly frequent pic.twitter.com/RUDcX22bFn

Mr Kadhimi – a former intelligence chief – took office in May, five months after his predecessor resigned in response to mass protests in the capital Baghdad, Basra and other southern cities.

Until the Covid-19 pandemic reached Iraq, thousands of people were regularly taking to the streets to express their anger at endemic corruption, high unemployment, dire public services and foreign interference.

Their demands included sweeping away Iraq’s political system, which allocates positions to political parties based on ethnic and sectarian identity, encouraging patronage and corruption.

More than 500 protesters were shot dead by security forces and gunmen suspected of links to militias during the unrest. Thousands of others were injured.

Mr Kadhimi has pledged to hold those responsible for the killings to account and offered the dead protesters’ families $8,380 (£6,340) in compensation.

He has also set next June as the date for early parliamentary elections.