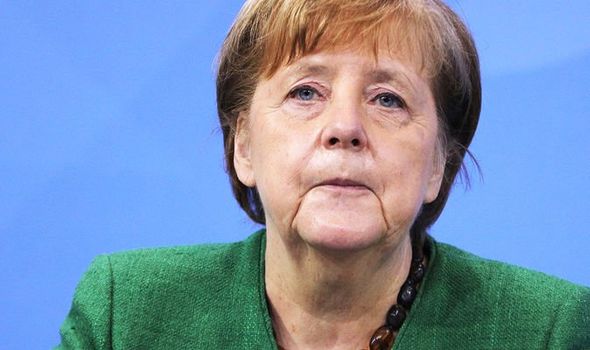 Juergen Windeler, the head of the Institute for Quality and Efficiency in Health Care (IQWIG), said the figure is “highly problematic”.

This comes after Angela Merkel and government officials agreed to a phased easing of restrictions earlier this month.

They are set to meet again on March 22.

He warned the “situation could get drastically worse” as cases could be as high as they were at Christmas.

Experts have warned several EU Member States are at the start of a third wave of the pandemic.

Italian Prime Minister Mario Draghi said: “More than a year after the start of the health emergency, we are unfortunately facing a new wave of infections.

“The memory of what happened last spring is vivid, and we will do everything to prevent it from happening again.”

Health minister Roberto Speranza claimed more than half of new infections were being driven by the UK variant.

He said: “The situation is not simple.

“The UK variant spreads 35 to 40 percent faster and represents 54 percent of total cases.

“The South African variant is also present, especially in the Bolzano area, and the Brazilian one is mostly in central Italy.”

Poland also announced a three-week partial lockdown starting this weekend with a full closure of schools as well as shopping centres and gyms.

French Prime Minister Jean Castex said it was time for more restrictions in the Paris region as the country enters a third wave.

On Tuesday, health authorities reported 29,975 cases, which is a jump of 4.5 percent compared to the week before, marking the sharpest week-on-week rise in a month and a half.

Mr Castex told BFM TV: “It seems to me that the time has come to consider new measures in the greater Paris region.

“There is no reason why we shouldn’t do in one region what we are doing in another.”

This comes after Germany, France, Italy and Spain as well as ortugal, Slovenia, Cyprus, the Netherlands, Ireland, Denmark, Sweden, Romania, Latvia, Austria, Lithuania, Luxembourg and Bulgaria have all halted the use of the AstraZeneca vaccine.

He said: “As of now, we do not know whether some or all of the conditions have been caused by the vaccine or by other coincidental factors.

“At this point in time, however, the benefits of the AstraZeneca vaccine far outweigh its risks and its use should continue, to save lives.”