Belgium dumped holders Portugal out of Euro 2020 to set up an enticing quarter-final clash with Italy – after the Czech Republic pulled off one of the shocks of the tournament by beating the Netherlands.

Tomas Holes and Patrik Schick scored in a 2-0 win in the first match on Sunday, meaning the Czechs will take on Denmark in the last eight after their 4-0 thrashing of Wales on Saturday.

And it was a stunning solo goal from Thorgan Hazard that proved decisive for Belgium, as they beat Portugal 1-0 to condemn Cristiano Ronaldo to an early exit from what was a record-setting fifth European Championships finals appearance for the Juventus star. The Czech Republic were helped by the Netherlands going down to 10 men in the 55th minute in Budapest, when Matthijs de Ligt was sent off for handball.

Holes gave his country the lead with a powerful header on 68 minutes – and Schick wrapped up victory with his fourth goal of the tournament 10 minutes from time.

The Czechs, who only qualified from England’s Group D in third place, will now face Denmark next Saturday.

Belgium might count themselves lucky to be joining them in the quarter-finals, given that Hazard’s swerving 25-yard effort on 42 minutes was their first shot on target.

Portugal dominated possession and produced a grandstand finish after rallying in the second half, with their most agonising chance coming when Raphael Guerreiro hit the post.

Meanwhile, UEFA have denied banning rainbow flags from the fan zone and stadium in Budapest following reports Netherlands and Czech supporters were having them confiscated by security staff. 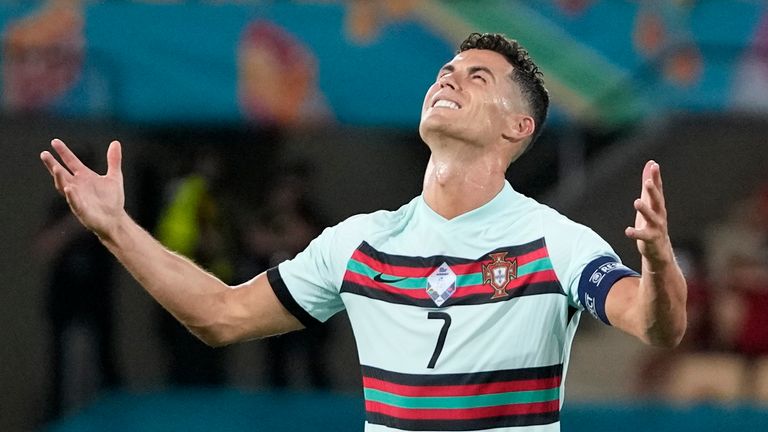 UEFA insists this is not because they have banned the internationally-recognised symbol of LGBT pride at venues, adding that it had requested that the Hungarian Football Federation allow rainbow flags to be taken into the ground.

A statement read: “UEFA had earlier today informed the Hungarian Football Federation that that rainbow-coloured symbols are not political and that, in line with UEFA’s Equal Game campaign, which aims at fighting against any type of discrimination, including against the LGBTQI+ community, such flags will be allowed into the stadium.

“Contrary to some reports in Dutch media, UEFA would like to clarify that it has not banned any rainbow-coloured symbols from the fan zone in Budapest and that the fan zone is under the responsibility of the local authorities.” It comes after UEFA controversially turned down a request from the mayor of Munich to have the Allianz Arena lit up in rainbow colours ahead of last Wednesday’s game between Germany and Hungary.

The proposal was made a few days after the Hungarian parliament passed a new law banning the promotion of homosexuality or gender reassignment to under-18s.

UEFA said that whilst the rainbow symbol itself was apolitical, the request was political and was therefore denied.