Tens of thousands of protesters have taken to the streets in recent days over the plummeting incomes in the country’s agricultural sector. Farmers across Spain are fearful that Britain’s exit from the European Union could mean less financial support from Brussels. The EU’s Common Agricultural Policy offers them almost one-third of their entire income.

Tomas Garcia Azcarate, of Spain’s National Research Council, said: “It seems inevitable to me that agricultural subsidies are going to decrease.

“The Gordian knot is to ensure that farmers recover that income in the market.”

The demonstrations have left prime minister Pedro Sanchez under immense pressure as his fledgling socialist government settles into office.

Spain is the EU’s largest producer of fruit and fresh vegetables, making up around a quarter of the bloc’s £29 billion industry. 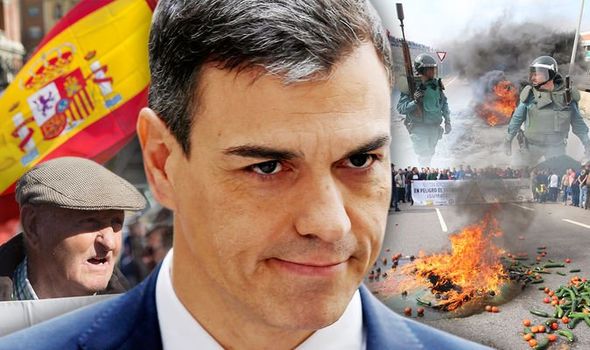 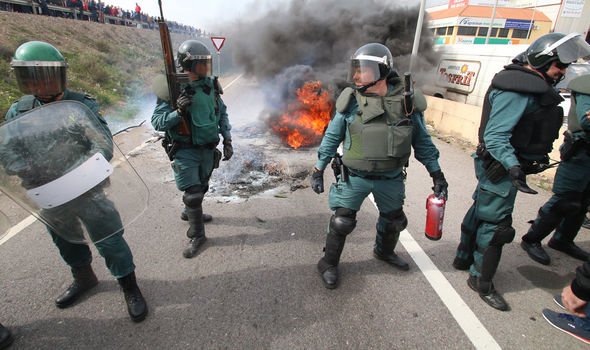 Luis Sancha, who grows olives and cereals near Madrid, fears family-run farms could soon be a thing of the past.

He told Bloomberg: “We got as far as the third generation but the fourth will be lost.”

He added that his son doesn’t see a future in farming so has moved to work as a hotel receptionist in Edinburgh instead.

Juan Salvador Torres, the general-secretary of the Agricultural Association of Young Farmers in Valencia, warned the cost of producing oranges is more than its retail value. 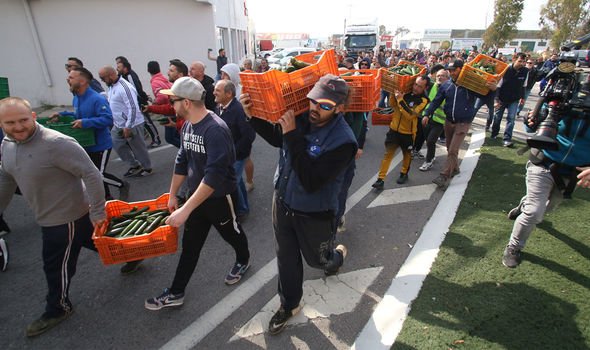 Brussels’ infamous red tape means a kilo of oranges costs between 17 and 18 pence to produce and only sells for 15 to 17 pence, he claimed.

He said: “We depend on the market. It forces us to compete at a disadvantage with third countries that do not meet our production requirements.

“There can be no same market in which you demand a lot more from your farmers and much less from those outside it.

“That is not fair, this is not reciprocity, these are not equal conditions for the same market.” 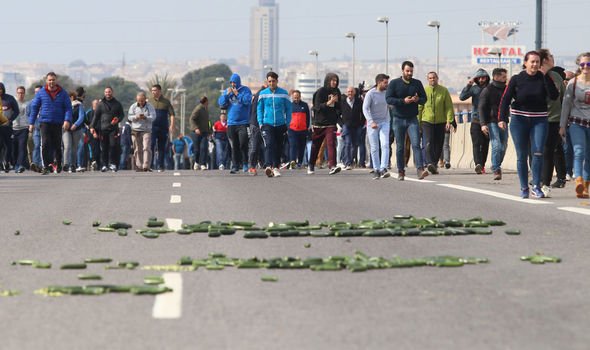 “I’m not picking. It’s not worth taking them off the trees.”

Unions and the government have also blamed supermarket chains for slashing the cost of fruit and vegetables in their stores.

Farmer Jorge Garcia Luna, who grows almonds and olives, says chain stores treat him and his colleagues as the “weakest link in the chain”.

Farmers want political action to guarantee retail prices for fruit and vegetables in order for them to make a living.

Some are also angry at the EU’s failure to reach a trade settlement with the United States over an illegal subsides for aircraft manufacturers row.

President Donald Trump slapped tariffs on some Spanish olives and olive oil in 2018 as he clamped down on Brussels.

Juan de Dios Segure, a 60-year-old olive farmer, said: “Why do I have to pay for the problems between Airbus and Boeing?”