The Gilets Jaunes and other protest groups have been a thorn in President Emmanuel Macron for over a year as the demonstrators argue against his pension reforms. Over the weekend riot police were caught on camera being heavy-handed with protestors on the streets in Paris in another controversial video. The footage showed riot police chasing protestors down a street only to corner the small group with reinforcements.

The protestors continue to flee as riot police batter the demonstrators indiscriminately.

Once cornered, the protestors are shown to be shoved to the ground at which point some were repeatedly hit.

The footage ends with the person recording the incident being ushered out of the area by police.

Last month French firefighters took to joining the Yellow Vest protestors on the streets of Paris. 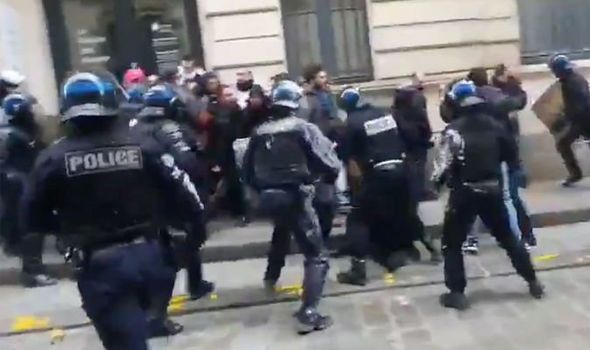 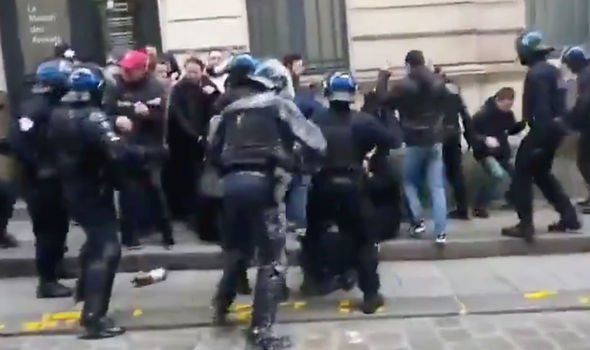 Multiple clashes erupted as the firefighters demonstrated against understaffing, threats to their government pension, lack of recognition for their work and lacklustre risk premiums.

Many complained their risk premiums did not match those of the police and the gendarmerie.

The riot police continue to use crowd control grenades despite controversies stemming from their use against both the Yellow Vest protestors and the pension reform protesters. 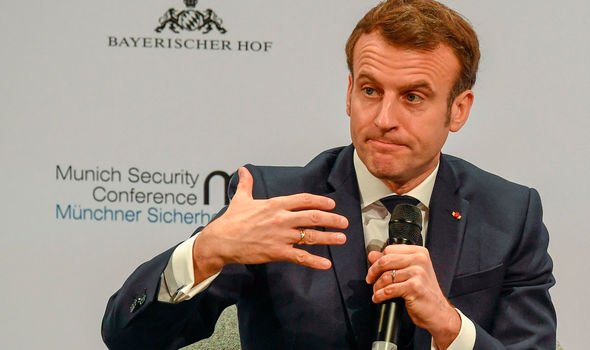 The riot police have continuously come under criticism for using too much force against protestors.

Police have defended these actions by insisting officers had to “systematically intervene” to stop “abuses committed by violent groups.”

The protests have continued to put pressure on Emmanuel Macron as demonstrators call for the controversial leader to resign. 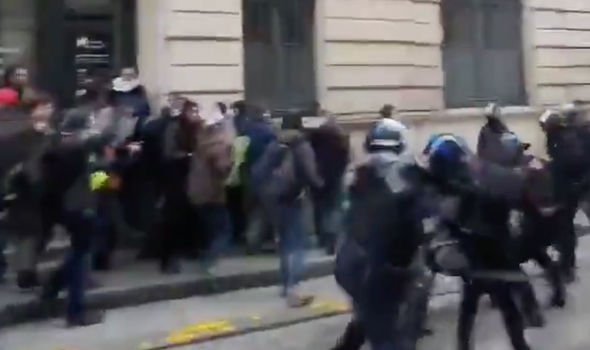 Commentator George Galloway predicted the protests and unrest from millions of French people could cause ripple effects in politics and the relationship between France and the EU.

Mr Galloway predicted France could be the next country to quit the European Union.

The new poll revealed that less than a third of French people – approximately 31 percent – view him favourably.

Mr Macron was also left humiliated by a series of leading MP defections from his own party in addition to the ongoing pension reform protests.