Across the UK, warm temperatures and sunny skies have dominated the weather in recent days with highs of 22C this past weekend. However, this good weather is not forecast to continue – with showers and potentially thunder on the cards this Bank Holiday weekend. Despite the recent warm weather, Britons are being urged to abide by the lockdown conditions and not venture outside unless for essential reasons.

Cooler air is on the way for the UK this weekend, which will knock the hot temperatures away from the time being.

The Met Office wrote on Twitter: “Some showery rain is likely this #Easter weekend, and as cooler air moves in there will be a drop in temperatures, though it will still be warmer than average for most.”

In their Easter forecast, the Met Office says that while the weekend will start warm, it will cool down into next week with the possibility of showers and thunderstorms.

Met Office Chief Meteorologist, Frank Saunders, said: “The Easter weekend starts dry and warm for many with temperatures possibly reaching as high as 24C in parts of London and the south-east on Bank Holiday Friday and Saturday also. 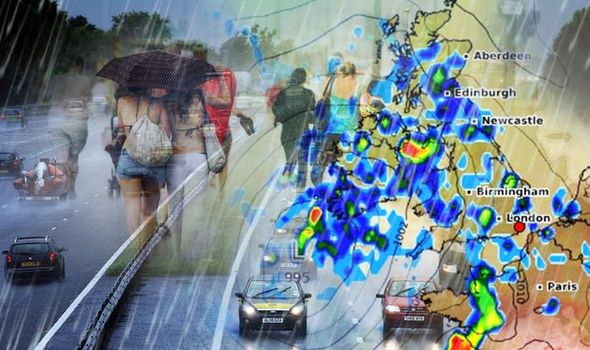 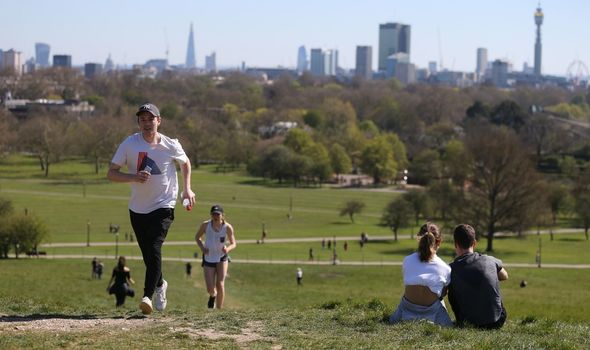 “As the weekend continues there is an increasing risk of showers, some of which could be heavy or thundery.

“By the start of next week, although it will be drier and sunnier again it will definitely feel cooler with temperatures reaching the mid-teens at best.

“Many of us will see plenty of dry, settled weather with sunny spells next week, with the driest conditions most likely in central and northern areas of the UK.

“Temperatures look likely to be slightly above normal with the warmest conditions likely in the south. 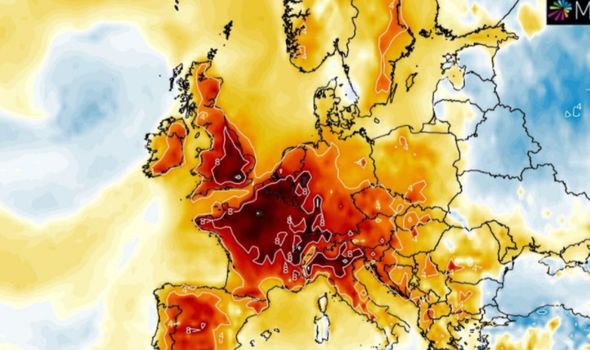 “There will be a return to a risk of frosts overnight in places, especially in central and northern areas.”

Met Office spokesman Craig Snell also said this weekend will get to a warm start, with temperatures of up to 24C in parts of the UK on Good Friday.

He said: “For many parts of England and Wales, we will see a dry day with plenty of sunshine and temperatures possibly reaching the low to mid-20s in central southern England.”

Mr Snell added to the north it is likely for cloudy conditions with the risk of showers.

DON’T MISS
Easter 2020: Six ways to celebrate Easter in lockdown [INSIGHT]
How to draw an Easter bunny [EXPLAINED]
Easter eggs DIY: How to make your own Easter eggs at home [INSIGHT]

He said: “Across Scotland and Northern Ireland there will be more clouds in the sky and the risk of showers.

“Temperatures will also be lower in the high teens.”

On Saturday, clouds and showers impacting the northern half of Britain will head eastwards throughout the day.

Mr Snell said: “The west will have more clouds and the risk of rain on the heavy side and temperatures just that little bit cooler on Saturday.” 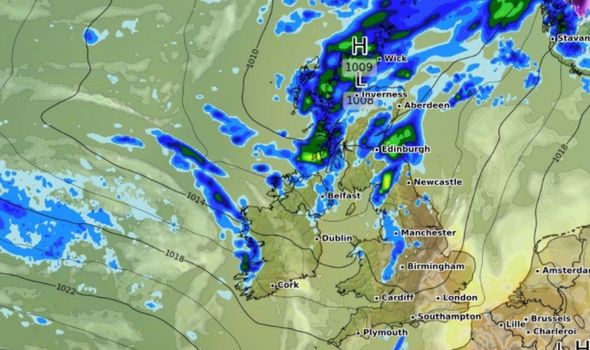 With the weather warming up again next week, bookmakers Ladbrokes have cut odds on April being the hottest on record.

Ladbrokes have cut odds from 6/4 to just 10/11 on this being the hottest April ever recorded.

Elsewhere, it remains just a 3/1 shot that the hottest April day ever is recorded before the month is out, with the record currently being 29.4C.

Ladbrokes spokesman Alex Apati said: “It looks as though we’re set for a record-breaking month of April sunshine.”

Met Office Forecast for the rest of this week

Much of England and Wales fine and warm but some eastern coastal counties much cooler.

Northern Ireland brightening and warming up, while Scotland more mixed, some rain in the northwest.

Outlook for Friday to Sunday

Fine and warm for much of England and Wales Friday and Saturday, with the risk of some heavy showers, these more widespread Sunday.

More unsettled for the north and west.