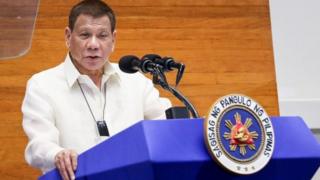 Philippines’ president Rodrigo Duterte has once again told people to disinfect their face masks with petrol – insisting he was “not joking”.

He had made similar remarks last week – but officials were quick to correct him, and suggested it was a joke.

Health officials also said cloths masks should be washed normally, and surgical masks replaced after use.

But on Friday, the president doubled down – saying “what I’ve said was true… go to a gasoline station”.

There is no evidence that gasoline can disinfect masks; having prolonged contact with it can be harmful; and pouring flammable liquids can be a fire risk.

What did Mr Duterte say?

Referring to his earlier comments, Mr Duterte said: “They [critics] said, ‘Duterte’s insane.’ Stupid! If I’m insane, you should be the president, not me.

“What I’ve said was true. If alcohol isn’t available, especially for the poor, just go to a gasoline station, and use [gas] to disinfect.

What did he say last week?

Mr Duterte said those who didn’t have cleaning supplies could use gasoline as a disinfectant to clean their masks.

“At the end of the day, hang [the mask] somewhere and spray it with Lysol if you can afford it,” he said, referencing a popular disinfectant brand.

“For people who don’t [have Lysol], drench it in gasoline or diesel… just find some gasoline [and] dip your hand [with the mask] in it.”

“I can’t believe that after four years of him as president, you still don’t know [him],” said Mr Roque, according to news site Rappler.

“[It’s only a] joke. Why would we use gasoline for washing?”

In February – shortly after the Philippines became the first country to register a Covid-19 death outside China – President Duterte moved to downplay the issue, saying the virus would eventually “die a natural death.”

But after a month-long lull in recorded cases – a period which critics say wasn’t used effectively to mass test and contact trace cases – numbers began to rise.

He used special powers granted to him by Congress to realign national budgets and put soldiers on the streets to tackle the crisis.

To do so, he was required to update the nation each week with a national address.

The president made the addresses late at night. He was often late to start, and was criticised on social media for being rambling and confusing, and at times veering off topic to threaten his enemies.

Mr Duterte’s former spokesman, Harry Roque, was brought back to manage the message – and the evening addresses began to be edited and released the following morning.

A YouGov online survey found that Filipinos who rated the Duterte government’s response to the virus as “very well” or “somewhat well” fell from 72% in May to 51% on 29 June.

Filipino pollsters – who have repeatedly recorded strong approval ratings for the President – haven’t been able to do door-to-door surveys during the outbreak.

Although compared to other Covid-19 global hotspots, the Philippines’ numbers of recorded cases and deaths are lower, so too are testing figures – with only around 1% of the population screened so far.

What is the virus situation in the Philippines?

A daily high of 3,954 cases was recorded in the Philippines on Thursday, bringing the total number of cases to 89,374.

There have been just under 2,000 confirmed Covid-related deaths.

Mr Duterte announced on Friday that restrictions in the capital Manila would remain until mid-August.

Manila is currently under a general community quarantine – which limits the movement of the elderly and children, and imposes other restrictions.

The president also promised that free vaccines would be given out – when one is eventually released – with lower-income Filipinos prioritised. 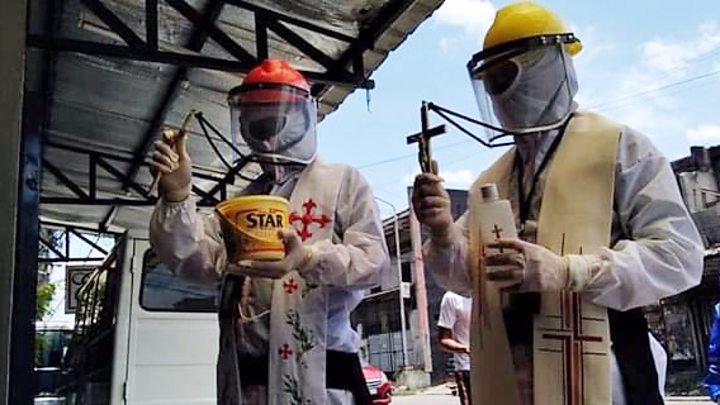