Japan’s Prime Minister announced he would be resigning from office after the return of a chronic illness. After the announcement, the US president called the leader to discuss foreign policy issues. It comes as Mr Trump has touted foreign relations in an effort to drum up support for his re-election campaign.


He said: “Just had a wonderful conversation with my friend, Prime Minister Shinzo Abe of Japan, who will be leaving office soon.


“Shinzo will soon be recognised as the greatest Prime Minister in the history of Japan, whose relationship with the USA is the best it has ever been. Special man!” 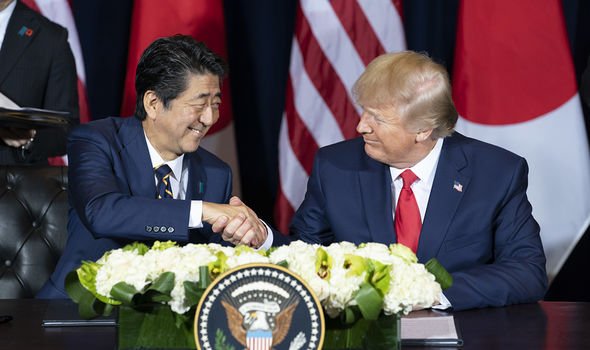 
He also claimed they discussed Japanese citizens abducted by North Korea, which has caused major tension between the two nations for decades.


Mr Trump and Mr Abe also discussed the ongoing coronavirus pandemic, as well as the US and Japan’s “deep friendly relationship”. 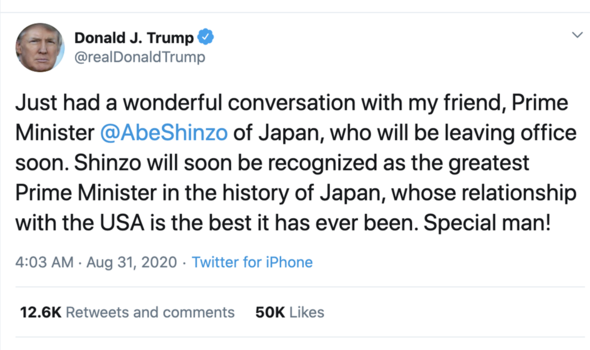 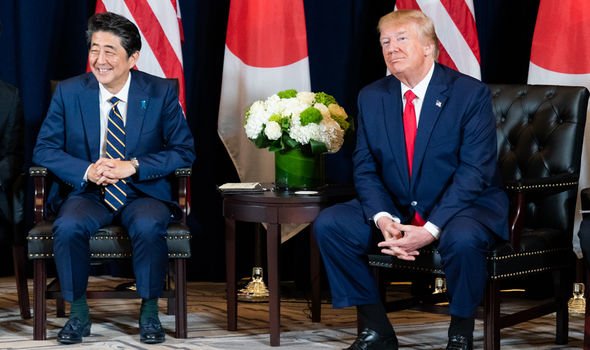 Ahead of the phone call, Mr Trump told reporters at Air Force One on Friday he was concerned for the outgoing prime minister’s health.


He said: “I want to pay my highest respect to Prime Minister Shinzo Abe … a great friend of mine.


“I just feel very badly about it.”


The US president added Mr Abe loved his country very much, and stated his plans to call him.

Mr Abe resigned from his position to undergo treatment for ulcerative colitis, a chronic digestive condition that also forced him to step down as premier in 2007.


He was the longest serving prime minister in Japan’s history, serving one term from 2006 to 2007, and three from 2012 to present.


In his resignation speech, he said: “I made a judgement I should not continue my job as a prime minister.


“I would like to sincerely apologise to the people of Japan for leaving my post with one year left in my term of office, and amid the coronavirus woes, while various policies are still in the process of being implemented.” 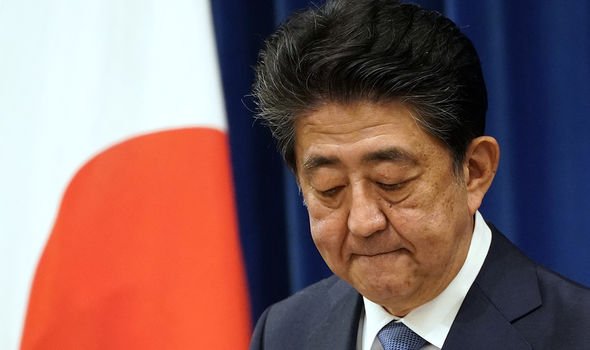 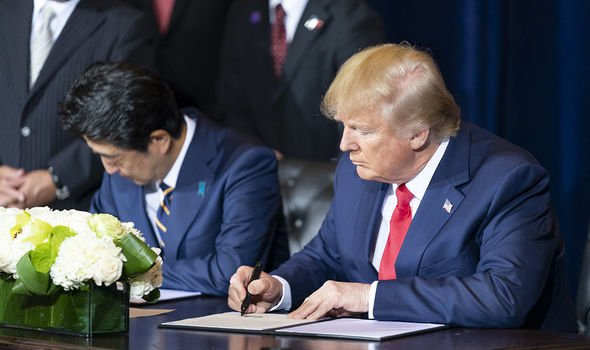 Mr Abe’s successor will take over in September at the earliest, but that is dependent on the Japanese parliament’s vote.


The prime minister’s resignation has also thrown Japan’s trade deal with the UK into chaos.


In 2018, Mr Abe said Britain was welcome to join the Comprehensive and Progressive Agreement for Trans-Pacific Partnership with “open arms” after it left the EU.


The duo cited the need for further negotiations on how to handle Japanese tariffs on British blue cheese.