AHMEDABAD, India (Reuters) – Crowds were lining up outside a giant stadium in western India on Monday ahead of U.S. President Donald Trump’s first visit to the country during which the two sides will aim to reset relations that have been buffeted by a trade spat. 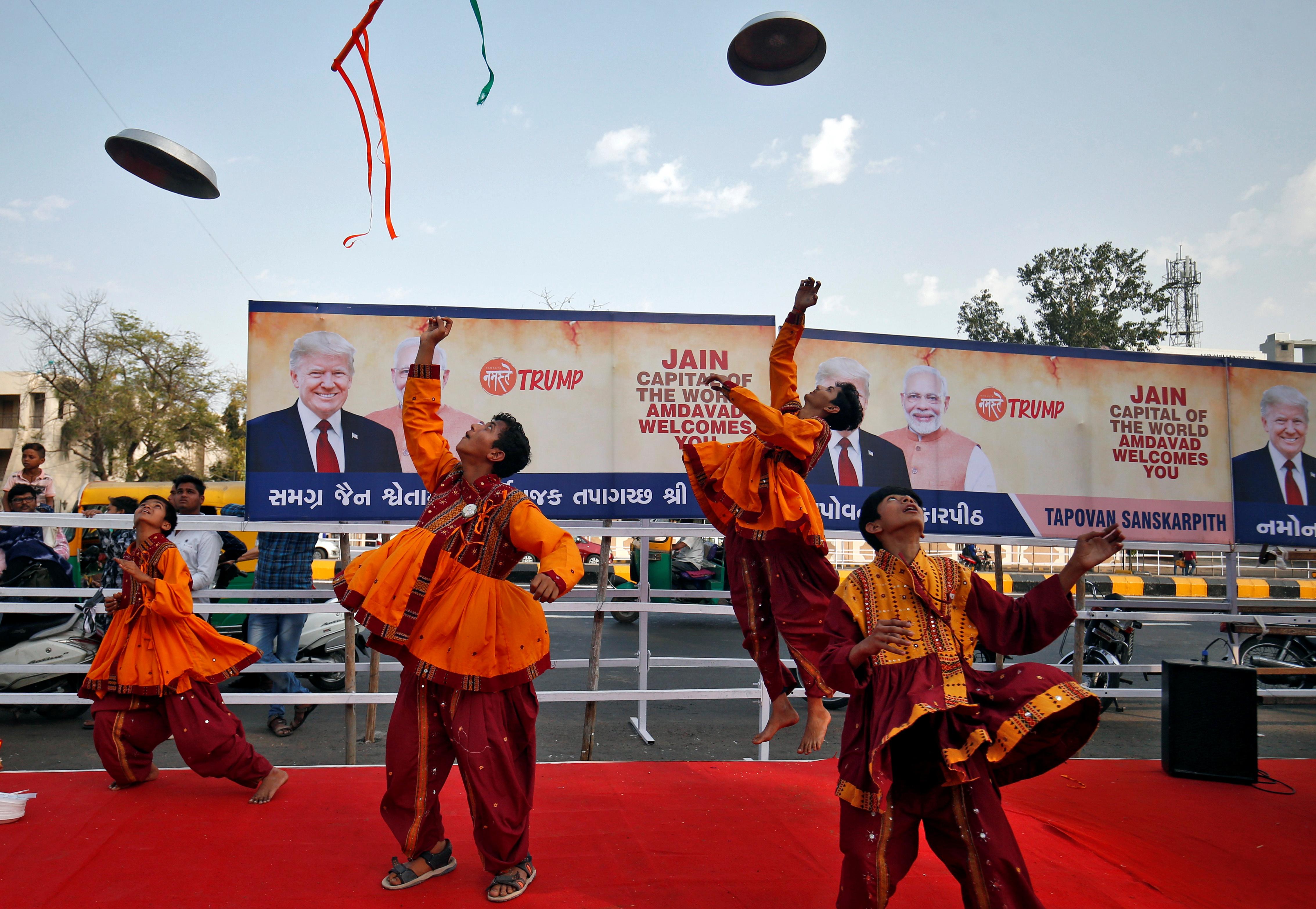 Trump lands in Ahmedabad, the largest city in Indian Prime Minister Narendra Modi’s home state of Gujarat, a little before noon local time (0630 GMT). A road show is planned and a huge reception will be held in a 110,000-seat cricket stadium said to be the world’s largest.

In the stadium, many people were wearing customized white hats saying “Namaste (Greetings) Trump”, while workers handed out thousands of cardboard masks of the U.S. president.

“We are ready to come to India, we are on our way, we will be meeting everyone in a few hours,” Trump tweeted in the Hindi language before he landed.

Modi, who has built a personal rapport with Trump, is pulling out the stops for Trump’s visit even though a trade deal that Washington was pushing for has run into problems.

The rally in Ahmedabad will be a larger version of the “Howdy Modi” rally that Trump and Modi jointly appeared at in Houston to a jubilant crowd of 50,000 Indian Americans last year, where Trump likened Modi to Elvis Presley for his crowd-pulling power.

Many roads were blocked off in Ahmedabad, shops shut and police stationed on rooftops and balconies. School children boarded buses bound for the stadium shouting “We love Trump.” Others were carrying Indian flags.

Trump, who seeks re-election in November, routinely gets the biggest audience of any candidate in the U.S. presidential race, ranging up to 20,000 or so, and he has been grudgingly admiring of Modi’s ability to get a bigger crowd than him.

From Ahmedabad, he heads to Agra for a sunset visit to the iconic Taj Mahal mausoleum, before landing in New Delhi for a summit with Indian officials and business leaders.

But the prospects of resolving a wrangle over trade that led to both countries imposing retaliatory tariffs remains elusive. Indian and U.S. officials have both said progress is unlikely to be made until after the U.S. election.

The two sides have been arguing over U.S. demands for access to India’s poultry and dairy markets, Indian price controls on medical devices such as stents and stringent local data storage rules that U.S. technology firms say will raise the cost of doing business.

Modi’s government has sought restoration of trade concessions that Trump withdrew in 2019 and greater access to U.S. markets for its pharmaceutical and farm products.

The two countries are expected to announce defense deals including an Indian navy plan to buy helicopters from Lockheed Martin worth $2.6 billion.