Hong Kong has begun a free universal Covid-19 testing programme, despite criticism that it is not effective and could be misused for surveillance.

The voluntary mass testing is being conducted with the help of medical staff from mainland China.

A health workers union has criticised the effort as an inefficient waste of resources while activists have said it could be used to collect DNA samples.

Authorities have dismissed the criticism as a smear campaign.

Why is Hong Kong doing the mass testing?

Hong Kong has so far managed to keep the virus at a comparatively low level with just under 5,000 confirmed infections.

But there are fears that several smaller waves might lead to a larger outbreak which could then spiral out of control.

Authorities hope the universal testing effort will give an accurate picture of the spread and help to contain the pandemic.

Testing got under way on Tuesday with more than half a million residents so far having registered. Hong Kong has a population of about 7.5 million. 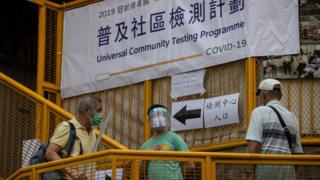 Health workers are taking samples at more than 140 collection centres across the city.

China has previously tested the entire population of Wuhan, the city which saw the first and worst outbreak within China.

Why is the testing controversial?

A union of healthcare workers has criticised the project, saying mass testing is not an efficient way to tackle the pandemic.

The 20,000-member Hospital Authority Employees Alliance said focused tests would be a much better way to use resources.

Union leader Winnie Yu has called on people not to participate and told reporters the massive testing was essentially being done to please Beijing.

“They shall do whatever they can to please the central government of China, even if it means placing politics above all things else,” she said.

Health experts are also raising concerns that faulty tests might return false negatives and that as many as five million people would need to get tested to end the current third wave of infections.

An ongoing crackdown on government critics in Hong Kong is undermining trust with authorities.

Some activists have voiced fears the samples might be used to harvest residents’ personal data and DNA.

He said it “fuels more concerns that the plan is a large-scale DNA collection”, creating a way for a “China-style surveillance regime”.

1. Defying doubts, #HKgov will impose universal testing in #HK, a citywide DNA collection viewed as a way for more surveillance. Medical experts repeatedly raised concerns below that are completely ignored by gov: pic.twitter.com/Q4ODI5lgxt

Tensions are high between pro-democracy groups in Hong Kong and the Chinese government after Beijing imposed a new national security law in the territory in June.

The law, which was widely criticised internationally, allows for life in prison for those China determines to have engaged in acts of secession, subversion and collusion with foreign forces.