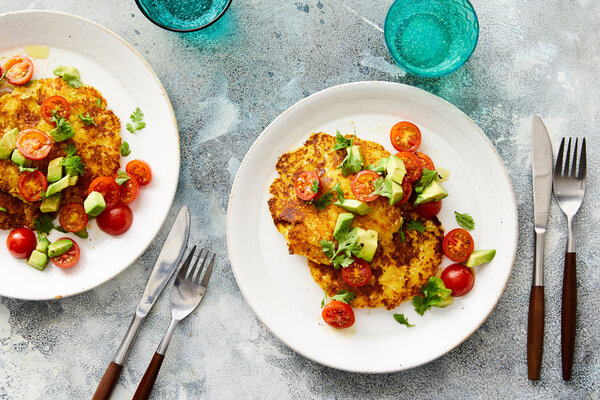 In Colombia, where the food stylist Mariana Velásquez grew up, every region has its own variety of arepas. Some have more than one. Bogotá, Ms. Velásquez notes in her new cookbook, “Colombiana,” has at least 72 variations all by itself.

“From the sweet yuca arepas of Cesar to the anís arepas of Magangué, from the breadfruit arepas of San Andrés to green chickpea arepas from the Tenza Valley,” she writes, for Colombians, “arepas are simply their native bread.”

An ancient type of flat, round cake made from boiled, dried corn ground to a flour, arepas are also a cornerstone of Venezuelan cuisine, and are found in Bolivia, as well as parts of Ecuador and Peru.

When Ms. Velásquez set out to write her cookbook — a celebration of traditional and modern Colombian cuisine — there was no question that several recipes for arepas would be included. The challenge was choosing which ones.

“There are just so many different kinds,” she told me over the phone, “but arepas de choclo were essential because they are special, unlike the others.”

The word “choclo,” she explained, means sweet corn in Quechua, the language of the Incas, which is still spoken in parts of South America. In arepas de choclo, corn kernels are mixed with the usual ground corn to make the batter.

But even arepas de choclo can take many forms.

“They can be thin enough to fold in half, or thicker like a cake,” Ms. Velásquez said. “You can fry them over an open fire, or wrap them in plantain leaves to give them a specific taste.”

Sweet and moist in the center, arepas de choclo are usually filled with cheese. If you’ve ever had mozzarella-stuffed arepas at a street fair, you’ve sampled one of their many iterations.

Ms. Velásquez’s recipe is on the delicate side, and extremely straightforward. Corn kernels are puréed, then mixed with masarepa (precooked cornmeal) and two kinds of cheese. If you can’t find masarepa (P.A.N. is one brand available in large supermarkets), instant polenta makes a good substitute, she said. But don’t use masa harina, which is a different product.

In her take, Ms. Velásquez rounds out the pancakes with a tomato and avocado salad zipped up with lemon juice.

Although in Colombia, arepas de choclo are often eaten as a snack, these can make a wonderful meatless summer meal that is perfect for brunch, lunch or a light dinner.

“Arepas are something that everybody loves,” Ms. Velásquez said, “the kind of recipe that brings all kinds of people together to enjoy.”