The news about AstraZeneca’s drug came on the same day that the company and others pledged to thoroughly vet any vaccine.

Britain plans to limit most gatherings to six people after a surge in new cases. 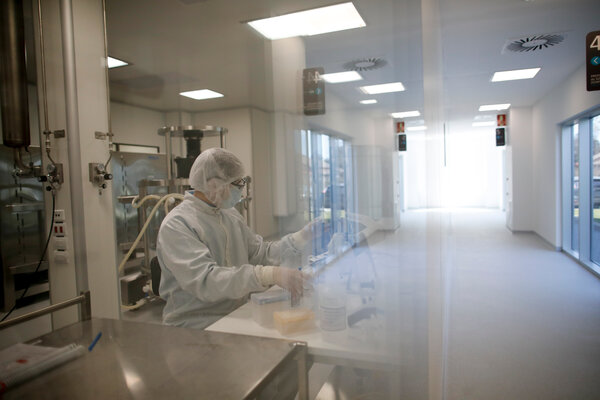 As drugmakers pledge to thoroughly vet a vaccine, one company pauses its trials for a safety review.

The pharmaceutical company AstraZeneca halted global trials of its coronavirus vaccine on Tuesday because of a serious and unexpected adverse reaction in a participant, the company said.

The trial’s halt, which was first reported by Stat News, will allow the British-Swedish company to conduct a safety review. How long the hold will last is unclear.

In a statement, the company described the halt as a “routine action which has to happen whenever there is a potentially unexplained illness in one of the trials, while it is investigated, ensuring we maintain the integrity of the trials.”

The news of AstraZeneca pausing its trial came the same day the company and eight other drugmakers made a joint pledge to “stand with science” on coronavirus vaccines, reaffirming that they would not move forward with such products before thoroughly vetting them for safety and efficacy.

President Trump has repeatedly claimed that a vaccine could be available before Election Day, Nov. 3, heightening fears that his administration is politicizing the race by scientists to develop a vaccine and potentially undermining public trust in any vaccine approved.

The companies did not rule out seeking an emergency authorization of their vaccines, but promised that any potential coronavirus vaccine would be decided based on “large, high quality clinical trials” and that the companies would follow guidance from regulatory agencies like the Food and Drug Administration.

Some said the halt of AstraZeneca’s trial was evidence that the process was working as it should.

“At this stage, we don’t know if the events that triggered the hold are related to vaccination,” said Dr. Luciana Borio, who oversaw public health preparedness for the National Security Council under Mr. Trump and who was acting chief scientist at the F.D.A. under former President Barack Obama. “But it is important for them to be thoroughly investigated.”

In large trials like the ones AstraZeneca is overseeing, the company said, participants do sometimes become sick by chance, but such illnesses “must be independently reviewed to check this carefully.”

The company said it was “working to expedite the review of the single event to minimize any potential impact on the trial timeline” and that it was “committed to the safety of our participants and the highest standards of conduct in our trials.”

A person familiar with the situation, and who spoke on the condition of anonymity, said that the participant had been enrolled in a Phase 2/3 trial based in the United Kingdom. The individual also said that a volunteer in the U.K. trial had been found to have transverse myelitis, an inflammatory syndrome that affects the spinal cord and is often sparked by viral infections. However, the timing of this diagnosis, and whether it was directly linked to AstraZeneca’s vaccine, is unclear.

AstraZeneca declined to comment on the location of the participant and did not confirm the diagnosis of transverse myelitis. “The event is being investigated by an independent committee, and it is too early to conclude the specific diagnosis,” the company said.

AstraZeneca’s vaccine is currently in Phase 2/3 trials in England and India, and in Phase 3 trials in Brazil, South Africa and more than 60 sites in the United States. The company intended for its U.S. enrollment to reach 30,000.

AstraZeneca is one of three companies whose vaccines are in late-stage clinical trials in the United States.